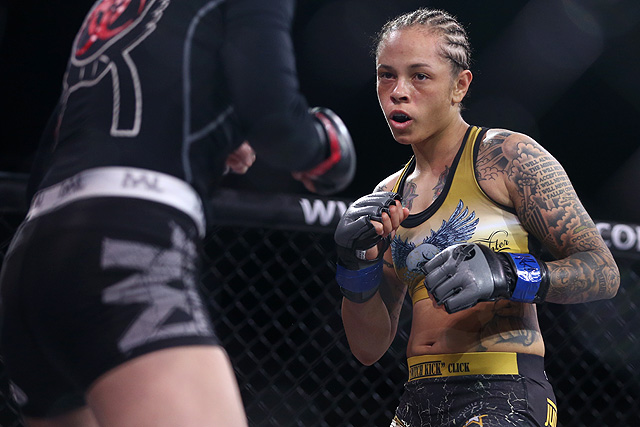 It’s hot. It’s dry. Blood pumping. Heart pounding. You never know what’s going to happen and when. Sometimes things will go crazy, and sometimes nothing will happen for hours, days or even weeks. No matter what, you’re always ready to go, and in this game, you play for keeps.

Military tours are no joke, and especially not on the ground in the middle of a combat zone. It is a life-or-death matter, and not everyone comes home on two feet. Many soldiers are jacked up and loving it, but there are others who wonder why they even did it. Everyone has their reasons.

“I wanted to join the military because my father, stepfather, mom and uncles are all active duty,” Sarah Click told Combat Press. “I wanted to join the Marine Corps, but my mom wanted me to join the Air Force, so we kind of compromised, and it turned out to be the Army. I joined ROTC when I was in college, and I was contracted in the National Guard as a cadet, so you get assigned to an actual unit, and my unit was deploying the following year, so I dropped my commission and volunteered for the deployment.”

Click was raised in a military family, obviously. Her mom started her off in martial arts as a kid. However, the traditional arts, like taekwondo, karate and judo, just weren’t of interest.

“I didn’t get any belts, because they weren’t really my thing, so I was in and out of them,” Click said. “I started when I was four, so, throughout my childhood, I just bounced around. I started Muay Thai when I was 16, so I just ran with that.”

Click found Muay Thai when she was still in high school. Upon graduation, she went to Massachusetts Maritime Academy to study emergency management, but then she opted for deployment her junior year. College was put on hold. Instead of a classroom, Click ended up in the thick of it in the Kandahar province in Southern Afghanistan.

“It was interesting,” Click said. “Adrenaline is always up. We were just always ready to go.”

After living a life of always being alert and ready, Click came home to Massachusetts. She got right back to the gym to pick up where she left off. School was a different story.

“When I was 16, they started having me do more of the jiu-jitsu and started wrestling, even though I wasn’t really into it that much,” Click explained. “I just kept doing that with my coaches, and eventually it turned into MMA. But I didn’t start fighting until after I got back from my deployment, like six years ago. I tried to go back to school after deployment, but everything’s kind of boring then. You can’t really pay attention.”

Click made her amateur MMA debut in April 2014. By August 2015, she was already 5-2. She turned pro in March 2016, and she is now sitting at 2-2 with appearances in some top promotions. Her battle-tested will and penchant for adrenaline have led her down an interesting path.

“My amateur career was pretty fast,” said Click. “I did fights every other month. So, since I moved on to pro, I’ve been fighting maybe twice a year, with professional boxing matches in between and professional Muay Thai fights between, just to stay loose. I’ve been really working the wrestling and all that, trying to get really well rounded.

The ride has now landed Click in the Legacy Fighting Alliance. On Friday, she makes her promotional debut against Hailey Cowan at the Bomb Factory in Dallas. The venue is approximately a three-hour drive from the Fort Hood military base in Texas.

“I’m really, really excited about it,” said the Army Sergeant. “I mean, I fought for Bellator and Invicta, and they’re both great promotions too, but LFA is really, really big. It’s a well-organized promotion.”

Cowan has a different background than most fighters. She competed in acrobatics and tumbling in college. After college, she started training in MMA. Cowan made her amateur debut in August 2017 and her professional debut in May 2018. She is now sitting at 2-1 as a pro, and both of her wins were knockouts. Cowan also has a five-inch height advantage over Click.

“I think it’s obviously going to be a really hard fight,” Click admitted. “I’m fighting above my weight class. I think this is my first MMA fight at 125 [pounds], because I usually fight at 115. She’s a really strong girl, so I just need to go out there and play my game. I know she’s really tough. She has a sick head kick. She almost looks like Holly Holm with her movement. I’m excited.”

Don’t take Click’s assessment of her opponent as a cause for concern. She’s been through actual war, where people were trying to kill her with heavy artillery. Combine that with a decade of serious martial-arts training, and she will be good to go. She doesn’t get nervous anymore. She gets ready.

“I guess I’m always looking for that adrenaline rush,” said Click. “I love fighting. The military is always just high strung — the deployment was really high strung — so this is just a way for me to not go crazy. It’s my outlet. It really works. I’m a really aggressive fighter because of it.”

Click is still on active duty and works a regular job in the Massachusetts Emergency Operations Center. She is also trying to get a job with one of the local fire departments. When she’s deployed, she’s an engineer, digging foxholes and building bunkers. With six more years on her military contract, who knows where she will be next, but the Team Sityodtong prospect will certainly be in the cage on Friday night at LFA 63.

“All my battle buddies down there said they’re going to make a big surprise visit, so we’ll see if we can take over the crowd,” said Click.