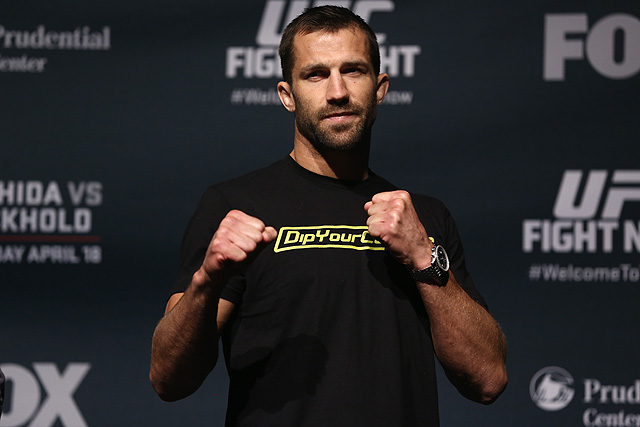 Luke Rockhold vs. Chris Weidman 2 Was the UFC’s Only Option

There has been a lot of discussion about whether Chris Weidman is one of those deserving candidates. The previously undefeated middleweight had successfully defended his title three times before coming undone at UFC 194 in December against current champion Luke Rockhold. While many may argue that it was a sloppy spinning wheel kick that was the ultimate demise of “The All-American,” it was the end of a slippery slope that he was already well on his way down.

Weidman started the fight well. The first round really could’ve gone either way. But that didn’t last long. Rockhold dominated the second round, showing off his athletic prowess and technical ability by throwing out devastating leg and head kicks and utilizing his powerful counter striking as Weidman stalked him around the Octagon. Despite Weidman getting the early takedown in the third round, Rockhold easily got back to his feet. The now infamous spinning wheel kick came soon after and provided Rockhold with his opening. He took Weidman to the ground and used him as a human punching bag before Weidman was saved by the bell. The fight could have easily been stopped at this point, but we found ourselves in the fourth round, where Rockhold made short work of the New York native to earn the finish via TKO.

No one can argue that Weidman isn’t the epitome of a champion. He never gave up even though it was clear that he had nothing left to give by the time referee Herb Dean called an end to the fight. He never made excuses for his performance either. But does that mean he should get a rematch?

My immediate reaction is no. He just wasn’t good enough. Period. His wrestling, which is his biggest weapon, was completely shut down. Meanwhile, Rockhold obliterated him on the feet. A rematch should be between two guys or girls that go the distance in such a fashion that to choose a winner is like splitting hairs — think Robbie Lawler vs. Carlos Condit or T.J. Dillashaw vs. Dominick Cruz. Sure, exceptions can be made if someone is winning a fight and they make a mistake, but in this case Weidman was not winning the fight and the mistake he made, while costly, was just the tip of the iceberg. On that basis alone, the UFC should give someone else a shot.

The problem is, there isn’t anyone else.

You see, Yoel Romero was the obvious choice for Rockhold’s first title defense. “The Soldier of God” is on a seven-fight winning streak and hasn’t lost since 2011. He also beat Ronaldo “Jacare” Souza, his biggest competition for a title shot, at UFC 194 in a somewhat controversial decision victory, but it was a win nevertheless. Romero has also beaten Lyoto Machida, Tim Kennedy, Brad Tavares and Derek Brunson, all of whom are talented fighters and well established within the top 15 of the division. It’s safe to say that all of the above warrants a title shot, but it wasn’t to meant be. Following the Jacare fight, it came to light that Romero had failed an out-of-competition drug test from the USADA, resulting in an immediate suspension. Subsequently, Romero has been removed from the official UFC rankings and sidelined indefinitely, taking him out of title contention.

Vitor Belfort was another name thrown into the mix. The Brazilian was the one that handed Rockhold the second loss of his professional career back in 2011. A rematch between the two prolific strikers would make for fun viewing, but the UFC was adamant that Belfort secure another win over a top competitor before getting a third crack at the middleweight belt. That will come in May when Belfort faces Souza in a much anticipated No. 1 contender bout.

As it stands, Rockhold has managed to dismantle three of the top five fighters in the division — Weidman, Machida and Michael Bisping. Anyone else that is noteworthy at this stage — Souza and Belfort — are already booked for fights, with the balance not being ready for a title run.

Whether we like it or not, the Rockhold/Weidman rematch is really the only title fight to make at the moment. So, despite not necessarily agreeing with it, I can understand why the UFC went ahead and booked it for UFC 199. It really was just a case of too few options, a willing champion and a desperate challenger.