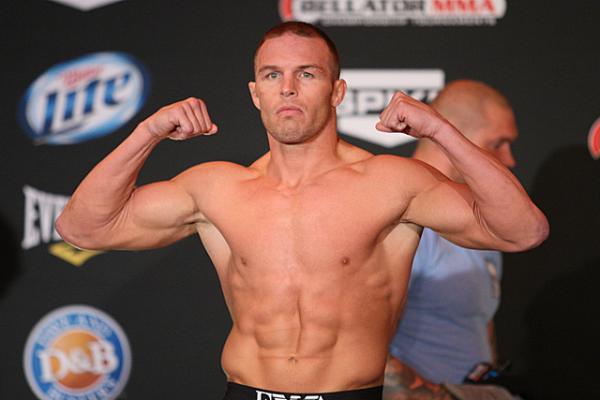 On Thursday, Oct. 16, Bellator MMA hosted the weigh-ins for its 129th event which takes place Friday, Oct. 17, from the Mid-America Center in Council Bluffs, Iowa.

In the night’s main event, a pair of UFC veterans will square off as welterweights Paul Bradley and Josh Neer lock horns. Bradley has split his two bouts inside the Bellator cage, edging former title challenger Karl Amoussou, but falling short against fellow Strikeforce veteran Nathan Coy in his last outing. The 31-year-old Neer has won three straight since his UFC release, with all three wins coming before the final bell. “The Dentist” needed less than two minutes to submit Travis Coyle at VFC 43 in August.

The main card also features hard-hitting veterans Houston Alexander and Virgil Zwicker. The 42-year-old Alexander has won three of his last four, including a decision win over Matt Uhde at Bellator 117 in April. Eleven of his 16 career wins have come via strikes. Zwicker, meanwhile, began his career with eight straight wins, but has gone just 4-4 since. Like his opponent, the Strikeforce veteran has stopped nine of his 12 wins by strikes.

The 11-fight event kicks off Friday with a live stream of the preliminary card on Spike.com beginning at 7 p.m. ET. The four-fight main card airs live on Spike TV at 9 p.m. ET.