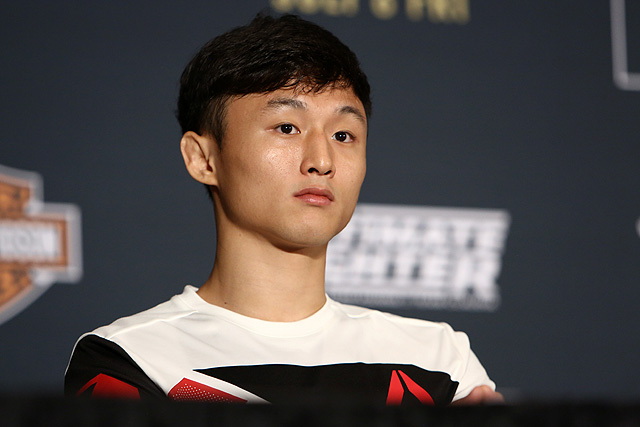 Was Doo Ho Choi Just a Product of the UFC’s Hype Machine?

After what seemed to be an exciting eight minutes of fighting on Sunday, Doo Ho Choi once again was on the end of a bitter defeat. The South Korean fighter was stopped halfway through the second round by his opponent, fellow headliner Jeremy Stephens.

After one of the most spectacular fights in the history of the sport against Cub Swanson in December 2016, Choi’s popularity rose drastically. He sat on the sidelines due to injuries, but that just made his return to action all the more anticipated.

Stylistically, the pairing of Choi against Stephens was an excellent clash. It had every element anyone would look for in a “Fight of the Night” contender. As long as the fight lasted, it did deliver. Both guys tagged each other multiple times before the last exchange of the fight, where Stephens managed to drop Choi with an overhand right and eventually finish him with vicious ground-and-pound. The bout did earn the “Fight of the Night” award, too.

There’s no doubt that the fans want to see Choi. Every time “The Korean Superboy” steps inside the Octagon, a barnburner is almost guaranteed to follow. The problem that Choi has is not whether he can deliver good fights to the fans. It’s about whether he can win against the top-ranked fighters in the division, such as Max Holloway, Frankie Edgar or Brian Ortega.

So, is Choi just another failed hype machine?

As of right now, we shouldn’t go that far. The two men who defeated Choi in the UFC are both extremely experienced veterans with spectacular punching power and toughness. Choi is still only 26 years old, too, and he has a lot of room to improve. Fans shouldn’t be completely discouraged about the South Korean’s recent losses. It may have changed his near-future plans quite a bit, but with Choi going off to a mandatory military service in Korea soon, he will have plenty of time to make changes outside of the Octagon.

There is no room for complacency whatsoever in Choi. With one more loss against a top-10 fighter, he may completely lose any chance of entering the featherweight top 10. The division is slowly filling up with prospects, so the window of opportunities to climb up the ranks is slowly getting smaller. Choi needs to make instant changes in his game all around, as it’s been proven that a right hand is simply not enough at the higher levels of the sport. Choi’s lack of defense on the feet and inability to fight with his back up against the fence has led him to take some very unnecessary damage. He cannot afford to continue to take damage the way he has recently.

Choi’s potential hasn’t gone away. He still has one of the best technical-striking abilities in the division, but he needs more. In order to propel himself up toward title talks, much-needed changes must be made first. With some changes in his game, Choi can become a serious threat to anybody in the top five. It’s all a question of whether he can make adjustments.