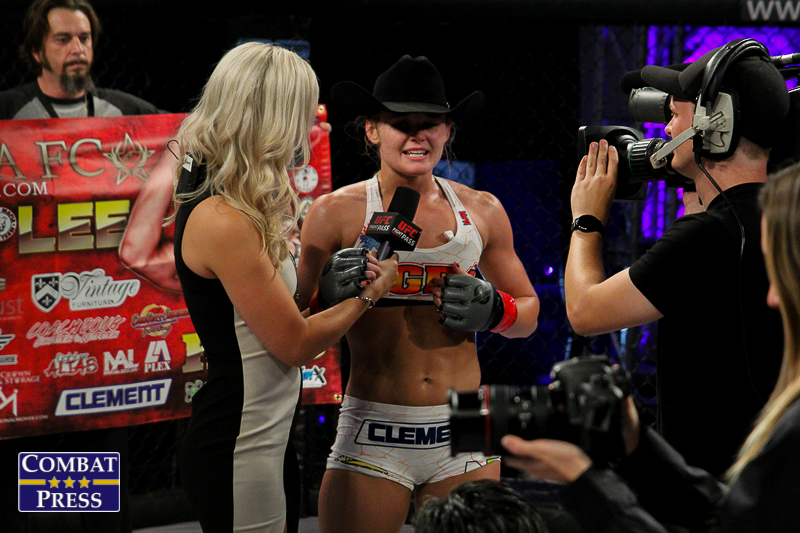 The Delay of Andrea Lee’s UFC Debut Is Perfectly Justifiable

The effect steroids has had on the sport is so incredibly groundbreaking that it’s gotten to the point of putting the career of arguably the best fighter in the world, Jon Jones, in serious jeopardy. And deservedly so, too. Whether or not the best fighters are being affected, the USADA is doing what it has to do to maintain the credibility of the sport.

Recently, female flyweight fighter Andrea Lee, who’s fought in excellent organizations like Invicta FC and Legacy FC, was set to make her UFC debut at UFC 216, which takes place on Saturday, Oct. 7. However, according to the USADA, which administers tests to fighters to check them for steroids, the agency has decided to delay her debut. The reason? Well, Lee has yet to be tested within a six-month period since becoming a UFC fighter, which is standard procedure for fighters that have had prior drug-testing violations.

In 2016, Lee tested positive for diuretics when she was fighting for Invicta. Her history of using banned substances, whether it’s a steroid or not, has to be taken under consideration. If the UFC takes the risk of trusting these fighters to do the right thing, then the organization is just being naive.

The policy that has hindered Lee from appearing at UFC 216 has its benefits. It’s a positive sign that the UFC and the USADA are taking a strong stance against the use of performance-enhancing drugs. With Lee’s history, she has to be viewed as someone who could opt to seek that extra little edge once again. In this six-month period, she’ll have the opportunity to earn back the trust of her employers and the fans.

The downside to this situation for Lee is that she initially thought she was going to fight, but was then denied by the UFC and USADA. One has to wonder why the UFC didn’t know about her past infraction, especially since it was in a prominent organization like Invicta and took place only a year ago. If the organization acted on it earlier, it could have avoided the booking and subsequent scrapping of her fight at UFC 216. Now, Lee has to wait an extra six months, while she gets tested as much as the USADA chooses to test her, so she can prove herself to be drug-free.

Again, while the decision to make her wait six months is the proper call, the way the UFC and the USADA handled it was a little bit sloppy. Maybe we don’t know the full story. Perhaps there’s a legitimate reason as to why it took them a while to make this decision. However, a fighter is trying to perform at their job as much as possible and they train for every fight like it’s their last, so to be denied of that opportunity is a major blow.

Barring some mitigating circumstances, like an injury or suspension, Lee will be able to fight in about six months time. Then, one of the top talents that has yet to fight in the UFC will be looking to prove herself in a new women’s division that will need all of the talent it can get.