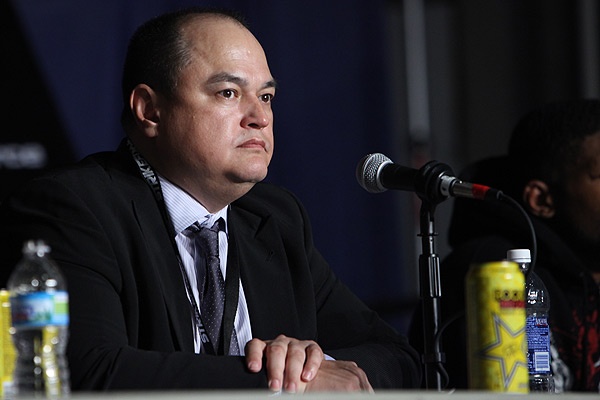 It’s easy to imagine former Strikeforce owner Scott Coker walking into his office as Bellator MMA president for the first time and exclaiming, “Let’s get the band back together!”

There’s plenty of evidence to support that mental image. Bellator matchmaker Sam Caplan is out, replaced by former Strikeforce matchmaker Rich Chou. Bellator’s formerly dead women’s division has been revived, and with a focus on the featherweights, a weight class which saw its best days under the Strikeforce banner. Strikeforce veterans Paul Daley and Melvin Manhoef have inked deals with the promotion. The tournament format has been removed as a priority, with Coker reserving the right to conduct tournaments when there are four “top-tier” contenders in a division. The weekly format of seasons has been traded in for a more traditional monthly event schedule.

The signs certainly point to a Coker nostalgia festival, where Strikeforce returns from the dead with a new banner and a new cage, but a lot of familiar names and faces. However, that doesn’t mean Coker is headed down the wrong path entirely.

Trading in Caplan for Chou is simply part of the regime change. Coker has worked with Chou before, and it makes sense that he’d view Chou as a man who shares his vision for the direction of Bellator. Strikeforce wasn’t able to always deliver in every division all of the time, but it provided fans with a stacked heavyweight tournament that finally served Fedor Emelianenko with some new tough tests, gave Robbie Lawler a home as he quietly matured into a world-class welterweight contender and it became a trailblazer in the realm of women’s MMA, even if it snagged that torch from EliteXC. Chou arrives in Bellator in a time of transition and provides the promotion with a quality matchmaker in Caplan’s departure.

The revival of the women’s featherweight division is a great move for the promotion. Outside of the Invicta FC promotion, which has been dormant while putting together its new broadcast deal, the female featherweights have received very little exposure. Most of the fighters in the weight class, including Cristiane “Cyborg” Justino and Ediane Gomes, are expected to drop down to 135 pounds, and those who do not shed the extra weight are typically exiled to one-off fights in smaller promotions around the world. Bellator has an opportunity to shine with a division that counts Cyborg and Gina Carano as part of its history.

Meanwhile, the signing of fighters like Daley and Manhoef, paired with the releases of the toxic War Machine and Phil Baroni, is a mixed bag. Machine’s release was a wise move by Coker, and Baroni’s support of Machine would only have attracted negative attention for Bellator, so his release could also be justified. Meanwhile, the arrival of Daley and Manhoef injects the potential for highlight-reel knockouts. Coker wants to put the emphasis back on big fights that people will care about, rather than tournaments that didn’t always deliver in the anticipation category, and adding knockout artists is one way to accomplish his goal.

The removal of the tournament format is where things get dicey. Bellator has shifted its focus from building homegrown prospects to promoting cards filled with names that fans recognize. The new strategy will help fill seats and boost ratings, but its bordering on the equivalent of a modern-day pro-wrestling promotion relying on an aging Hulk Hogan, Sting and Kevin Nash to carry its product. Bellator’s tournaments were inconsistent at producing stars, but a scaled back approach that still utilizes up-and-comers would continue to benefit the company. Fighters like Will Brooks and Liam McGeary worked their way through tournaments to knock on the door to promotional stardom. How will the young guns make a dent now, if they have no avenue in which to earn a top spot on the card? Will they be forced to toil in preliminary-card purgatory while Daley and Manhoef get main-card spots and bids in “top-tier” contender tournaments? Balance would be the best option here, but Strikeforce’s history, specifically the lack of promotional pushes for fighters who did well on the company’s Challengers series, suggests that this might be an area where Bellator does struggle as it moves forward.

On the other hand, Bellator’s embrace of the more traditional modern-day matchmaking formula allows it to distance itself from its most awful quality: the weekly event structure. In a landscape where the UFC is putting on one and sometimes two shows per week and AXS TV, NBC Sports and CBS Sports also have offerings regularly, Bellator’s previous product could run even the most dedicated MMA fan ragged. Match-ups suffered due to injuries and short turnaround times between fights, and some cards did little to stir fan interest. Longer intervals between outings will allow Bellator to build stronger lineups and hype those lineups to its fan base.

Is Coker putting the band back together? In many ways, yes. But the building blocks are there to combine Bellator’s best features—its homegrown prospects—with the best of the Strikeforce of MMA past. Coker is wise to bring in talent, be it Strikeforce veterans or female featherweights, that will actually pique the interest of Bellator’s fan base. He’s wise to give fans a more manageable set of Bellator events. He’s wise to make widely applauded moves such as the release of War Machine—and the long-awaited release, on a much more positive note, of company star Eddie Alvarez. But when it comes to the tournament structure, Coker might want to reconsider. Without a mechanism by which to produce new stars, Coker might find that all his wise decisions leave him with nothing in the end but a nostalgic Strikeforce reunion tour.