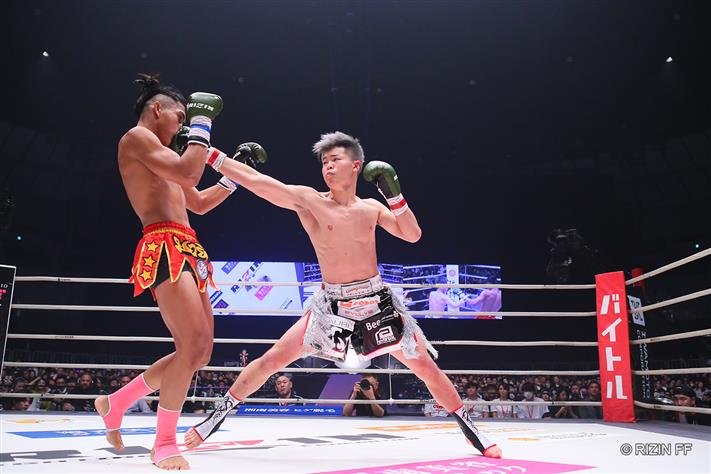 The Rizin Fighting Federation is set to hold Rizin 24 from the famed Saitama Super Arena in Japan. The promotion’s 28th event features a sold-out attendance of just 5,000 people due to government restrictions in place during the midst of the coronavirus (COVID-19) pandemic.

In the night’s headliner, promotional superstar and Japanese combat-sports phenom Tenshin Nasukawa looks to remain undefeated when he takes on former K-1 title challenger Koji “Kouzi” Tanaka. The 22-year-old kickboxing prodigy seeks to add to an already impressive legacy in only his second bout of the year. Meanwhile, Kouzi is set to compete for the first time since leaving K-1 on a three-fight winning streak.

In the co-main event, Rizin bantamweight champion Kai Asakura makes a quick turnaround following his title-winning performance against two-division Shooto titleholder Hiromasa Ougikubo in August. The two-time champ welcomes former lightweight King of Pancrase Shoji Maruyama to the promotion in what is primed to be an all-out brawl.

RIZIN.24 takes place on Sunday, September 27. The card kicks off in the early morning hours for fans in the United States. It can be seen live at 15:30 JST on Sky Perfect PPV in Japan and worldwide on iPPV at 3 a.m. ET.

Even more than usual, this Rizin event puts a heavy spotlight on Tenshin Nasukawa. The young kickboxing phenom is set to meet Kouzi, one of the world’s top 60-kilogram kickboxers. Will this be Nasukawa’s toughest fight yet? How will this bout unfold?

This contest seemed unlikely to come to fruition due to K-1’s unwillingness to share talent and co-promote, the restrictive fighter contracts, Kouzi’s place as a contender atop the K-1 super featherweight division, and the size disparity between these two men. Yet, here we are. It’s come to the surprise of the kickboxing community. The biggest storyline leading into this headliner is Nasukawa’s undefeated streak, which is approaching historic levels.

Kouzi, 31, currently sits at fifth in the Combat Press Kickboxing rankings in a weight class above Nasukawa. The Silver Wolf Gym representative is a former HEAT and ISKA lightweight world champion with 28 wins and 10 knockouts in his 43-fight career. He holds victories over former K-1 champion Hirotaka Urabe, top-10 kickboxer Kotaro Shimano, and experienced veterans Stavros Exakoustidis, Jan Szajko and Tatsuya Oiwa. Kouzi has only lost to former or past top-10 opponents since 2016, with his most notable defeat coming against the current top pound-for-pound kickboxer Takeru. Takeru is the fighter every single kakutogi fan would much rather watch Nasukawa fight, but that’s less likely than achieving world peace due to the massive politics behind the much-anticipated superfight.

Kouzi, due to his incredible toughness and fast-paced pressure, offers an interesting stylistic match-up against the undefeated phenom. Outside of his ability to antagonize his opponents on the microphone, Kouzi will carry a height, reach and weight advantage into this main event. Nasukawa, who has competed most of his career under 57 kilograms, is the naturally smaller fighter. Nasukawa’s management made a smart business decision to force Kouzi to cut down to a 58.5-kilogram catchweight prior to this contest. The move is already paying off, with Kouzi posting on social media about having to cut almost four pounds extra.

Nasukawa’s star aura has continued to manifest as he scores dominant victory after dominant victory. The 22-year-old prodigy has showcased his immense breadth of skill and talent throughout his undefeated 36-fight professional career. The RISE and ISKA world champion has scored 28 knockout victories while defeating a laundry list of champions, top-10 fighters, and high-level opponents. He has never backed down from a challenge throughout his amateur and professional career. He carries an immense amount of experience, with nearly 150 fights in his decade of competition.

Nasukawa has faced fighters with a better skill set and resume than Kouzi. He’s absolutely demolished and dominated almost every single fighter he has ever faced in the kickboxing ring. Kouzi offers a few challenges in this bout, including and most notably his size. However, Nasukawa is the far superior fighter in every aspect of the sport. If Kouzi’s weight cut has diminished his ability to take damage, this could be an easy night of work for Nasukawa. Kouzi hasn’t been stopped in a kickboxing contest since 2011, but his chin was put into question with his recent bout against former MMA prospect Seiya Kawahara last year. Nasukawa will give Kouzi a rude awakening to the promotion when he stops the former K-1 title challenger within two rounds.

Kai Asakura recently became the Rizin bantamweight champion when he scored a soccer-kick knockout of Hiromasa Ougikubo. Does he have anything to fear from veteran Shoji Maruyama in their co-headlining non-title affair?

Maruyama is a grizzled veteran of the Japanese MMA circuit who has competed in Pancrase, Deep and Grachan during his 31-fight career. The 37-year-old spent the majority of his time competing at lightweight in Pancrase and featherweight under the Deep banner. The former lightweight King of Pancrase and Deep title challenger is most notable for his do-or-die style of fighting, his 2007 Pancrase bout against future all-time great José Aldo, and his 2013 “Fight of the Year” contender against Doo Ho Choi, who is now climbing the UFC ladder.

Maruyama’s greatest attributes as a fighter are his unrelenting forward pressure, his gladiator-like toughness, and his ability to throw a variety of strikes ranging from devastating high kicks to brutal soccer kicks. “Samurai” has competed against some of the best Japan has to offer, which will be invaluable experience heading into this dangerous bout with another hard-hitting brawler. Since his transition to the bantamweight division, Maruyama has earned stoppage victories over Kosuke Terashima, Makoto Kamaya and Kensaku Nakamura among his five contests at his new weight.

Asakura continued to showcase his striking prowess, immense power, and limitless potential when he re-captured the bantamweight title against one of the world’s top bantamweights in Ougikubo. The 26-year-old made waves in the sport when he landed one of the biggest upsets in recent memory against elite fighter Kyoji Horiguchi. Asakura stopped Horiguchi’s 13-fight winning streak in just 68 seconds to add to his already incredible resume of knockout victories. The Outsider veteran has finished 12 of his foes, including Manel Kape, Ulka Sasaki and Heili Alateng.

The real question we should be answering here is if Asakura fears anyone. The cerebral brawler will stand toe-to-toe with anyone in the division, which is why this match-up is sure to be wild for as long as it lasts. Maruyama is an experienced veteran with a knack for the knockout himself. However, “Samurai” will be fighting an uphill battle against a fighter who is more athletic, has a massive speed advantage, and who has only been stopped twice in 27 fights. Asakura has nothing to fear in this thrilling bantamweight clash.

Rena Kubota draws Emi Tomimatsu in a 117-pound bout. Will the former Shoot Boxing star continue her winning ways in this one?

The promotion was able to sneak Kubota onto the fight card in the weeks leading up to the event, which is always a huge win for the company’s ratings, especially in its new pay-per-view venture. The promotion couldn’t have picked a better opponent to allow Kubota to showcase her skill set in a short-notice bout that offers both a relatively risk-adverse pairing and a potentially entertaining contest for the fans.

Tomimatsu, who has been around the game for a very long time, will give up size to Kubota in this outing. Despite her willingness to keep it standing, she is overmatched on the feet. The 38-year-old has fought many of the best female fighters in Japan throughout her career, including the likes of Mizuki Inoue, Mei Yamaguchi, Mina Kurobe and Emi Fujino. She offers Kubota an opponent with name value, veteran savvy, and an interesting grappling test. The Brazilian Jiu-Jitsu black belt prefers her hands over her mat work, but she possesses all of the submission tools to pull off the upset.

Kubota’s MMA career has featured massive highs, dark lows, and even thoughts of retirement from combat sports altogether. Her mental state following two losses against Kanna Asakura, a devastating submission defeat from Lindsey VanZandt, and a very public battle with her struggles led to bleak predictions on her return. However, Kubota has since reeled off consecutive wins in the last year, including redemption against VanZandt on New Year’s Eve.

Kubota returns to the ring for the first time with a newfound confidence, more seasoned grappling, and an opportunity to keep the ball rolling into this year’s New Year’s Eve show. Tomimatsu will certainly force Kubota to fight for her victory. However, the four-time Shoot Boxing S-Cup titleholder is used to the spotlight. Expect her to deliver a spectacular contest against a veteran who won’t back down from a fight.