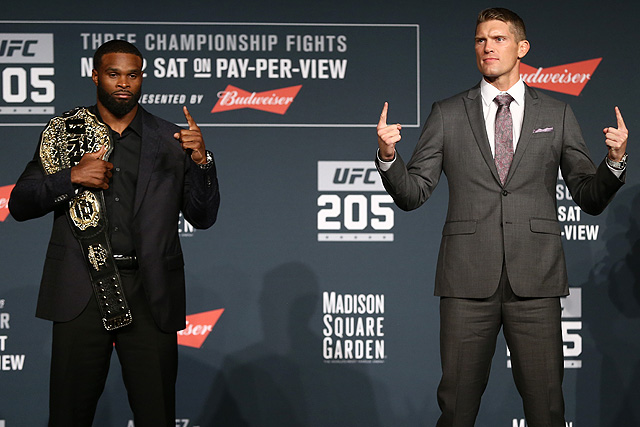 The night’s main event failed to live up to the first meeting between Tyron Woodley and Stephen Thompson, as Woodley retained his title in a narrow decision win. Thompson came forward throughout the first two rounds, backing Woodley against the fence. The pressure prevented Woodley from mounting offense, but Thompson was tentative with his attacks. Woodley earned a takedown in round three, scoring with strikes from top position. The fourth round swung back toward Thompson, as he landed side kicks to the body of Woodley. Woodley was desperate in the final round, coming forward for the first time. Late in the round, Woodley rocked Thompson with punches and flurried hard for the finish. He didn’t find it, but it was enough to convince the judges that he had done enough to claim victory.

Sweden’s David Teymur scored an upset over Lando Vannata in a flashy striking battle. Vannata came out with heavy pressure, but Teymur found his range and countered well with kicks and combinations. The two threw just about every strike in the book, including a Saenchai-style cartwheel kick from Vannata. Teymur landed heavy left hands, but it was his knees to the body that slowed Vannata’s advance. As the fight progressed, Teymur began to mix in takedowns to keep Vannata off balance. Teymur’s consistent attack was enough for all three judges at cageside to give him the decision nod.

Australia’s Daniel Kelly scored the biggest win of his career, spoiling the middleweight debut of former lightweight champion Rashad Evans. Evans was able to score with straight right hands, but Kelly kept coming forward. Kelly repeatedly found a home for his left hand, slowing the offense of Evans. Both fighters tried to take the fight to the ground, but Kelly stuffed the takedown attempts of Evans, while Evans showcased good hips to prevent Kelly from delivering judo throws. Kelly’s relentless forward pressure was the story of the fight, as he simply outworked Evans and eked out a split decision victory.

Making her UFC debut, Cynthia Calvillo put on a grappling clinic against TUF alum Amanda Bobby Cooper. Cooper scored with punches early, but an ill-timed kick allowed Calvillo to take the fight to the ground. Calvillo worked for an anaconda choke, but as Cooper looked to escape, Calvillo took her back. Cooper did her best to defend, but Calvillo got under her chin and flattened her out, forcing Cooper to succumb to the rear-naked choke.

Dutchman Alistair Overeem picked up his second career win over fellow striking stalwart Mark Hunt, earning a third-round knockout. Both fighters fired kicks in the first round, with Overeem frequently landing to the body of the “Super Samoan.” Hunt bled from both his shin and nose as the fight progressed, but he was able to score with elbows from the clinch. Overeem answered with knees, but was wobbled multiple times by the elbows. The final round saw Overeem connect with a left elbow and right knee combination that hurt Hunt. A final knee sent the durable Hunt crashing face-first to the ground unconscious.

The prelims closed with a lackluster affair between Marcin Tybura and Luis Henrique. The majority of the first two rounds was spent in the clinch with Henrique pushing Tybura against the cage. The pair jostled for position, but were frequently separated by referee Herb Dean. Each fighter scored with brief takedowns, but neither mounted much offense. In the final round, Tybura delivered a front kick to the face of the Brazilian and then the fight found the mat. Tybura first took Henrique’s back, then moved to mount. He dropped heavy shots from the mount, prompting Dean to halt the contest.

Darren Elkins scored one of the most memorable comebacks in UFC history, stopping Mirsad Bektic in round three. Bektic scored with combinations and then took Elkins to the ground. From the top position, Bektic dropped a series of elbows that opened a nasty cut over the right eye of Elkins. Blood poured all over the mat as Bektic continued to pound away. The second round was more of the same as Bektic gained top position and continued to score with strikes. Despite the punishment, Elkins kept fighting and as Bektic slowed in the final stanza, Elkins capitalized. He landed a pair of right hands and a head kick that sent Bektic crashing face first to the canvas.

Brazil’s Iuri Alcantara survived a first-round beatdown from opponent Luke Sanders before scoring a comeback kneebar submission. The pair exchanged left hands early. Sanders caught a kick and dumped Alcantara to the mat. Once there, Sanders rained dozens of unanswered left hands. A bloodied Alcantara tied up the left arm of Sanders, so Sanders switched to right hands and elbows. Late in the frame, Sander inexplicably threw a knee to the face of Alcantara while he was grounded. Referee Marc Goddard paused the fight and took a point from Sanders. Sanders again got on top of Alcantara in round two and began delivering more punishment, but Alcantara rolled to a kneebar and coerced the tap.

Heavyweight Mark Godbeer gave newcomer Daniel Spitz a rude welcome to the Octagon, scoring a clear-cut decision win. Godbeer was aggressive with his strikes early, landing powerful right hands. Spitz countered with knees from the clinch and even earned a brief takedown in the middle stanza. Godbeer responded with more power shots, busting up the nose of Spitz. Godbeer dropped Spitz in round three with a right hand, but he couldn’t score the finish. All three judges gave Godbeer all three rounds.

Australia’s Tyson Pedro earned another first-round finish, stopping Paul Craig with elbows in round one. Craig threw his lead-leg head kick over and over to start the fight, but Pedro clinched and took the fight to the fence. From the clinch, Pedro scored with knees. When they separated, Pedro dropped Craig with a right hand. Pedro gained top position on the mat and delivered an onslaught of elbows that forced the referee to intervene.

Bantamweights Albert Morales and Andre Soukhamthath kicked off the night with a back-and-forth affair. Morales controlled the first round by kicking at range. Soukhamthath bounced back in round two by landing with punches and briefly taking the back of Morales. Soukhamthath opened round three with a flurry of body shots, but a failed takedown attempt allowed Morales to take his back and threaten with a rear-naked choke. When the scorecards were read, it was Morales who walked away with the decision win.