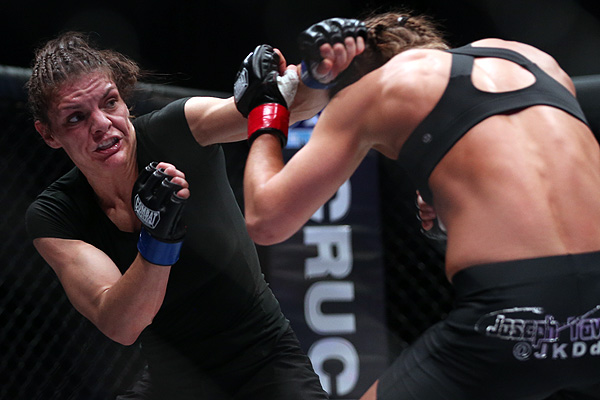 Lauren Murphy has not held back in her call-out of Jessica Eye.

Murphy’s reasons behind the move are worth discussing. Murphy and Eye engaged in a no-holds-barred Twitter war when Eye announced she would be getting a fight soon and she teased her return, targeted for UFC 210 in Buffalo, N.Y., on April 8.

Murphy not only took exception to Eye’s return, but wondered why she’s getting special treatment from the higher-ups. Eye is currently on a four-fight skid, with her most recent fight ending in a decision loss to Bethe Correia at UFC 203 in September. Following the loss, Eye announced she would take a year away from the sport.

“It’s just crazy to me that she’s lost four fights in a row, and her fights haven’t been very good. She was allowed to take a year off and she didn’t even take that year off,” Murphy said in an interview with ChicagoLandSportsRadio.com host and Combat Press writer Mike Pendleton. “Now she’s coming back and she gets a 10-week fight camp, but she doesn’t even have an opponent yet. This is crazy. Why does she get such preferential treatment? What has she done that warrants this kind of treatment?”

The answer to that question, according to Murphy, is nothing. While social media call-outs have become the new wave in MMA, Murphy says this isn’t personal against Eye.

“I don’t think she’s smart enough to be the evil mastermind behind all of this,” said Murphy. “I think she just happens to be somebody’s favorite in the UFC’s staff and they’re giving her a lot of chances that she doesn’t deserve. It’s wildly unfair.”

A veteran in the bantamweight division, Murphy believes she was put on the wrong end of a couple decision losses recently while Eye receives the better treatment.

“If you look at our careers, she’s received so much better treatment than I have,” said Murphy. “She’s also making twice as much money as me and she’s on a four-fight losing streak. What is that all about?”

Eye isn’t the only bantamweight fighter that Murphy believes is getting more than they deserve. Murphy didn’t hold back on her opinions about the aforementioned former title challenger Correia either.

“Everybody I’ve ever spoken to — fighters and media alike — none of them respect her. None of them think she’s very good,” Murphy said. “She is literally probably the most hated person in the UFC.

“She fights like crap. She’s not that good. I was shocked that her and Eye had such an even fight. I think Eye is talented, but not talented enough to warrant the treatment she’s getting. Bethe Correia should’ve never gotten a title shot — that’s a joke.”

What about a possible fight between Murphy and Eye? Well, Murphy says she’s just awaiting the paperwork.

“I’m just waiting on the contract,” she said. “I’ll sign it as soon as they send it.”

As for how she believes she’d fare against Eye, the answer is obvious.

“I’ve improved my mental game, my physical game, my technique. I’m just going to go in there and whoop her ass, and hopefully she’ll whoop mine, too,” said Murphy. “Let’s get a bonus, fuck it. I don’t have seven TKOs on my record for nothing.”

Murphy has exchanged shots with Eye on social media. Now, she’s making it clear that she wants to be the one to welcome Eye back to the Octagon in Buffalo. She’s out to prove she deserves the attention and credit others around her are getting.

Murphy has a few points she’d like to make…

One, she’s better than Jessica Eye.

And, three, you don’t need blonde hair and blue eyes to be successful in the UFC.