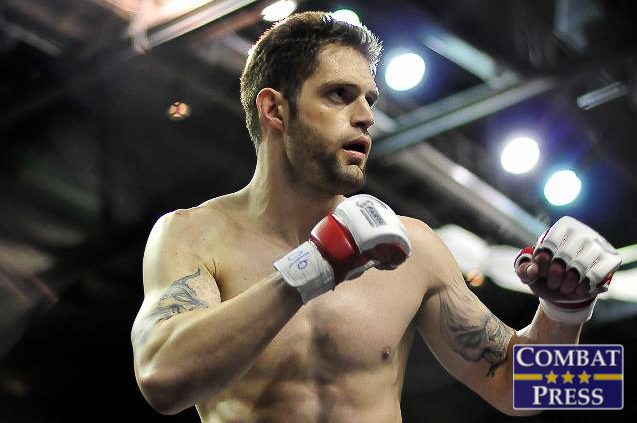 Successful combat athletes can sometimes get stuck in a bit of a conundrum. When in a position of consistent wins, titles come along, the pay gets better and it becomes almost routine to train hard, fight in front of hometown crowds and run through all of the local talent. Early success can lead to a comfortable life. For some fighters out there, however, that comfort zone can start to impede growth.

Other than an appearance on season 19 of The Ultimate Fighter reality show, Adam Stroup has never fought outside of Colorado. He is 10-2 as a pro, stopping eight of his opponents and having never been stopped. The Denver native has had a very impressive start to his career.

While all of his fights were in his home state, Stroup was able to make short work of some national talent. He stopped fellow TUF contestant Frank Lester, current Bellator fighter Justin Guthrie and eight-year veteran Charlie Brown. Even with such impressive wins, he has yet to get an invite from one of the large organizations. Frustration was beginning to set in. What does it take to get a nod?

As with anyone lying in a comfort zone, sometimes a fighter needs to be made uncomfortable to be able to move to the next level. Last August, after riding a fun 13-month run as the Sparta Combat League middleweight champion, Stroup received a big wake-up call. At SCL 43, Stroup faced longtime veteran Cory Devela, one of the top unsigned fighters in the Pacific Northwest. The Washington-based fighter came into Stroup’s backyard, showcased superior wrestling skills and took away a decision win as well as Stroup’s belt.

Anxious to get back in the win column, Stroup immediately took a November fight against the aforementioned Brown at SCL 46. After a tough series of exchanges during the first round and most of the second, the former champ pulled off a triangle choke to finish his opponent near the end of the second.

Back in the win column, but no longer the champ, Stroup started looking at other options. In December, he was approached by one of the top regional promotions, the Resurrection Fighting Alliance, about a spot on the main card of Friday’s RFA 34 event. It was an offer he couldn’t refuse. The loss to Devela was exactly what he needed to advance his career.

“We fought for Sparta for a long time, and I really like Sparta and think it’s a great organization, but we got a good opportunity,” Stroup said. “They told us we would do a three-fight deal, and if we win this one, we’ll get a title shot, so that’s an opportunity we can’t pass up. It’s a bigger show, they have tough guys, and that’s a big step up. We figured if we could their belt, we’ll be well on our way to a big show, you know?”

While RFA 34 is still in Colorado, it is indeed a much bigger stage. The event will be nationally televised on AXS TV, and the UFC and Bellator brass pay attention to the promotion. The RFA has become one of the largest feeder organizations to the big shows.

The RFA may have offered Stroup a fast-track to a title fight, but his first opponent is no cupcake. Standing across the cage will be John Poppie, who trains out of Chosen Few Gym in Wisconsin. Poppie is 6-2 as a pro. His last fight was a loss to middleweight champ Andrew Sanchez at RFA 28 in August. Looking for redemption, Poppie is ready to enter the cage with a vengeance, so Stroup is prepared for an all-out war.

“I think he’s a real tough guy, from the videos I’ve seen,” Stroup admitted. “He can take a lot of punishment and he’s going to be there all the way to the third round. He’s a tough grinder, kind of a wrestler. He’s definitely going to be giving it all he’s got, since he’s coming off a loss. I think this is a big opportunity for him too, to come out to Colorado, to my hometown, and try and beat me in front of my crowd. I think he’s going to bring it for sure.”

Stroup and Poppie have a lot to fight for to gain relevance in the national picture. RFA 34 is the next step, which will make for a very exciting co-main event. The current goal is simple for Stroup. He wants to fight outside of Colorado for the RFA and get on track to dominance in one of the big shows.

“They haven’t said anything about fighting outside of Colorado after this fight, but they have said we’re going to stay busy, so I’ll be ready to go within a short time after that,” said Stroup. “That was one of the main things that makes me excited about the RFA. They go to cool places like Vegas, back east and places I’ve never fought before. I’ve fought almost 20 times here in Colorado. Everybody likes to get out and do something different.”

Everybody may like to do something different, but Stroup isn’t just doing something different. His career advancement relies on fighting outside of the SCL and outside of Colorado. At RFA 34, he has the opportunity to earn bigger pay in bigger shows, and Poppie is the only thing standing between him and his ideal future. It’s only icing on the cake that fight fans across the world will be able to watch the show from the comfort of their homes.

“I’ve never really fought live on TV before, although I did fight that fight on The Ultimate Fighter, which a lot of people ended up seeing,” said Stroup. “But I’ve never fought live, which is going to be cool. I mean, who knows how many thousands of people are going to see it? It definitely adds a whole other realm of excitement to the fight, and I’ll hopefully get a finish in one of the early rounds.”

Stroup is out of his comfort zone and finally ready to take the next step. The SCL has been really good to him, but he is ready to put the local shows in his rearview mirror as he takes on Poppie in Friday night’s co-main event.

Stroup would like to thank all of his coaches and teammates at Factory X, his family, his friends, his fans and his sponsors: 5280 Armory, Front Line Medical and Lakota Roofing. Follow Adam on Twitter: @AdamStroup
Advertisement