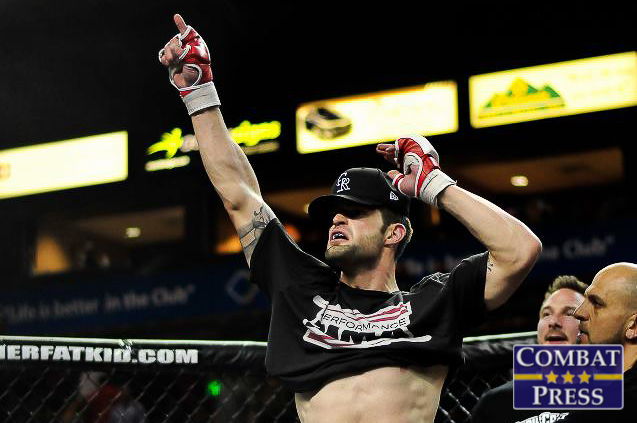 LFA 65’s Adam Stroup: Back on Track and Ready to Throw Down

When Adam Stroup steps inside the Legacy Fighting Alliance cage Friday in Vail, Colo., he’ll be looking to extend his winning streak to four straight. He’s posted such a streak twice before in his professional career, but those wouldn’t nearly be as satisfying as this one. The difference? Well, this one would come after three consecutive defeats, a stretch that led to doubts about where his career was headed. The wins have brought renewed confidence and direction to his career.

“It definitely feels good, because losing three, man, that was heartbreaking,” Stroup told Combat Press. “I really had to look inside and just keep going. I really enjoy the sport. I like to fight. I like training. When you lose three in a row, it’s like, what’s the point? And now we come back and we’ve won three in a row, and it feels good. [I] just want to keep going, and I feel like a couple more wins and we’re right where we need to be.”

Stroup’s three consecutive losses occurred across fights in 2016 and 2017. In 2016, he stood across the cage from John Poppie at Resurrection Fighting Alliance 34 in a co-headlining slot. Stroup’s game plan of standing and banging was neutralized with takedown after takedown from Poppie. Eight months later, at RFA 43, a third-round kneebar by Gabriel Checco left Stroup with another loss in a fight Stroup was clearly winning. Almost a year later, Andrew Kapel sunk in a rear-naked choke and put away Stroup in the first round. Now, Stroup is three wins removed from that skid.

“Some of it is mental,” said Stroup. “But it’s really just learning [from] mistakes I’ve made. First off, I don’t believe I lost the first one with Poppie. I think I won that one. Second one, I won the whole fight and then just got caught with a submission at the end, so that’s bad luck. And then the third loss, I just got a little too greedy and came in too hard and got caught. I don’t think there’s one thing that I’m doing differently; it’s just staying on the path and staying working hard and getting what I believe I deserve.”

Still, for a guy who likes to throw down, Stroup has made slight changes in his approach in the cage. You don’t have to look too hard to see the one big wrinkle he incorporated into his game.

“Last fight I had, he was a really good kickboxer,” said Stroup. “I actually shot a takedown that I’ve never done before and got it. I definitely want to mix it up and broaden my skill set. I do tend to lean a bit on my striking, but I need to get more ways of winning.”

You won’t find many successful takedown attempts on Stroup’s highlight reel. So when one did happen, what was going through the mind of his coaches and the fighters he’s spent time with in the gym?

Wins. Losses. Takedowns — or no takedowns. Stroup has the fuel and desire to compete as long as he so chooses to.

“To win is one of the most rewarding feelings that I’ve ever felt,” he explained. “A lot of people just get up and go to work on Mondays, and Monday through Friday, and that’s their life. Every day feels like [it] adds more excitement, keeps you on your toes. I better be in shape. I better be ready for this fight. [It] just makes life more exciting. I just really enjoy the challenge of fighting. We’re gonna schedule the fight, we’re gonna make the weight, and then me and some other guy are gonna have it out. It’s pretty wild stuff.”

The feeling that comes with stepping in the cage has come less often in the last few years. Early in his career, Stroup was competing up to three times a year. However, the opportunities haven’t been as frequent in the last two years.

“It’s real frustrating,” said Stroup. “I’ve had two fights last year cancel on me. Not because of me or the fighter even. It was due to the promotion. It’s really heartbreaking when I take time off work. I put a lot into this. I put money into this — it cost me money to train. I’m mentally ready, I’m physically ready and then the fight’s canceled. It’s hard. It’s discouraging. In the past, things have gone all to plan and the fights went through and the fighters have showed up. Last year was just bad luck. This year started off good, so just keep it rolling like it is.”

Despite the frustration, Stroup’s career has taken off well past what he had expected.

“When I was a kid, we’d go to parties in high school, and there was always somebody there that needs [to be] taught a lesson,” Stroup recalled. “So I’d usually beat him up or choke him out. Not in a bad way — not like I wanted to do it — they just needed to learn a lesson. And my buddies [suggested I try fighting], and so I did. It took me a while to train and learn the skills to take a fight, but I did it. But my goal, from the very beginning, I just wanted to have one fight — to say I did it — so I can say that I had the balls to get in there and fight, whether I won or lost. And then I won, and that feeling was just crazy. So, I took another fight, and I won that.”

The past is the past. The future might hold a fourth consecutive win for Stroup. It could catapult him to bigger and better things. Stroup will get the chance to pick up the victory near home and make an impression in front of friends, family and the fans viewing at home.

“I would like a finish,” said Stroup. “A submission on a [Brazilian Jiu-Jitsu] black belt would be crazy, so I don’t really know about that, but I want a finish. It’s been a little while since I had a finish, so I want one on Friday.”