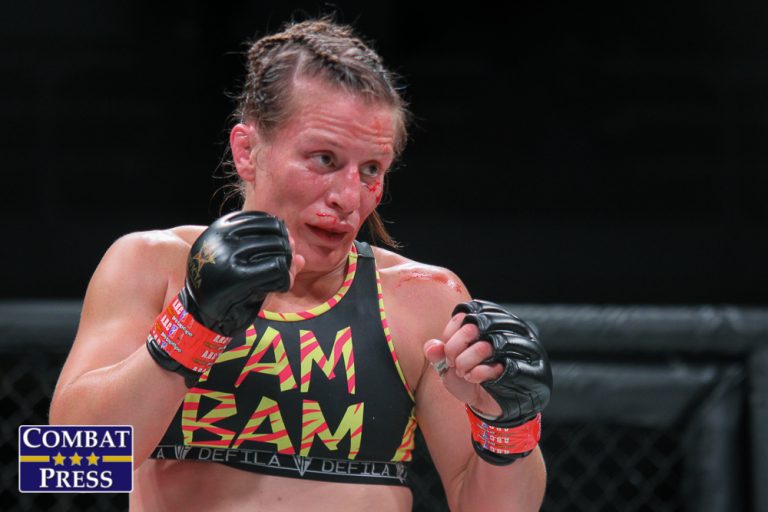 Two women’s MMA fights were highlighted this week. First we had Pam Sorenson against Roberta Samad at Bellator 264. This one went pretty much as we expected as far as what each fighter would look to do. It was a fun fight with Sorenson pulling out the split decision victory. The other bout didn’t happen. Diana Reyes was replaced in her bout with Jennifer Araneda by Adriana Lugo. Arenda needed just over a minute to secure an armbar submission.

The first round started out really well for Sorenson. She was being first with her strikes, landing nice right hands. She also mixed in some jabs. What I really liked was that any time Samad got close, Sorenson hit a low kick. They weren’t super hard or damaging, but started to add up.

Samad, I am not sure if she was looking to counter and not having success, or if she was trying to be first. But Sorenson was beating her to the punch. A couple minutes in, Samad landed one that got the attention of Sorenson and had her backing up a bit. Samad seized the opportunity to get the clinch against the cage. Once she got that, she got her underhooks and although Sorenson did land some knees of her own, Samad did really well in the clinch.

Eventually, Sorenson was able to frame and push off. But from there on, the striking battle changed roles and Samad began to land first. Samad got a confidence boost and began moving forward. The round was close due to how well Sorenson started, but it was a 10-9 round for Samad on my card.

Round two showed what I love about Sorenson. Her fight IQ is elite. She is able to make adjustments mid-fight. In this round she really did well on the feet, both with her strike selection and her movement. She had to get inside because Samad had the reach advantage. Sorenson didn’t recklessly rush in, waiting for opportune moments. She came in with combos, backed off and circled out. Then she would reset and do it again. It made it hard for Samad to control the distance.

As the round wore on, Samad was able to get the clinch again. Sorenson quickly framed and pushed off with no damage done. From there, Sorenson again got the better of the striking until Samad got the clinch again. This time Sorenson couldn’t get her arm up for the frame, so what did she do? She instead used the arm to push down the head of Samad and brought up a beautiful knee to the head. A very clear 10-9 round for Sorenson.

The third round was very interesting. It started out where round two left off, with Sorenson getting in and landing punches. After a minute of that, Samad started landing strikes; her jab looking really good. Samad would have done well to try and land more in terms of combos. She was landing one at a time as compared to two or more from Sorenson.

Samad was finally able to get the fight to the ground and that is where she had her chance to get something done. She did land punches but Sorenson also did so from the bottom. Sorenson had really good defense, using her high guard well and limiting what Samad could really do on offense. Samad also could have been more aggressive or as John McCarthy said on commentary, showed more of a sense of urgency.

With the time running out, Sorenson pushed Samad away with her feet, but could have been done differently. When I am standing and my opponent is trying to push away with her legs and feet, I absolutely love when they leave a leg extended. It gives me two options. I can either grab one and use it to turn their body a bit or I can step to the side and go for side control. To stop me they will have to try and slide over, which is harder with their leg extended. If they want to kick away, they have to bring their legs into their body and then extend. That extra second it takes is all I need.

Sorenson left her legs out there and Samad was able to side step and get side control, but with time running down, there wasn’t time to do much with it. Another very close round that I gave to Sorenson making her the winner on my card 29-28. Two of the three judges agreed.

What is next for Sorenson? I think a fight with Leslie Smith would be fun.

As mentioned, Lugo was a late replacement for Diana Reyes. I have no information as to why Reyes had to pull out.

There isn’t much to say about this fight. Right away it looked almost as if Lugo did not want to be there. Araneda hit her with the first punch and Lugo backed up and covered. She was unaware of how to defend herself and not interested in firing back. Araneda landed some more and took her down. Lugo made no attempt to pull guard. She rolled to her side hoping to not get hit. Araneda got on top of her and her arm was right there to be taken. Araneda got the armbar and Lugo tapped immediately. It was over in just over a minute.

It is really hard to gauge Araneda from this because she had an opponent who was just incredibly outmatched.

What is next for Araneda? I guess they can try and make the Reyes fight happen.