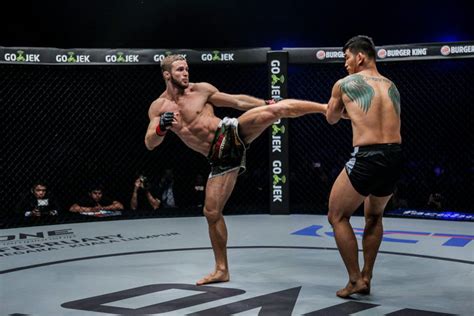 Nsang vs. Bigdash Trilogy at ONE Championship: Full Circle

Both Aung La Nsang and Vitaly Bigdash have tasted ONE Championship middleweight gold before. At ONE Championship: Full Circle on Friday, Feb. 25, they will compete against each other for the third time as they dream of another run at the gold.

The series is deadlocked at 1-1 following two meetings in 2017 that helped elevate “The Burmese Python” to superstardom in his home nation. Both men remain relevant in the middleweight division to this day, and they are eager to close out the rivalry in a big way.

Before the two step back inside the ONE Circle, let’s take a look at each slice of their delicious rivalry so far.

Quest For Power; Jan. 14, 2017
Bigdash had won the ONE middleweight championship one year prior to his first meeting with Aung La Nsang, but their tilt inside the Jakarta Convention Center in Indonesia served as his first title defense.

Perhaps the most notable occurrence of the matchup was Aung La Nsang stepping up to it on short notice. The Myanmar-born athlete replaced Marcio Prachnio two weeks before ONE Championship: Quest For Power, and he took the champion the full five rounds. It was in the championship rounds that Bigdash pulled away.

The first two frames began methodically, with each athlete scoring blows. The Russian then took control thanks to his dominant ground-and-pound. He won out in the end, but Nsang’s admirable performance would earn him another shot at the king just six months later.

Light Of A Nation; Jun. 30, 2017
The Burmese Python had a full training camp, and a nation fully behind him, heading into their second encounter. The rematch was set in Nsang’s home country of Myanmar, and a raucous crowd cheered him on as the defending champion worked hard to send them home unhappy.

From the opening bell, it was clear that it would be a night that all of Myanmar would remember. The country’s sports icon hammered Bigdash early on and found a home for his own ground-and-pound. Nsang’s power was on display in the following rounds, but Bigdash utilized his grappling to score with offense of his own.

Nsang’s full-camp preparation was showcased in the championship rounds this time, and, for the final 10 minutes, he scored the cleaner strikes, while Bigdash had to stifle the onslaught with takedowns.

Following their second war, it was clear which of them had done enough to capture the gold, and an entire country erupted as its hero became their first-ever mixed martial arts champion.

Full Circle; Feb. 25, 2022
It is only right that the epic rivalry will come full circle inside the Singapore Indoor Stadium next Friday. The event is aptly named, as the trilogy bout is five years in the making, and both men are ready to put a bow on the series.

This time, the match will only be a three-round affair. The lack of an additional ten minutes will force the issue with both men as they look to take another step towards reclaiming the gold they once had. And make no mistake about it, that is the goal. A shot at the ONE middleweight championship is very real for both men.

This special rivalry will culminate on Friday, Feb. 25, and be a career achievement for whoever gets their hand raised.

ONE Championship: Full Circle airs live and free, beginning with the lead card on ONE’s Facebook page, YouTube channel, and the ONE Super App at 5 a.m. ET. The main card will follow on YouTube and the B/R App at 7:30 a.m. ET.