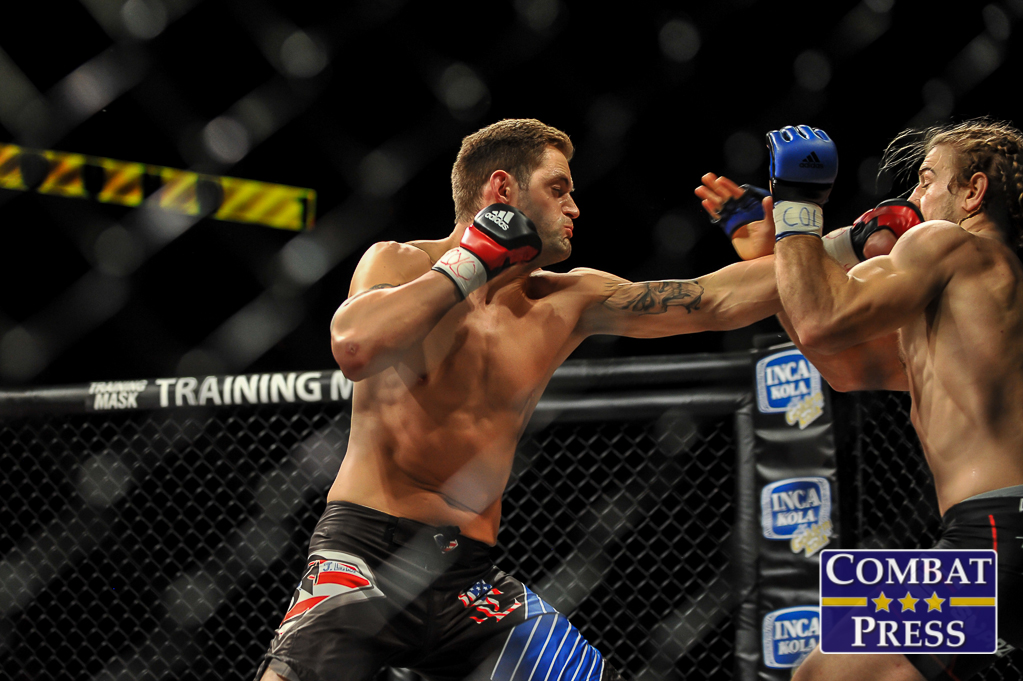 Decisions, decisions. Some people hate making them. Others make them without even thinking about. A person’s decision-making style is such a powerful aspect of their personality that it is one of the four sections of the Myers-Briggs personality test. No matter what decision a person makes or how they make it, decisions are typically final. Everyone needs to learn to live with the consequences of their choices.

Adam Stroup didn’t decide to be born in Denver. His parents made that decision for him. However, he decided to stay close to home and be a family-oriented man for his entire life. That decision led to him finding his path in his hometown, and that eventually led him to a career in mixed martial arts. As a professional athlete, he had the ability to take fights outside of his home state. However, outside of a stint on The Ultimate Fighter reality show, he always had plenty of great opportunities close to home.

Regardless of where those decisions have landed him today, Stroup is always open to the best opportunities. At this point in his career, he’ll go wherever he gets the best chance to advance his career.

“Of course I’m always looking for other options and things like that,” Stroup told Combat Press. “I’ve just had a lot of good opportunities here in Colorado. I’m always looking for other opportunities, but it’s just worked out to fight here. I’d like to fight in other places. I’d like to fight in freaking Japan, or someplace with a nice beach or something.”

Decisions are made on a case-by-case basis. Even in the most disciplined approach to decision-making, there always has to be some wiggle room, otherwise the human race might as well be a bunch of robots. In the Myers-Briggs test, there are two approaches to decision-making. One is “Thinking” and the other is “Feeling.” Thinkers make decisions in an impersonal way through the use of logic. Feelers make decisions based on values and the way decisions affect others. Stroup is definitely a feeler.

The Colorado native last fought in October when he faced Wyoming’s Billy Martin under the Sparta Combat League banner. It wasn’t the sexiest match-up — Martin entered the contest with a losing record — but it was a win Stroup badly needed.

“I felt like it was past due, for sure,” Stroup admitted. “All those fights I lost, I felt like I was winning before I lost them, unfortunately. It always feels good to win, especially a first-round finish, so I just got to keep it rolling.”

Prior to the Martin fight, Stroup had suffered three losses in a row. It was a skid unlike any he had ever felt in his six-year professional career. He had only lost twice previously, and both of those defeats ended on the scorecards. His last two losses were stoppages against guys he should have beaten.

“I think in my past fights, I lost mainly because of decisions I made,” Stroup explained. “It’s not that the guy was even better than me. I always find some relief in that. I don’t think these guys are any better than me. I don’t know if it’s a lack of experience or that I made a bad decision. If these guys were out here beating me up, that would be one thing, but they’re not.”

Stroup’s first of those three defeats came against John Poppie. Poppie clearly had no answer for Stroup’s size and striking advantage, so he used wrestling to hold onto Stroup’s leg for three rounds to get the nod.

Stroup’s next opponent was Brazilian Jiu-Jitsu black belt Gabriel Checco. After Stroup peppered his opponent with strikes, Checco decided to sit and wait in guard until he snagged a kneebar finish in the third frame.

The third loss came to Andrew Kapel, who used a short-range Muay Thai hook under duress to drop Stroup and secure a submission after he was being beaten as well.

In all cases, Stoup solely relied on his feeling-based decision-making to come hard at his opponent with reckless abandon. Now, he has to live with those decisions. However, those decisions have all led to valuable learning experiences, and Stroup has grown as a fighter because of them.

On Saturday night, Sparta Combat League: Testament lands at the Grizzly Rose in Denver. Stroup will be back on the main card, where he faces a much more formidable opponent in Sidiah Parker. Parker trains out of Fit NHB in Albuquerque, N.M., and is on a seven-fight winning streak. Parker can win just about anywhere, too.

“It’s where I need to be,” said the former SCL champ. “I need to be fighting tougher guys, and he’s a tough guy. He’s got a good record, and I believe he’s the King of the Cage champion. It’s a good fight for me.

“I need to just keep winning. There are plenty of guys out there to fight. I’d like to string four finishes together, is what I would like to do. I want to turn around and get another fight in maybe June or July.”

As usual, Stroup has been doing almost all of his training under the tutelage of coach Marc Montoya and BJJ black belt Mario “Busy” Correa at Factory X Muay Thai in Englewood, Colo. He also does his strength and conditioning along with the rest of his teammates — Ian Heinisch, Chris Camozzi, and Dustin Jacoby, to name a few — at Landow Performance.

“Everybody at Factory X goes to Landow’s,” Stroup said. “We ramp up on cardio and also strength train. We do strength on Tuesdays and cardio on Thursdays. Everything is tip-top right now. The body is doing really good.”

Stroup does not overlook any of his opponents. However, he realized in his unfortunate losing streak that he needs to make better choices during his fights. On Saturday night, he will get to test this new outlook against a good opponent who holds a respectable regional title. A win will get him moving back in the direction of the UFC, less than three years after he was on the cusp of entering the promotion.

“It’s always all on the line,” Stroup said. “It’s not like I want it any more or any less. This is my 17th professional fight, and I get better every time. When I turned pro, I didn’t even have that many skills to speak of. As I go along, I feel like I get a little bit better every time. I’m going to make smart decisions.”

Stroup would like to thank all of his coaches and training partners at Factory X and Landow Performance, as well as his family, friends, fans and sponsors: Metro Fire Detection, IVP Volleyball, Harris Chiropractic, Diego Pellicer and Chasta Gear. Follow Stroup on Twitter: @AdamStroup and Instagram: @Adam303
Advertisement