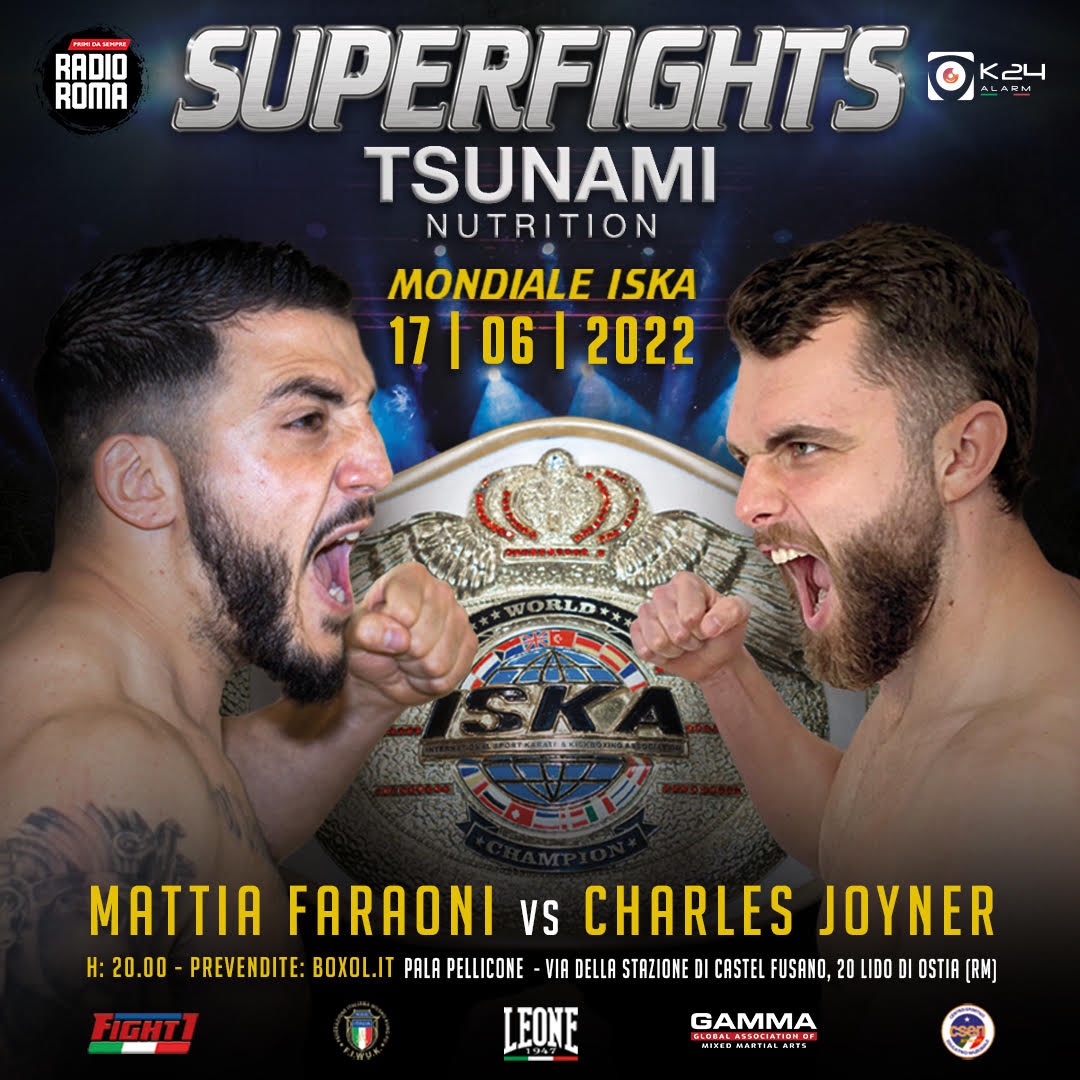 An extraordinary weigh-in ceremony in front of the Colosseum in Rome is the fabulous backdrop of Superfights: Tsunami, the top kickboxing event of the year in Italy. Tonight, in the Italian capital city, fans will see a card headlined by a battle for the vacant ISKA Oriental Rules kickboxing cruiserweight (88.5 kg, 194 lbs.) world title under K-1 rules. Targeting the belt is the local superstar Mattia Faraoni, who is taking on Australia’s Charles Joyner.

Faraoni is a well-rounded fighter and a national pro boxing champion, but he also has spectacular kicking techniques due to his past in Shisenkai Karate. He got the chance to fight for the belt defeating Germany’s Vadim Feger by TKO last April. Faraoni is 30 years old and holds a kickboxing record of 26-4 with 13 knockouts. He is a two-time bronze medalist at the WAKO World Championships and a three-time national champion.

Joyner was selected to face the Italian by the international board of the ISKA to replace the former world champion, Alberto “The Beast” Tapia, who decided to become a full-time pro boxer. The Australian is based out of 4 Corners Gym in Liverpool, Eng. since 2021 to find better opportunities for his career. He’s only 26 years old, but already holds a 15–0 pro record and is a Commonwealth, South Pacific, Oceania and two-time WKF Australian champion, and, on Mar. 26, he won the ISKA Intercontinental belt, his ticket to Rome. The Aussie is a Southpaw and very tall, standing at six-feet-seven-inches, and is eight inches taller than Faraoni. That’s why the Italian did his training camp in Holland, the only country where it was possible to find highly skilled fighters with the same height profile of Joyner.

The Roman fighter is also a social-media rising star in Italy, because of a YouTube show named Quartieri Criminali, which translates to criminal neighborhoods in English. Faraoni hosts the show together with the combat-sports influencer Simone Cicalone. They visit the most depressed areas of the main Italian cities, and talk about life in the suburbs and youth problems with real people from those areas. The success of the program is also due to the way Faraoni manages to get in tune with young people in disadvantaged areas, as well as with TV and movie celebrities, such as Maccio Capatonda and Christian De Sica. Both usually crowd the ringside when he fights, and will at this event as well.

The co-main event will be another ISKA Oriental Rules world title. It will be in the -52 kg female division (114.64 lbs.), which is not vacant. The reigning champion Gloria “The Shadow” Peritore, a Sicilian now based in Rome. She is one of the most successful active female fighters of the country with a record of 20-6-1, and also holds the WKU world title. Peritore, too, is a highly followed athlete on social media, not only for her sports career, but for her initiative, the Shadow Project, an empowerment platform dedicated to all the women that are suffering or have suffered of any kind of violence, physical and psychological.

Peritore’s challenger will be Spain’s Mireia Garcia, who holds a record of 30-6-2, and she is reigning national champion in Spain.

Another very interesting bout will see the return to action for the current WKU -67 kg world champion Jordan Valdinocci, who is 28-5-1 and internationally known also as a striking coach of several MMA fighters, including the UFC’s Alexa Grasso. He will face the heavy hitter Guillermo Obregon from Spain in a classic challenge of technique vs. strength.

Also, former ISKA world champion Hamza Imane who wants to return to the top of the kickboxing world. by defeating Spain’s Jesus Ariza, who is a national champion in his country.

Other high-level bouts include Italy’s Roberto Oliva taking on Spain’s Vicent Garcia. Oliva is with no doubt the most interesting rising star in the Italian kickboxing landscape after his spectacular victory at the previous Superfights event in Rome. He is the current ISKA -57 kg Intercontinental champion, a title won in Tokyo in 2020 during the pandemic.

Today, however, the 21-year-old Oliva has gone up to fight in the 63.5 kg division, so he will have to vacate the Intercontinental title to compete where he aims for the ISKA world title. His next match will be a test match for a future world title if he beats Vicent Garcia.

Also on the card, Italy’s Paolo Cannito will face Quentin Alhamadou. Cannito was one of the biggest surprises at the last Superfights event, when he stopped his opponent under the Muay Thai ruleset, which is not his discipline of origin. Two weeks after that victory, he fought again in his hometown of Altamura, where he won the WKU European title in the -57 kg division. Cannito obviously has world championship ambitions, but he first has a series of opponents to face.

France’s Alhamadou has a solid pro record of 9-1 with two national titles in the -57 kg and -59 kg divisions in France, where kickboxing is a very popular sport with strong athletes. This match will showcase Cannito’s abilities, but Alhamadou is known for the speed of execution with his techniques that has given him the nickname “The Flash”.

Earlier on the card, Ukrainian Taras Hntachuk will take on the Brit Robert Zabitis. Taras was recently signed by FIGHT1 Promotions, the organization that promotes the largest bouts in Italy and will sanction Superfights: Tsunami. Having one both single bouts and tournaments, he holds a record of 17-1-1 with eight knockout victories.

In his country, Hnatchuk has a reputation as a heavy puncher for his knockout victories, which earned him the nickname “Babaiaga”, which means “boogie man” in English. Taras will face the the English champion Roberts Zabitis in his quest to enter the Olympus of the greats.

The second bout on the card features Renato Ferrara and Andrea Storai in an Italian kickboxing classic.
The atmosphere among kickboxing fans in southern Italy has always been considered unparalleled, where these regions love combat sports, such as boxing, which is very popular.

Ferrara has a great resume, earning first place in the 2017 amateur world championships and second place in 2019. Since turning pro, he has gone 18-4-2 with four knockouts. Storai, on the other hand, won his bout at the last Superfights event. He is the son of a former local champion, and carries a record of 18-5-1.

This next challenge will determine the future of the winner at the next Superfights event, according to the Fight1 Promotions rules.