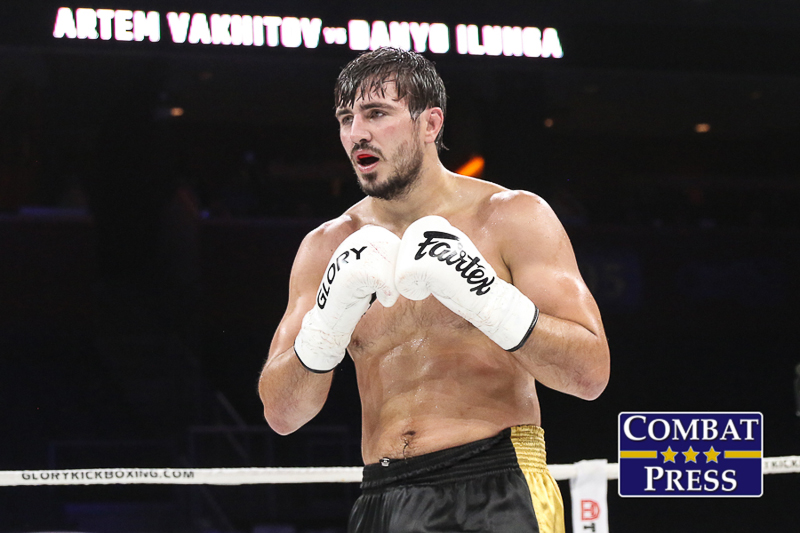 In December, GLORY Kickboxing hosted GLORY 76, its first show since the previous February.

Now, the organization appears determined to make up for lost time. Even before the start of GLORY 76, the company announced its next event for Jan. 30: GLORY 77: Rico vs Jamal.

Heavyweight champion Rico Verhoeven was initially set to defend his title in a fight against Moroccan giant Jamal Ben Saddik. Unfortunately, Ben Saddik dropped out of the fight due to an injury. Verhoeven will instead compete in a four-man tournament, where he will face Hesdy Gerges in one of the semifinal contests. Levi Rigters will take on Tarik Khbabez in the other semifinal.

However, the most anticipated fight of the event is a clash between dominant light-heavyweight champion Artem Vakhitov and challenger Alex Pereira, who won the interim title while Vakhitov was recovering from a hand injury.

Vakhitov agreed to share his thoughts with Combat Press.

It’s nice to see you back in action. How was your recovery?

It is very pleasant to return to work and to the ring in the near future. I missed these feelings, the fights, and the whole atmosphere.

The recovery went well. It took several stages. The operation was performed in Holland by excellent specialists. Then, I underwent a good rehabilitation in Moscow and then in Kemerovo. I went through a lot of recovery procedures. Until now, I have followed all the instructions of a rehabilitation doctor.

You were inactive for a year and a half. What did you do besides recovery?

Yes, the break was quite long. On the one hand, this was good for me. After the injury, there was always not enough time to fully recover. Now, due to the pandemic, everyone was in equal conditions. Everyone was without fights. So, everything went well.

During this period when I was recovering, I also trained daily and kept myself in shape and prepared. I spent time with my family, with relatives and loved ones.

According to Wikipedia, you started karate at the age of 4. How did you come to the gym, and how did you decide to switch to Muay Thai?

Well, Wikipedia cheated a little. I started to practice karate from the age of 6, thanks to my parents. They sent me to the section, as we had a coach we knew there. That was a good training atmosphere: the children came; they were engaged; the discipline was there; they were gaining physical shape.

I studied karate for five years. There were some results. I traveled and competed in various competitions. Then we moved to another district, where my parents found out that there is a good Muay Thai school, and they sent me there. I was 11 years old, and to this day I practice and enjoy this sport.

Which fighters were your childhood idols?

As a child, I dreamed of being Mike Tyson. As I grew, I enjoyed kickboxers Ernesto Frits Hoost, Remy Kenneth Bonjasky, Semmy Schilt, and many more athletes whom I watched. It was interesting for me to watch how they grew and became idols.

In which regions of Russia are Muay Thai and kickboxing actively developing now?

Today, we can say that Muay Thai is developing very rapidly in many regions throughout Russia. This is all noticeable in the results at the competitions, where Kemerovo and Dagestan schools are always in the top three. However, they also compete with teams from Sverdlovsk and Nizhny Novgorod. Several more regions — St. Petersburg, Moscow, and the Moscow Region — are competing confidently and showing good results. Athletes are progressing, competition is growing from this, and it’s good.

It is known that the coronavirus (COVID-19) pandemic’s quarantine hit GLORY hard. The promotion has attracted new investors, though. Is your previous contract still in force, or have you signed a new one?

Many organizations have suffered from the quarantine. The leadership has changed in GLORY, so there have been certain changes, but I think that’s OK. Moreover, the previous tournaments have shown that everything is fine. Now, all are forced to conduct fights without spectators, only broadcasting. My contract is still the same, so all the terms of the contract are respected. In the near future, I will defend the title.

Your GLORY 77 opponent, Alex Pereira, is constantly progressing and is recognized by many as the strongest kickboxer today. What do you see as your main advantage in the upcoming fight?

Yes, of course, Alex is in great shape right now. He is one of the strongest current champions in kickboxing. He runs confidently enough and has beautiful fights, but we have our own plans in this regard, for this fighter. Now, with the coaching staff and my coach Vitaly Viktorovich, we are discussing this with the team. We understand that the fight will be very serious, and many people in the kickboxing world are expecting this fight.

The advantage, of course, is speed. We will work on the movement to deliver combinations. Of course, he has strengths, but he also has weaknesses that we see and will use against him.

You challenged Rico Verhoeven several times before the pandemic. Would you like to fight for the heavyweight title if you beat Pereira?

Yes, I challenged Rico, but now my thoughts are completely different. Now, the main thing is to defend the title. Then, we will see. We will build on this. Then, maybe, there will be other interesting proposals. I think that after the fight it will be more appropriate to make plans for the future.