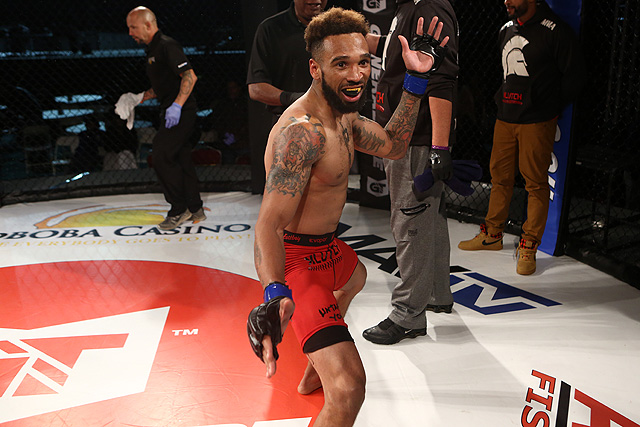 Andre Ewell: Fighting to be a Father

People have different motivations in life, but almost none of them is quite as strong as the emotional bond between parents and children. So, when a parent gets separated from their child, for whatever reason, it creates the best motivations possible. That fight can be a fierce one.

Ewell grew up fighting, whether or not he liked it. Maybe it was his swagger. Maybe it was because he moved around a lot. Perhaps it was even due to the way he looked. Well before his son was born, Andre was fighting.

“I was born in Anaheim [and] moved around a lot — moved to Texas, back to California,” Ewell told Combat Press. “I was always becoming a new face to everybody, so I ended up getting picked on and, back then, it was a race thing. It was really heavy every time I ended up moving. The boys were always finding me, so my pops got me into self-defense. He said I was light and skinny, and I needed to learn how to fight.

“I was just that kid that was always fighting. My mom told me that I needed to do it for real, but I always thought I was too cute for it. It was one of those moments, where I was like, ‘I look good, so I need to stay away from it.’ Everything went in those directions, and I was playing sports. I ended up seeing Roy Jones Jr., which is one of my favorite boxers in the fight game, and that ended up pushing me into boxing.”

Fighting became a passion in Ewell’s life. This time, as had been the case so many times before, he was not about to back down. However, he had more than one fight on his hands.

“I had my son, and I walked away from everything,” Ewell said. “I went into the whole court system, and my son got taken away. I’ve been trying since 2013 to be back in his life. That’s what got me back into fighting. The way the judge looked at me was that I had no value in my life or in me, period. I didn’t like that. Me jumping into MMA is something I knew I was great at. I’m always a true believer in that anything you want to do, number one, you need to know you love it, and you need to put 100 percent into it.”

In the fight game, it’s not unusual to hear a guy say he is doing this for his kids. However, it’s not every day that a guy is literally fighting for his child, both inside the cage and out. Ewell is putting every ounce of effort into this fight.

“They let me spend no time with him,” Ewell stated. “My case is upside down and backwards. I’m getting clued in on the situation, and they know that, and it’s starting to turn in a different direction. Everything’s floating in the upright at the moment. I’m putting in a really good fight for it.”

With such a huge and important distraction outside of the cage, how can Ewell even find the time to focus on his career as a professional fighter? Well, a quick peek at his record will alleviate any concerns there. The 30-year-old Californian is 13-4 as a pro after just three years of competition. He has finished almost everyone he’s faced, too. His most recent win came at CES 50 in June when he tapped out Dinis Paiva at 36 seconds of the third round to earn the promotion’s vacant bantamweight title. The win over Paiva put Ewell’s current winning streak at four.

“I want the UFC card that’s right in my backyard — [Los Angeles] at the Staples Center,” Ewell said. “It’s one of the biggest bantamweight cards of the year, and that’s what I want to jump on. If they’re not ready for me, I’d be happy to get on the Contender Series or go overseas. I want to fight anybody who is a tough challenge. If they say they’re the best in their state or their country, I want to take that person on and prove I’m the best.”

Ewell’s motivations are clear. His efforts to get time with his son have also put his mentality in a very good place. Not only does he want his son to be able to look up to him, but he also wants to be a role model to others. He believes people should not just look up to role models, but they should take it a step further and strive to be better.

“I bring excitement,” Ewell explained. “I bring love. I bring something to be cherished. I am that centerpiece of change in life. I’m bringing up struggle, hard work, dedication and someone who appreciates what they’re doing.

“It’s something you bring to the table with a smile. You should care about someone that wants to bring happiness and change to somebody else. If you come to me and talk to me, for example, everybody has the attitude like, ‘I want to be just like that.’ But, in reality, that mentality is that you should want to be better than that person. Like me, I have my boyhood idols, sure — Mike Tyson, Muhammad Ali, Bruce Lee, you know? — but I have a mindset of being better. I want to be better than them.”

Ewell’s aspirations to become a role model may have been strengthened by his struggle to be a part of his son’s life, but they were already developing when he was a child. He wasn’t on the jock or the gang side of the fence. He very much lived his own life.

“The good thing is that I was always in sports — football, basketball and track,” Ewell said. “I was always around the gangs, but sports kept me busy. There was something different about me. I grew up with them, but when they went right [and] I went left. And when they went left, I went right.”

After Ewell started boxing, he also began dabbling in wrestling and taekwondo. He was starting to build a well-rounded fighting base even before he was a fighter. He has gone on to win fights in every way possible — on the ground, on the feet and on the judges’ scorecards. He has proven he can take the fight anywhere it goes, even in the courtroom.

“I’m long, I’m strong, I’m fast, I’m quick and I’ve got really good game,” Ewell said. “It comes down to the moment where people think I’m underrated at something, but I’m actually solid and great at it. I work hard on everything I need to do. If you stay standing, it’s downhill from there. If we go to the ground, you know, I have underrated [jiu-jitsu], and people don’t know that I’m actually good there. At times, I know I don’t always shoot, but that’s because I want to bang up top. I also have good wrestling. Ain’t no wrong opponent for me. I’m honestly the best, so anybody and everybody can get it. I feel like I’m the wrong opponent for everybody.”

Regardless of what challenge is up next for Ewell, there’s just one driving force behind his actions.

“It’s my son,” Ewell said. “Anyone who knows anything about me knows that I’m doing this for my son. I literally went bankrupt just trying to fight to be in my son’s life. I had a hard year of not being in the fight and working to be in his life. Everything I had and was making was going straight to my son, but it’s my son. It got to that moment that I had to do something that I honestly love, and my son’s going to grow up watching that and seeing that not only am I great at it, but it’s all for him.”

UFC 227 is two weeks away in Los Angeles, the city where Ewell resides. There are eight bantamweight fighters on the card. If one of them happens to fall out, Ewell is ready and willing to get his crack at the big show. It would be his chance to show the world how hard he is willing to fight for his son. It’s a fight he will never give up on.

Ewell would like to thank his son, his family, his mom, his managers at KO Reps, his coaches and teammates at Apex MMA and Team Impact, and all of his sponsors: Bad Boys, Terphouse, Sobs, Fighting Addiction, Lynn Trucking, Versaclimber, Smart Stop Self Storage, Dynasty, Brandon’s Diner, IDM, Riverside Royalty, Untamed Youth and 100% Violence. Follow Andre on Twitter: @daii24_dre and Instagram: @Daii42
Advertisement