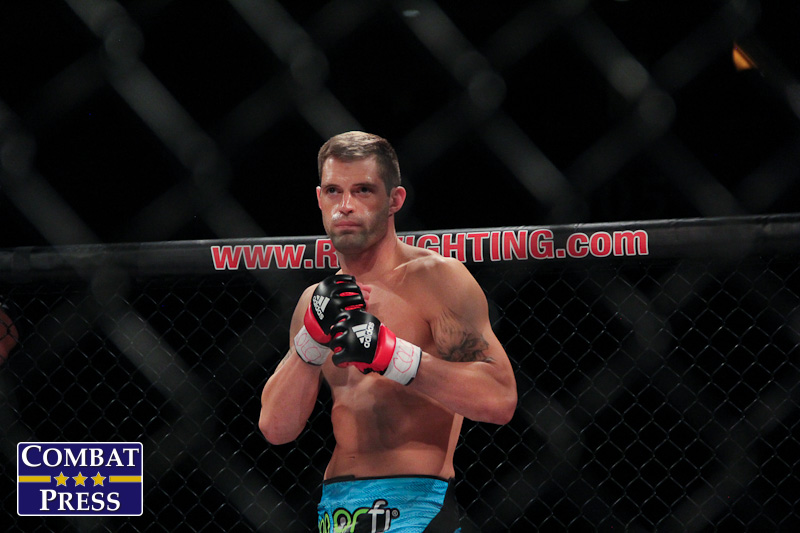 SCL 60’s Adam Stroup: ‘A Fight That Everyone Wants To See’

It’s no secret that the sport of mixed martial arts comes with a certain perception of glamour and flair. However, things are not always exactly as they seem. It only takes one hiccup or two for people to quickly forget a fighter.

In reality, fighters live pretty normal lives. They usually carry a “real job” of some sort, and they have bills to pay and normal issues to deal with just like everyone else.

Colorado-based fighter Adam Stroup is just a normal guy who works a typical day job for Metro Fire Detection in the Denver area. He is very tight with family and friends, and he takes care of his 100-year-old grandfather. Stroup’s not living some glamorous lifestyle. He’s just working really hard to stake his claim in MMA, while still taking care of the day-to-day.

Stroup had a fairly meteoric rise in his first few years as a pro fighter. In his first 10 fights, he went 9-1, with his only loss coming by a very questionable decision in his second pro fight. After an exhibition loss to Dhiego Lima during his bid to enter the house for The Ultimate Fighter 19, he got right back into action by capturing and twice defending the Sparta Combat League middleweight title. Stroup was at the top of his game. He was on the UFC’s radar and was waiting for his next big shot. Then came Strikeforce veteran Cory Devela.

At SCL 43, Devela took Stroup’s belt after going the distance. The former champ came back with a win a couple months later, but returned in 2016 with back-to-back losses in the Resurrection Fighting Alliance. The first was to John Poppie, who outwrestled Stroup at RFA 34. The next was a submission loss to Brazilian Jiu-Jitsu black belt Gabriel Checco at RFA 43 in September. In one year, Stroup went from 9-1 as a pro to 1-3 in his last four fights. The last one really stung, because Stroup bloodied Checco for almost the entire fight before getting caught in a kneebar.

“You know, I was in really good shape and I was ready for the fight,” Stroup told Combat Press. “Unfortunately, I knew he was going to go for those heel hooks and kneebars. I knew he was kind of a one-trick pony. I was able to fight him off for most of the fight, and he got me in the last minute and a half with his one trick. It was really frustrating, really disheartening.

Stroup was in a tough spot. He had lost to two grapplers in a row. Training at Factory X Muay Thai under the tutelage of Marc Montoya, he got right back to work. Near the beginning of the year, however, he was hoping to get another fight before suffering an undisclosed injury, which sidelined him for another few months.

In late May, Stroup found out he would be back in action at SCL 60, which takes place this weekend at the Colorado Convention Center in downtown Denver. He will face Andrew Kapel, who trains out of the Minnesota Martial Arts Academy. In addition to a 10-6 record in MMA, Kapel also has an extensive background in Muay Thai at both the amateur and pro levels.

“For this fight, I’m not fighting a jiu-jitsu black belt, which I think plays into my strength, which is fighting on the feet,” Stroup explained. “So, this time, I’m just working on some combos and sharpening up my tools [and] getting ready to go.

“We’re always mixing stuff up a little bit at Factory X. We have a new jiu-jitsu coach. His name is [Mario] ‘Busy’ [Correia]. I work with Ian [Heinisch] on my wrestling, of course. James Krause is in town, so he’s always showing some cool stuff. More than anything, I just keep getting better. I don’t feel like I’m off by much. I just need a little level-up in a couple areas.”

Stroup fully understands what he is up against. He is not taking Kapel lightly, as he knows that Kapel is more than just a kickboxer, but an overall well-rounded mixed martial artist. He also knows that his own back is against the wall. He needs to win at all costs. After that, he would like to get right back to action, stringing together a few wins, so those back-to-back losses become a distant memory.

“I’m hoping to get a couple fights together with Sparta Combat League,” Stroup said. “They’re a growing organization that, here in a couple years, will be right up with all of the big regional shows. They’re getting some big TV deals, and they’ve always been progressing since I started fighting with them several years ago. They just keep getting better with every show, and I’m excited for that.

“Right now, I just really want to get a win on the record, because I have two losses in a row. That’s really hard for me to swallow, because I work way too hard and have put way too much time into this to lose two fights in a row. I’m just really ready to get into the cage tonight or tomorrow or whenever. I just want to fight as soon as possible, and I want to take care of business.”

Once within striking distance of a UFC contract, Stroup is now in rebuilding mode. He is hungrier than ever. When it comes to Saturday night’s showdown, there is no “if” he wins. In his mind, it’s “when.” His 10 months on the sidelines has given him a new perspective. He can worry about glamour and flair some other time. For now, it’s all business.

Stroup would like to thank his coaches and training partners at Factory X and Landow Performance, as well as his family, friends, fans and sponsors: Metro Fire Detection, Diego Pellicer, IVP Volleyball, and Chasta Gear. Follow Adam on Twitter: @AdamStroup
Advertisement