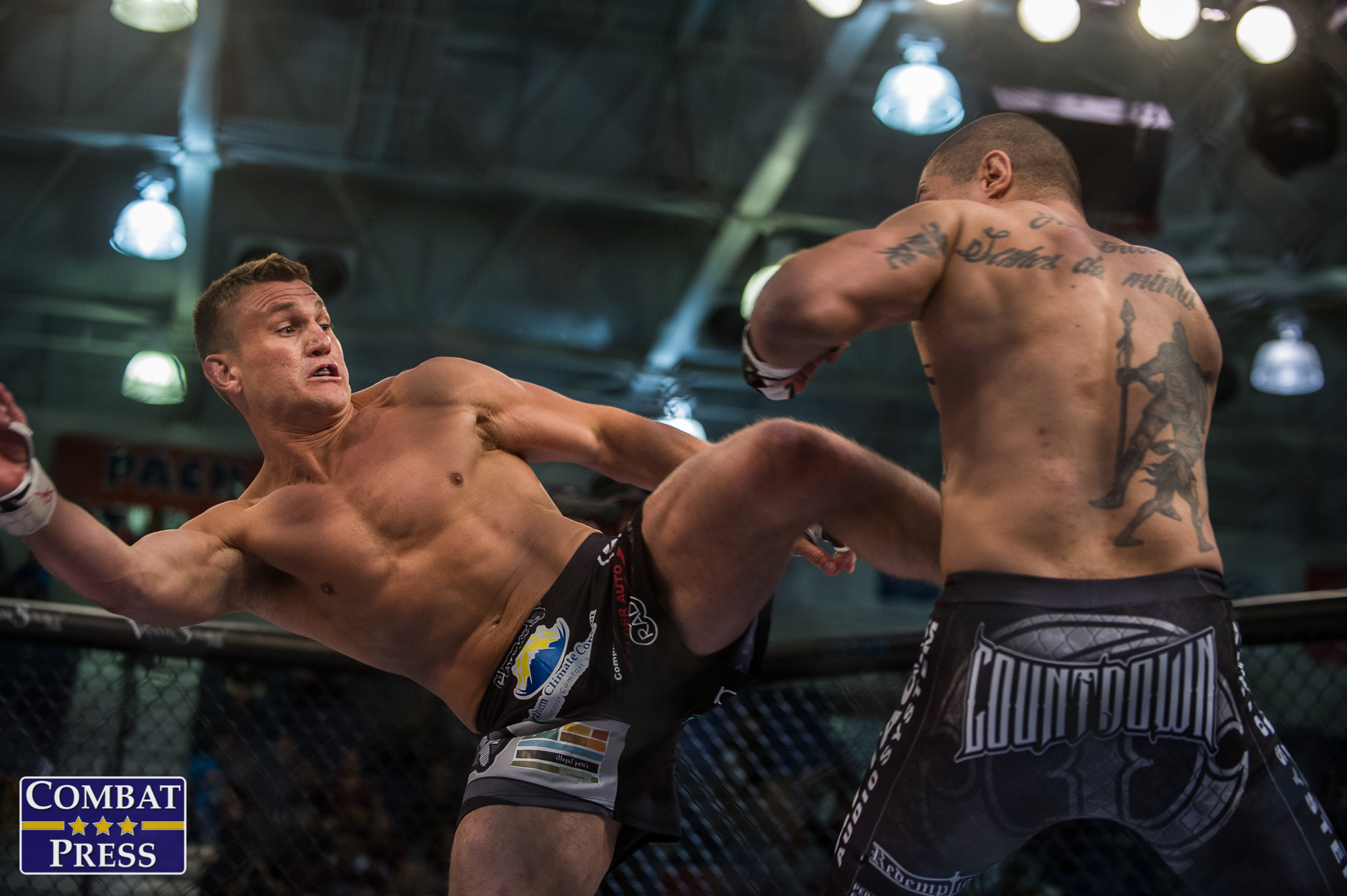 It is in the spirit of a warrior to travel around gathering the best tools and knowledge to improve one’s skills. When a warrior stays in one place for too long, their spirit and drive can become stagnant.

Throughout time, there have been thousands, if not millions, of warriors who were eventually beaten because they got too complacent and comfortable with their training and never put in the effort to shake things up.

UFC middleweight Ian “Hurricane” Heinisch started to feel that he was getting too complacent as 2019 drew to a close. He was 1-2 on the year after dropping decisions to Derek Brunson and Omari Akhmedov. So, early in 2020, he, along with training partner and UFC veteran Nate Marquardt, made a trip out to Thailand. They eventually landed at Tiger Muay Thai & MMA.

Heinisch and his wife Joni were planning on making it a permanent move when the coronavirus (COVID-19) pandemic hit. So, instead, he came back to the Denver area, where he began training under Jake Ramos at Genesis Training Academy and Peter Straub of Easton Training Center and the Elevation Fight Team. When things started to open back up in late Spring, the Colorado native was already feeling a refreshing boost to his game.

On June 6, Heinisch was back in the Octagon at UFC 250. He scored a first-round TKO of veteran Gerald Meerschaert in just 74 seconds. After finishing seven of his 12 opponents prior to joining the UFC roster, it was his first finish as a UFC middleweight.

“It was just ‘The Hurricane 2.0,’ man,” Heinisch told Combat Press. “I’ve been working real hard. I haven’t been as active as I usually am. I switched around teams. I got back to my basics, my roots, my love of the sport, my passion, and I just perfectly executed it. I didn’t even get to use much of my new tools that I’ve learned, so I’m excited to get back in there.”

Prior to 2020, Heinisch had been with the same team for his entire career. He still loves many of the people that helped shape him to that point, but, as many others have discovered throughout history, change is good.

“I just feel new training partners, different looks, different coaches, and more private training has helped me a lot,” Heinisch said. “I just feel like it’s in my warrior spirit to travel around and train with the best guys in the world, all over the world. I just felt like I was getting comfortable and getting used to the routine, and it was becoming something that wasn’t me.

“I like to be on the road. I like to be going around, and I was just kind of not doing that. [My old team] was so great to get me where I got, and I’ve got nothing but great things to say about those guys. I wish them the best. But, for me, at that time, I needed to make a move, and I truly feel like it was the right thing to do.”

Heinisch’s desire to travel the world has actually gotten him in a lot of trouble in the past, but that past, while it shaped who he is today, is behind him. Since becoming a pro fighter, he has only been able to travel outside the country once, and that was to fight.

Heinisch’s next bout is scheduled for Saturday night, when he takes on Brendan Allen on the main card of UFC on ESPN+ 40. Allen, just like the 15th-ranked Heinisch, is a former Legacy Fighting Alliance middleweight champion and a high-level grappler. Heinsich was a state wrestling standout when he was growing up, and Allen is a black belt in Brazilian Jiu-Jitsu. Allen trains out of Roufusport in Milwaukee. For this camp, Heinisch, who still has Ramos and Straub as his primary coaches, made a trip out to Las Vegas and Xtreme Couture

“I was in Vegas for about six weeks,” said Heinisch. “I’m back [in Colorado] finishing up camp, getting some high-altitude training, getting dialed in with Coach Jake and Coach Peter.”

Marquardt, Ramos, and Eric Nicksick of Xtreme Couture will be in Heinisch’s corner this weekend. While Marquardt also had to come back to the United States due to the pandemic, he spent some time training in Texas before joining Heinisch in Las Vegas. Both men still plan to travel back to Thailand once things improve.

Heinisch had been scheduled to meet Allen in the past. The two were supposed to fight in June, but Heinisch had to withdraw with a knee injury. Allen ended up facing Kyle Daukaus instead, and he won by decision. He wanted to fight Allen in mid-October, but it didn’t work out. Allen had some healing to do after the Daukaus fight, which pushed a bout with Heinisch all the way into early November. This ended up leaving time for a 10-week camp for Heinisch, which makes it one of the longest of his career.

“This is my time,” Heinisch said. “I’m on this mission. I’ve taken my lessons. I’ve grown. It’s time for [Allen] to take some lessons. Someday, I think he’ll be ready. Maybe, he’ll get into the top 15, but right now is not his time.

Heinisch is hoping for a big win and a quick turnaround before he celebrates the holidays and can hopefully move to Thailand early next year. He was originally eyeing a bout with rising phenom Khamzat Chimaev, but the Russian has been pitted against England’s Leon Edwards in a fight set for December. There is always a possibility that Edwards is forced to pull out and Heinisch could fill in, but there is no time for what-ifs. Heinisch has a more pressing matter at hand with Allen, against whom he is ready to showcase both his new and old skills.

“I’m more comfortable in the UFC cage,” Heinisch admitted. “I’m more patient. I’ve learned so much. Like, dropping Brunson with a kick and then rushing in, getting that adrenaline dump, and letting the crowd affect my emotions — there were so many lessons there. I’ll ultimately be more comfortable there, dialing in on basics with my mechanics and my punching and just my movement. That’s what Coach Jake is all about — movement — and he’s really helped with my movement in the cage. Every guy I’ve ever fought in there is top 20. I’ve never really fought a guy who wasn’t. I think Meerschaert was the first.”

The best thing that could have happened to Heinisch in this crazy year was his decision to get up and start moving around. It has helped his mentality and improved his game tenfold. However, he and his wife had recently bought a house too, so one has to wonder what happened to their new abode.

“We have renters in our house with a year lease, so we’re kind of being nomads on the road,” Heinisch explained. “We had an AirBnb house out in Vegas, and out here, we’re living in an RV.

“It was a customer of my wife’s family. Their family had a huge 30-foot RV, so they gave us this great price to just rent it out. We were thinking about buying it, but with us going to Thailand, that just didn’t make sense.”

Heinisch isn’t exactly “living in a van down by the river,” Matt Foley-style, but dare to dream. He and his wife have no issues living a nomadic lifestyle. It’s actually the plan for the foreseeable future, including after his upcoming fight this weekend.

“I think we’re going to stay out in Vegas,” Heinisch said. “We have a Mexico trip planned right after that. We’ll probably come back and get an AirBnb, rent out a house for a few months in Vegas, and go back and forth between Vegas and Colorado, keep training, and hopefully get another fight. If not, we’ll be on our way to Thailand in January.”

Heinisch has a warrior’s mentality and a penchant for travel. The combination of these two aspects of his personality has made him undefeated thus far in 2020. On Saturday, he has a big test against Allen, who is currently undefeated in his three-fight UFC career and is on a seven-fight winning streak overall with finishes against five of those opponents. Heinisch is going to go with the flow, keep his eyes on the prize, and go where the wind takes him as he strives to be a UFC middleweight champion one day.

“This is what I was born to do, buddy,” Heinisch said. “This is the only option right now.”