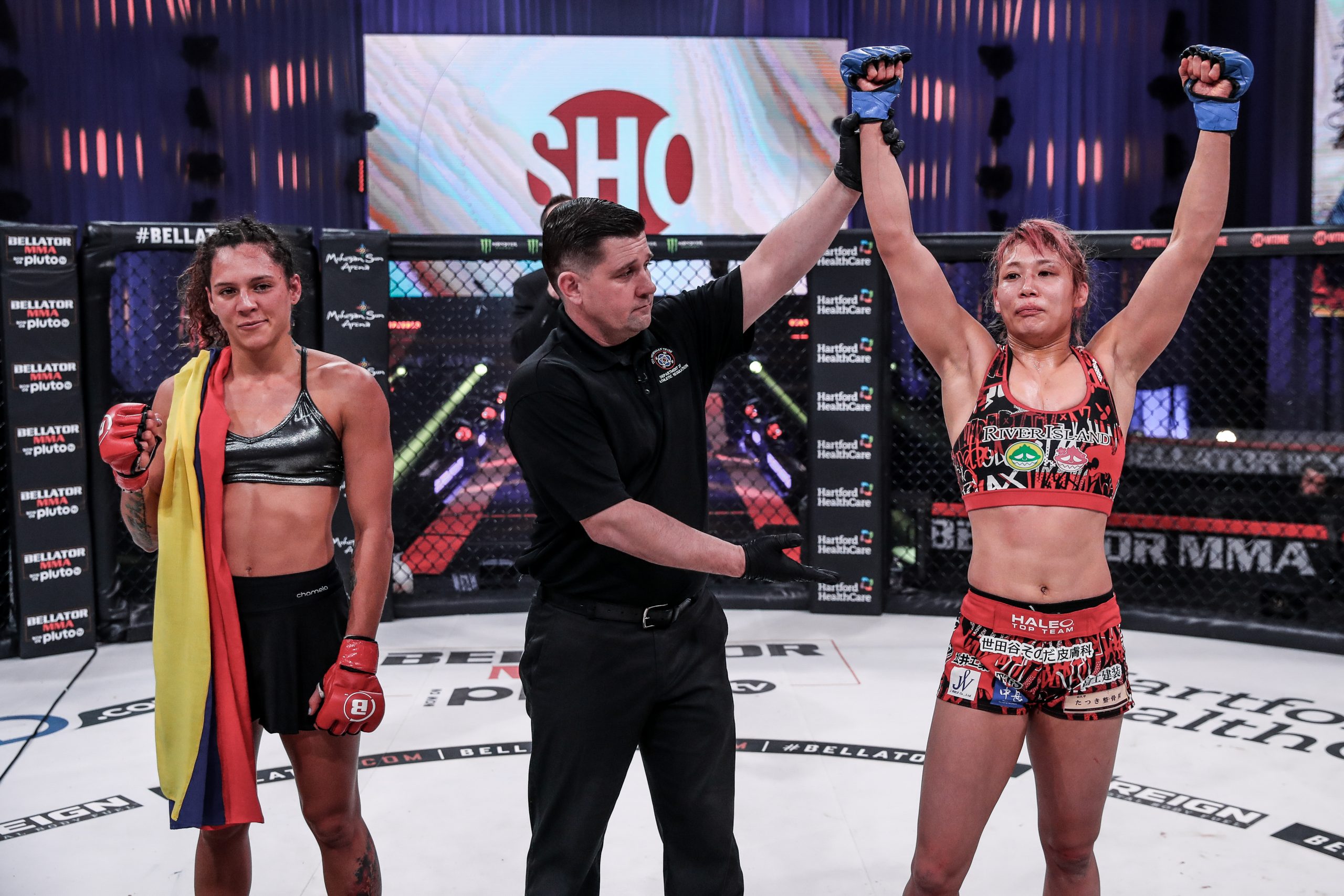 Well, this week’s review will be short and to the point.

I am unaware of the circumstances behind the cancellation, but the bout between Brooke Mayo and Akeela Al-Hameed did not take place. So, this leaves just one fight to look at, but it was a great one between Kana Watanabe and Alejandra Lara at Bellator 255.

Watanabe defeated Lara via split decision in a fight that was really what I expected it to be, both in terms of excitement and how it played out. We knew Watanabe would want to be on the ground, although Lara isn’t terrible there, and we knew that Lara would want it on the feet, although Watanabe isn’t terrible there. We got to see the reasons why each fighter wanted it in a certain place, too.

In the first frame, Lara got the better of the striking. What I really liked was the second punch of her combos. The first one landed at times, but the second one always had a lot behind it and landed with accuracy. Watanabe was really not keeping her hands up, which is a problem she has had in the past and that hurt her here. There almost appeared to be a look of frustration on Watanabe’s face. The judoka did get it to the ground, but she was very overly anxious in looking to improve her position. Lara was able to use that and escape the early bad position, even taking the back of Watanabe at one point. It was a very clear round for Lara.

I was interested in what Watanabe was going to do in round two. Her takedowns are best when coming from the clinch, but Lara’s striking was going to make it hard for Watanabe to get in there. However, Watanabe did get the takedown — a beautiful one where she got in close, locked the body, and got a trip. She had eaten a lot of punches beforehand, but this was her being able to get exactly what she wanted.

I wrote about this on Twitter during the fight. Seconds later, we saw what I was talking about. Watanabe was so intent on passing that she was doing things like elevating her hips, which allowed Lara to sweep and end up on top herself. Had Watanabe instead accepted the half guard and been more offensive, she could have really done a number on Lara.

Late in the second round, Watanabe made a beautiful escape, showing great flexibility and landing back on top. She ended the round there with some great ground-and-pound.

The third frame was really pretty basic, and I say that in a good way. Watanabe knew where she was going to win the fight, so she got in close and scored the trip takedown. This time, she was smart too. Lara got the half guard. Instead of fighting it and using all her energy on trying to pass to a more dominant position, Watanabe accepted the half guard and landed strikes.

While Watanabe said afterward that she was nervous hearing the scores, I tend to believe she knew it was 1-1 heading into the final round and that she just had to win the round. Now, that doesn’t mean she had to give up on trying to finish, but she smartly worked with what she was given and coasted through the round.

Two of the three judges sided with Watanabe, as did I. However, it came down to how you scored the second round. Overall, it was a great fight, though. Watanabe got a big win on a big stage, and Lara showed why some people are high on her as well, both with her great striking and a couple times when she got out of bad positions on the ground.

What’s next for Watanabe? I wouldn’t mind seeing her against the winner of this coming weekend’s clash between Liz Carmouche and Vanessa Porto. However, if Carmouche wins, then she might be next in line for a title shot.