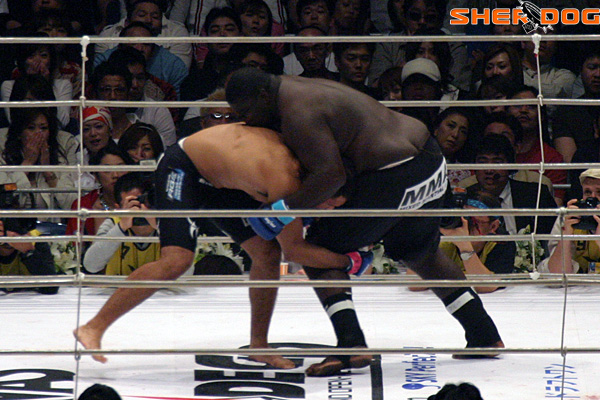 Over the course of this multi-part series, we will take a look back at the greatest upsets, comebacks and victories of Brazilian legend Antonio Rodrigo Nogueira’s 16-year MMA career. In part six, we looked at the Brazilian’s journey through the 2004 Pride Heavyweight Grand Prix bracket. Nogueira had one more Pride tournament, the 2006 Pride Openweight Grand Prix, in store. We look at his performance in the 2006 tourney and his move to the UFC in part seven of this series.

A berth in the 2006 Pride Openweight Grand Prix set up Nogueira against Zuluzinho in the opening round. It took just over two minutes for Nogueira to lock up Zuluzinho’s right arm in an armbar from mount, sending the Brazilian into the quarterfinals to meet Fabricio Werdum. Nogueira captured the decision win over the future UFC heavyweight champion.

King of Pancrase Josh Barnett was the next man to face Nogueira. In a bout that went to a split decision, Barnett put Nogueira into submission trouble on multiple occasions despite Nogueira having positional control. Barnett claimed the win, upsetting the Brazilian and becoming only the third man to defeat the legend in his career.

The two men would fight again at Pride Shockwave 2006 in another exciting back-and-forth affair. Barnett controlled the striking early, but resorted to a monstrous slam to get the fight to the mat. Nogueira swept Barnett, getting on top and grinding down his opponent to finish out the round.

The second round featured heavy exchanges between the fighters. Barnett got the better of the shots, landing heavy hooks to the body and moving out of the way of Nogueira’s punches. A bloodied and battered Barnett started to breathe heavier, opening up the fight for Nogueira. The Brazilian landed a solid knee to Barnett’s chin, followed by a series of hooks and another big knee to the body that hurt him. The momentum of the fight had turned. Nogueira went on to win the 20-minute contest by edging Barnett in the striking exchanges and the wrestling battle. Despite an incredibly tight guillotine attempt from Barnett in the third round, Nogueira proved he was still one of the best heavyweights in the world.

Nogueira made his debut against a familiar foe when he fought Heath Herring for the third time at UFC 73. The first round was all Nogueira until Herring landed a heavy left high kick while Nogueira leaned in, dropping the Brazilian late in the round. Herring was criticized for not pressing Nogueira for the finish and instead relying on the referee to stand the fight back to the feet. Nogueira slowly worked his way back into the fight, taking over the stand-up and getting important takedowns and control when the fight hit the mat.

Nogueira defeated Herring on the scorecards to post a successful debut and set up an interim heavyweight title shot at UFC 81. It would be the start of the last leg in Nogueira’s career. Nogueira was a fixture of the UFC’s heavyweight division from his 2007 arrival until his 2015 retirement. In the final installment of this career retrospective, we’ll look at Nogueira’s eight-year UFC tenure.