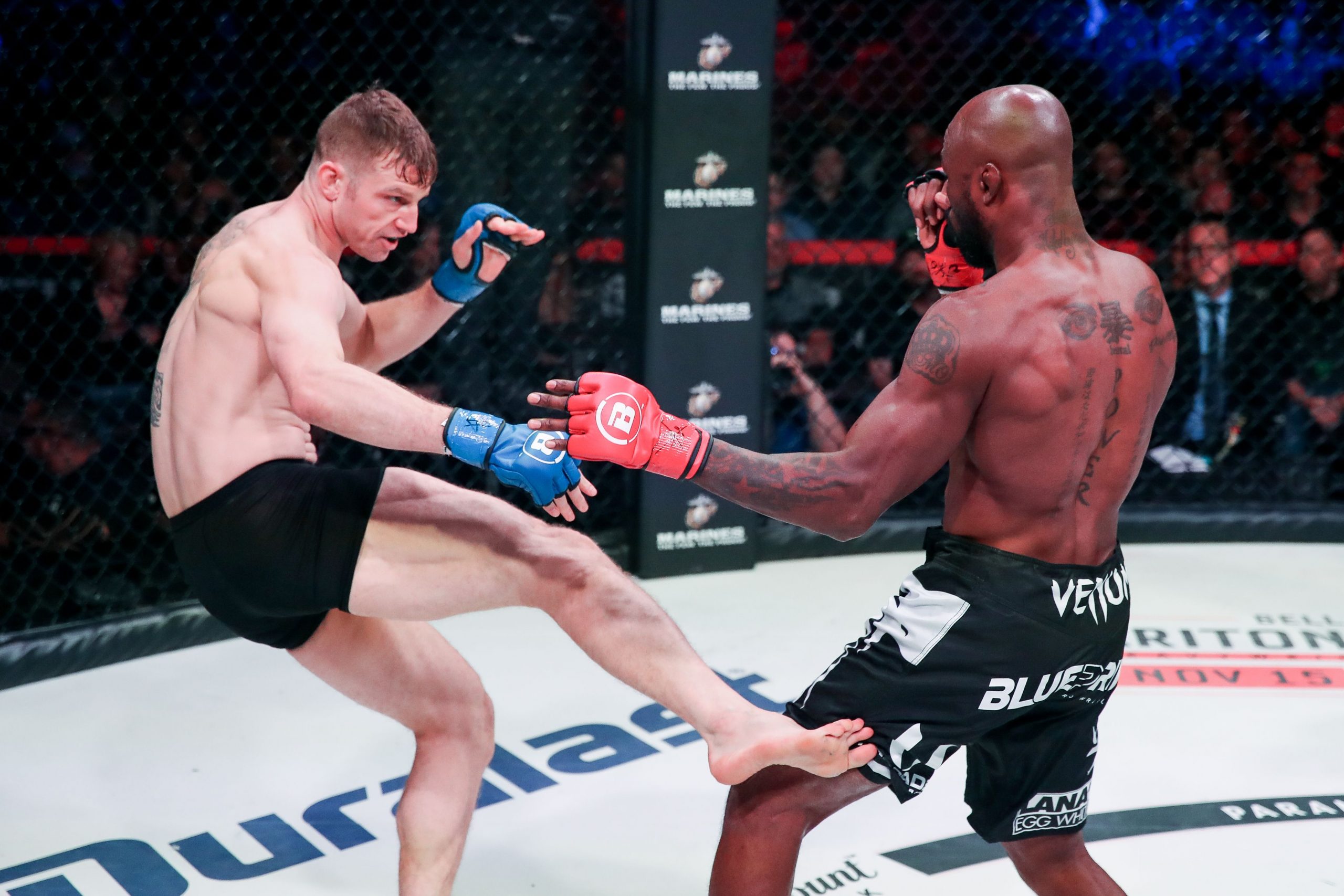 One minute, he was ripping body punches, before coming hard up high. The next minute, the lights went dark. One career ended that night. The other picked up a turbo boost.

In November, at Bellator 233, the legendary Muhammed “King Mo” Lawal entered the cage for the last time in his professional MMA career when he faced promotional newcomer Andrew Kapel. Kapel had been hungry as hell for a fight — any fight. King Mo, a former Strikeforce light-heavyweight champion and previous winner of Bellator and Rizin tournaments, was on a three-fight skid for the first time in his career.

From the beginning of the fight, Kapel pressed the action. However, Lawal kept coming in with those fast low-to-high combos. Then, just 75 seconds into the first round, everything changed. Lawal caught a kick from Kapel, who simultaneously threw a laser right hand that landed on Lawal’s chin. The punch sent the longtime Bellator standout to the canvas. King Mo was completely out.

“I definitely expected it to be a lot more difficult, but sometimes that’s how fights go,” Kapel told Combat Press. “You don’t plan for that. You don’t go out there and say, ‘I’m going to knock him out immediately.’ That’s stupid. I expected it to be a grind. I expected him to take me down and punish me for a while, but I knew I wasn’t going to give up. He was going to have to kill me to get me out of there. That was my one shot. I knew where he was at with his career a lot more than he knew where I was at with my career.

“It was vindication. It was only one minute of a fight or whatever, but it was decades of work — 15 years on the mat and on the feet and traveling, going through hardships and losses and wins, you know. It just culminated in that moment. It was also just the beginning of something. It was like, OK, now I’m finally here. It felt overdue.”

Kapel has a wife and now two kids — a four-year-old son and a seven-month-old daughter. He and his family lived in a rented apartment, and he worked at a bar to make ends meet. It was not the ideal situation. The Lawal fight gave him a decent paycheck for once in his career, and he knocked out a legend, too. It instantly put his name on the map and the Bellator middleweight division on notice.

“I finally got to where I wanted to be, and we’re just getting started,” Kapel said. “I actually had some fights fall through [since then]. First, a guy got sick in December and then the other one was the COVID stuff. I was supposed to have one in May.

“My clock’s ticking. If I wasn’t going to fight this year, I would’ve been like, ‘OK, what’s the next career to do?’ I figured it would happen whenever Bellator got it together to start making moves, because I knew the UFC was moving, and [Bellator] didn’t want to be left in the dust.”

Even though gyms were shut down for a couple months in Colorado, where Kapel trains with Denver’s Elevation Fight Team, many of the guys found creative ways to train. They knew the world wasn’t going to be shut down forever.

“We had to change things up,” said the former kickboxer. “We had a small group that would meet up pretty regularly to train a few days a week. We’d do strength and conditioning out in a park somewhere. I had a running route I’d do, and a hill nearby I’d hit. You just stay disciplined, and you make your own schedule up. You just don’t fall off. You study tape, and there’s a lot you can do. It’s an opportunity, not a setback. It’s just a mentality thing.”

Bellator finally did get moving, beginning with Bellator 242 on July 24. Two weeks ago, the company put on its second show since resuming its schedule. On Friday night, the organization will be back in action yet again with Bellator 244 set for the Mohegan Sun Arena in Uncasville, Conn. Bellator is wasting no time sending Kapel up the ladder. He faces UFC and Strikeforce veteran John Salter, who has only lost once since joining Bellator in early 2015.

That sole loss for Salter came against future champion Rafael Lovato Jr., who still remains undefeated. After tapping out Dustin Jacoby in the second round of his Bellator debut, all of Salter’s wins were first-round finishes until he went the distance against his most recent opponent, Costello van Steenis. Kapel, on the other hand, has only lost once in the last five years. All but one of his seven wins in that period of time were first-round finishes.

“I have massive respect for Salter,” Kapel admitted. “I think he’s criminally underrated. They should be promoting him. They should have been promoting him four fights ago. You don’t put together a 7-1 win streak in Bellator easily.

“Honestly, I think it’s not smart for him to take this fight. I think he should wait, because I think they shafted him putting [Gegard] Mousasi against [Douglas] Lima, in my opinion. He’s only lost to the champ that left. I don’t think it’s an intelligent political move, but he’s probably hungry and hasn’t fought for a while. He’s got a gym to run. He looks at me as an easy win, and he thinks my win is a fluke. That’s probably why he’s taking it.”

Salter lost to Lovato two years ago, but he has now won back-to-back fights. In June 2019, Lovato picked up the win over Mousasi to earn the middleweight strap, but he then had to vacate the belt due to a rare brain condition. Mousasi went on to beat Lyoto Machida. Meanwhile, Lima is on a three-fight winning streak and now holds the welterweight title. Lima was supposed to fight Mousasi for the vacant middleweight belt in May, but the contest was scrapped.

“It’s not really a bad position for me,” Kapel said. “If I lose to Salter, I [lose] to the best middleweight they’ve got, besides Mousasi. I’m definitely not going into it with that mentality, but, politically, it’s intelligent and shouldn’t set me back too far. That’s not my mentality. I’m going in there to show that I belong at the very top of the division. I think a win over him will do it for me.

“I’m still quite a dark horse. There’s not much footage to watch on me. He can look at my record and see I’ve lost by [submission] quite a bit in the past and expect to do the same thing he’s done to a lot of his other opponents to me. He’s going to be in for a rude awakening.”

Kapel has also had an awakening. With the coronavirus pandemic wreaking havoc on the normal daily routine of most people, Kapel included, he’s had a lot of time to reflect on his life and career.

“I feel like I got reborn,” explained Kapel. “I feel like I had a huge spiritual awakening through all this stuff. All the things made sense. My life finally clicked. A lot of my personal history clicked. I forgave a lot of key people in my life. I opened myself up and let go of any fear and apprehension I had about anything in the future. I feel like everything’s perfect. It was a powerful moment that tied up a lot of loose ends I had about my life.

“Words fail us, so we find other ways to express ourselves. Artists paint. A musician composes. And martial artists fight. That’s my expression of it. You just get to see that little bit when we’re in the cage, but that’s a culmination of not only the fight camp, but of all the years before that — all the teachers that have taught you and all of the experiences you’ve had. It all comes to the foreground.”

The Kapel family moved to Colorado almost three years ago, because Kapel wanted to train with the Elevation Fight Team. It was a huge leap of faith that eventually paid off for him when he beat Lawal and solidified his footing with Bellator. However, he only expects a few more years out of his career. Then, he plans to move on to the next stage of life. However, he does have one main goal he would like to achieve before he hangs it up.

“I want to make enough money to buy a really modest dwelling for my little family,” Kapel said. “That would be a really nice thing to get a foothold in. Maybe like a tiny duplex, so I could rent one side out. That’s something that would give me a little bit of stability for my family.”

Kapel’s story is a great one. From past struggles to a glorious win, it’s an inspirational tale. On Friday night, in a bout that airs live on the Paramount Network and DAZN, the middleweight talent will look to showcase his skills once again as he attempts to climb the ladder and earn an eventual title shot.

“Just look at my stats,” Kapel said. “I either finish the dude or I get finished. Only once have I gone to decision. It’s exciting if people like to watch fights that finish. To be honest, I don’t really care what people think. I’m brought in to fight the best in the world, [which is] what I believe I am, and that’s where I belong.”