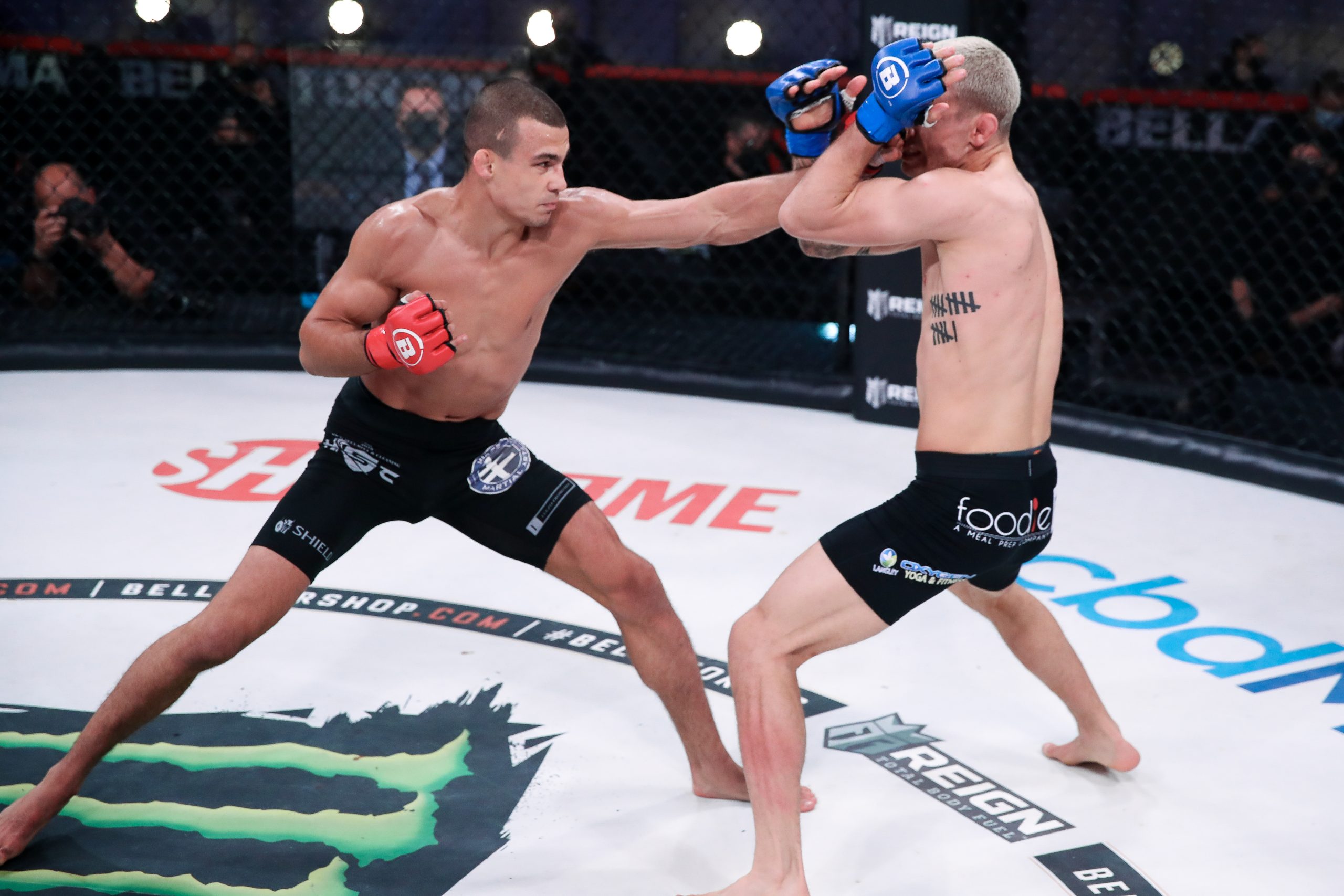 On Saturday, Mar. 12, Bellator hits the road to put on a show in St.Louis, Mo. Bellator 276: Borics vs. Burnell currently features 12 fights, with four on the Showtime main card. As Bellator continues to build homegrown talent, their events are getting more intriguing. With 2022 off to a great start, this might be the year Bellator goes to the next level.

The main event at Bellator 276 displays two of the promotion’s top featherweights. The high-flying Ádám Borics looks to score the biggest win of his career against the tactical and strategical Mads Burnell. With both fighters holding solid win streaks, the winner could find themselves fighting for the title sooner than later.

In the co-main event, light heavyweight contenders Phil Davis and Julius Anglickas continue their journey back to a title shot. Anglickas needs Mr.Wonderful on his resume, but Davis continues to put together wins. With a win over Davis, Anglickas could potentially have his breakout moment.

Other Bellator 276 fights to watch include Johnny Eblen vs. John Salter, Jay Jay Wilson vs. Gadzhi Rabadanov, and Derek Anderson vs. Goiti Yamauchi.

The preliminary card airs live on Bellator’s YouTube channel starting at 6 p.m. ET, with the main card following on Showtime at 9 p.m. ET. Check out the full Bellator 276 preview and predictions below.

Ádám Borics is riding a three fight winning streak since his first career loss; does he make it four in a row by defeating Mads Burnell?

As AJ McKee prepares for a rematch with Patricio “Pitbull” Freire, the next challenger in line will be either Borics or Burnell. Borics is an explosive fighter that can finish the fight at any moment. With eleven finishes on his pro record, Borics has evolved into a durable fighter that breaks down his opponents with relentless pressure. This matchup is the perfect test to see if Borics is ready to fight for the title.

Since joining Bellator at the end of 2020, Burnell has won all three of his fights to prove he is one of the best fighters in the division. Burnell is an intelligent fighter that rarely makes mistakes. His ability to mix up his striking and grappling has led many opponents to frustrating losses. At 28 years old, Burnell is ready to take out the top prospect and fight for the title by the end of 2022.

The possibility of Borics is landing a crazy finish is always there, but Burnell tends to stay out of threatening positions. Meanwhile, Burnell’s ability to figure his opponents out and use their weaknesses against them could be the key. With that said, Borics has only lost once and gained a lot of experience with his last three fights going to decision. Borics should come out slower and use his athletic advantages to pick up a tough decision win over Burnell.

Phil Davis and Julius Anglickas were both bounced from the light heavyweight grand prix by champion Vadim Nemkov; which man emerges with a win in this contest?

No disrespect to the fighters, but Davis vs. Anglickas could end up being a somewhat lackluster matchup. After an impressive UFC career, Davis moved to Bellator and continued to win. During his last six fights, Davis picked up some impressive wins but seemed to be slowing down physically. With that said, Davis has the experience and tools to beat Anglickas and work back to one last shot against Vadim Nemkov.

Anglickas is a powerful fighter who hasn’t had his breakout moment yet. After winning on Dana White’s Contender Series, Anglickas signed with Bellator and won all three of his first fights. Unfortunately, Anglickas lost a short-notice title fight against Nemkov, his first loss since 2016. Anglickas has solid striking, but his success mainly comes from his high-level grappling abilities. Anglickas looks to have his breakout moment with a win against the former Bellator Light Heavyweight Champion.

Both fighters tend to take a slower approach to limit risk. This matchup could end up being boring if both fighters try to fight off the counter. If the fight goes to the ground, Anglickas could find success by racking up control time. If the fight stays standing, Davis’s experience and distance control could lead to tons of damage for Anglickas. Overall, Anglickas will most likely close the distance and dominate to a decision win.

Eblen is the latest addition of wrestlers turned savage by American Top Team. Since turning pro in 2017, Eblen has won all ten of his fights with six finishes. Holding a 6-0 Bellator record, Eblen gets a step-up in competition. Salter joined Bellator in 2015 and holds a promotional record of 8-2 with his only losses against Gegard Mousasi and Rafael Lovato Jr. Salter has experience against upcoming prospects and looks to pull off the upset by giving Eblen his first loss.

The problem for Salter is that Eblen’s weaknesses have not been exposed yet. Eblen was an NCAA Division 1 wrestler and fell in love with his hands over this career thus far. Salter has 10 submission wins over his career, but grappling with Eblen could be a fatal mistake. Although Salter could pull off a sneaky submission, Eblen should be able to score a KO early or grind out a decision win.