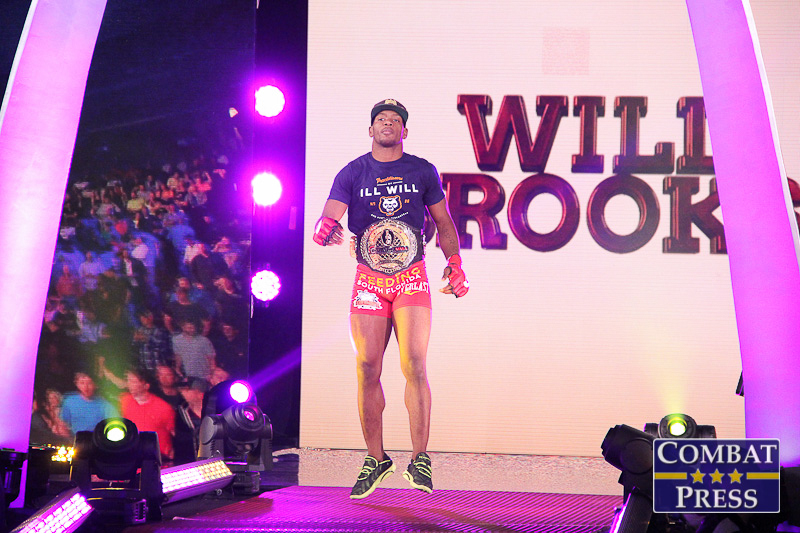 Just Business: Bellator MMA Had To Let Will Brooks Leave

With the departure of Will Brooks, Bellator has continued a trend of letting its star homegrown talent leave for other pastures. That trend has been coupled with Bellator’s recent tendency to go out and bring in marquee free agents that, perhaps, haven’t lived up to lofty expectations.

Brooks isn’t the first to leave Bellator and get a bigger deal through free agency. Welterweight Ben Askren was the pioneer. Askren had been the most dominant champion in Bellator history before departing the promotion for ONE FC. Current UFC lightweight title contender Eddie Alvarez was another champion who largely came up in Bellator. He departed the promotion after a series of entertaining fights with Michael Chandler that boosted both the fighters and the promotion to new levels of fan interest.

Bellator has replaced these fighters with some high-profile free agents, including lightweight/welterweight Benson Henderson, heavyweight Matt Mitrione and lightweight Josh Thomson. Sure, these are significant signings, but it could be a bad sign for Bellator to continuously let its big names walk. These are rising stars that grew up in the promotion, but now they’re headed elsewhere in exchange for big-money free agents whose best days might just be in the rear-view mirror.

However, it’s not all bad. Sure, Bellator has occasionally lost homegrown talent like Alvarez, Askren or Brooks, but the company has kept other household names. Chandler remains. The Pitbull brothers, Eduardo Dantas and Daniel Straus are but a few of the other remaining names on the long list of homegrown talent on Bellator’s roster.

Bellator is the No. 2 promotion on the continent, but any fighter who hits the top echelon of the No. 2 promotion will want to test his or her meddle in the No. 1 promotion — in this case, the UFC. It’s what every great fighter ends up doing. Not many stay in the small pond if they’re good enough. There’s bigger and brighter competition abroad and there’s a lot of prestige in just being a member of the UFC roster. Askren is the only notable name that left Bellator and didn’t go to the UFC.

The homegrown fighters who stay in Bellator only benefit from having the free agents come over. It creates a better atmosphere and more headlines for cards that used to get only a little attention, mostly from those who watch MMA religiously. Now, Bellator draws in fans across the spectrum who tune in to watch a name like Quinton “Rampage” Jackson fight on a card and then stick around to see the likes of Goiti Yamauchi, Brennan Ward or Daniel Weichel. The free agents in turn raise the profile of other fighters on the card and help brew a better base for growing talent in the promotion.

Bellator has a tough task in retaining fighters who have always dreamt of competing inside the UFC’s Octagon. That requires the company to get big names to raise viewership and possibly, one day, be on level footing with the UFC (no matter how much of a pipe dream and a slim chance that seems).