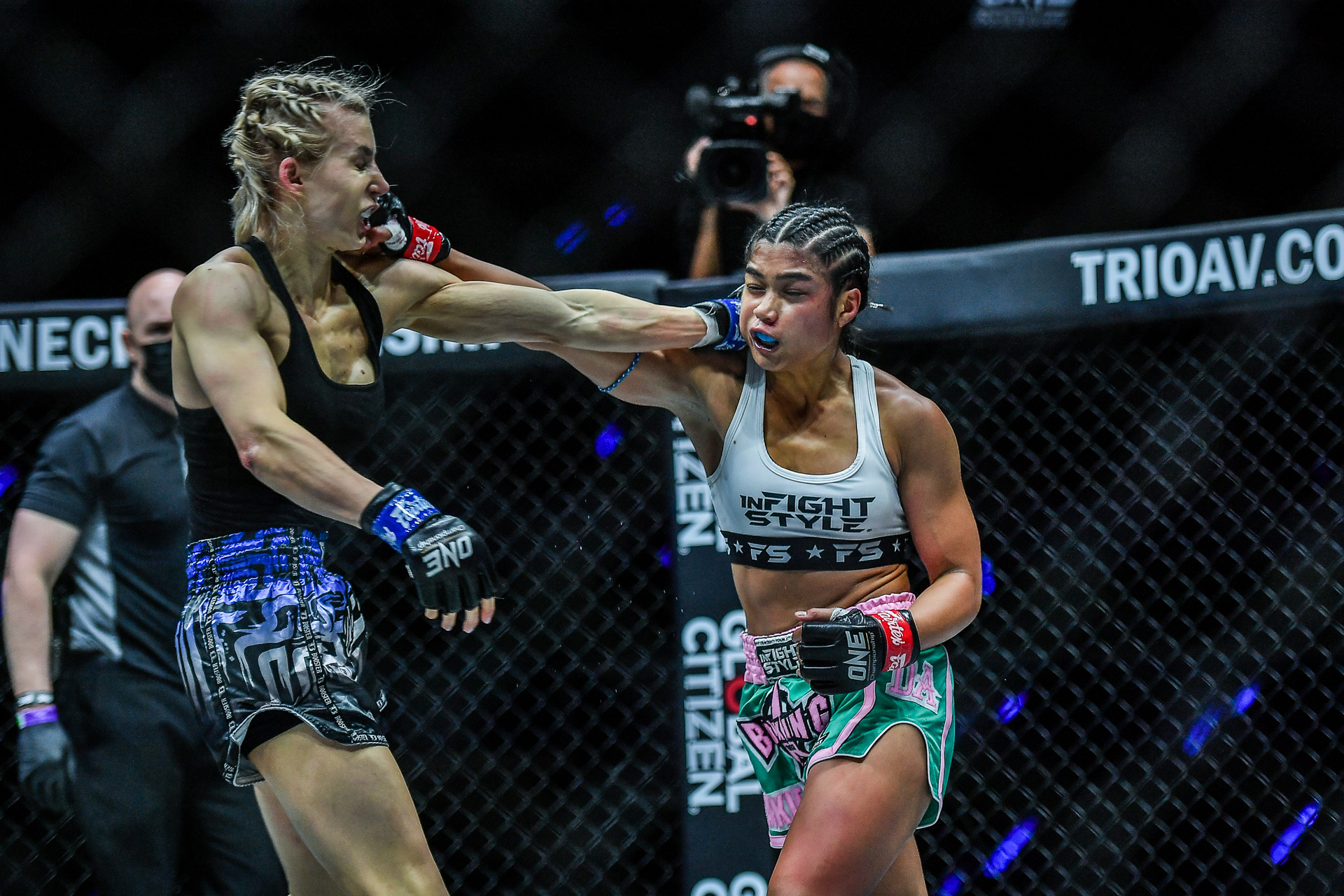 ONE 156’s Jackie Buntan: ‘That Title is My Number-One Goal’

There is a 24-year-old California woman who is ready to make big waves on the global Muay Thai stage, and her name is Jackie Buntan.

Buntan started training as a pre-teen, racked up a 20-5 record as ana amateur fighter, and now competes on the largest Muay Thai stage in the world for her weight class – ONE Championship. So, how did she get there?

“Growing up, I was always a tomboy,” Buntan told Combat Press. “I was always outdoors, interested in sports, and martial arts definitely intrigued me. And it wasn’t until I was 11 that I started Muay Thai. My brother-in-law introduced me to it, and I was just hooked. Like, even before looking at Muay Thai, knowing what it was – karate, Taekwondo or the more, you know, known martial arts didn’t really interest me – but something about Muay Thai just seemed so cool, so straightforward. I was like, ‘this just looks like I could actually use it in real life,’ and plus it’s really pretty to watch and see the fights. So that’s how it started. I’ve been with the same coach and same gym ever since I was 11. I’ve been with Bryan Popejoy and Boxing Works for 13 years now.”

Like many from Generation Z, Buntan stumbled upon Boxing Works through a Google search, and the rest is history. As a kid, she was the youngest of four Filipino-American girls, so she was left to pave her own path.

“It was pretty hectic in the household,” said Buntan. “You know, a lot of sibling fights and stuff like that. But I think I had a pretty normal childhood growing up. I was born and raised here in the States. I was kind of always in my own world. Like I said, I was always interested and fascinated with being outdoors, and I didn’t really like being indoors a lot. So, whether I was just playing outside alone or, you know, riding my bike, skateboarding, I just had a pretty normal childhood.”

Of the four Buntan kids, while a couple of them tried out Muay Thai in the early years, Jackie was the only one drawn to it as a life path. And, she has been pretty damned successful with it. After a lengthy amateur career, she was offered to make her pro debut with ONE.

“Starting out, my teammate Janet Todd, she’s the atomweight kickboxing champ,” Buntan explained. “And for the females, they only had atomweight. I think it was only atomweight, and one other heavy weight, maybe like 130 or 140 [pounds]. So, they didn’t have my weight class until maybe 2019, and that was when me and my coach were like, ‘Okay, this is it. The next goal is to get on to ONE championship.’ So, it was definitely something we’ve been working towards. When I got the news, it was just a bunch of excitement, really. It was just like, you know, a big opportunity presenting itself. And I knew that I was more than capable of taking it and being ready for it.”

ONE is not the only big show for kickboxing. Lion Fight is a global Muay Thai promotion that could have been a good fit, and there is the Dutch-style platform of GLORY Kickboxing. However, ONE is a bit different in that their fights take place in their patented circle-shaped cage, and they use four-ounce gloves, similar to MMA. Needless to say, ONE won the bid for the young phenom.

“Yeah, it was funny,” said Buntan. “It was the same exact time that GLORY Kickboxing was trying to offer me a contract as well. And of course, you know, I love Muay Thai. I started with Muay Thai, and ONE being I think definitely bigger, the clear choice was ONE Championship.”

Buntan made her pro debut against Wondergirl Fairtex in Feb. 2021. She then faced Ekaterina Vandaryeva in Apr. 2021 and Daniela Lopez in September. Three fights in less than seven months, and three wins by decision. Going the distance with three tough fighters put her right at the top of the division, but who was the toughest?

“Man, I’d say in terms of like not skill set – I mean, I’m talking like as a fighter and you know heart – I probably think Daniela, my last fight, you know?” claimed Buntan. “I know I hit her with a lot of hard shots, and, you know, head rolling back, but she just kept pushing forward. She kept coming in, and she really didn’t show any pain. I know I hit her hard, so I think she’s definitely the toughest in terms of all of them.”

It was later announced that ONE would be putting an inaugural women’s strawweight Muay Thai title into play in 2022. Buntan was offered that fight, which takes place tomorrow night at ONE 156 against another surging young woman in Sweden’s Smilla Sundell. To be offered the title only a year into her pro career was something Buntan was more than happy to accept.

“Oh man, it was a whole flood of emotions,” said the Californian. “I’ve dreamed many things that I’ve accomplished for so long – and, especially that opportunity – being able to compete for the first-ever strawweight title is huge. Again, it just put a lot of things in perspective in my life – that I’m really doing the right thing, and it’s taking me to the right places.”

Sundell has a unique story of her own. Her family moved from Sweden to Thailand when she was 12 years old, and she immediately took to Muay Thai. Only five years later, her family has since returned to Sweden, but she stayed in Thailand to pursue a fighting career. She trains out of Fairtex Pattaya, and made her pro debut with ONE only two months ago. She knocked out Diandra Martin in the third round, and is now facing Buntan for the inaugural strap.

“She’s a good fighter – good technique, very tenacious, very Fairtex-style – who comes forward and more aggression with that forward pressure,” Buntan said. “I’ve fought four girls her height – [5-feet-9-inches tall]. You know I’m [five-feet-4-inches tall], 125 [pounds]. I’m not super short, but, in my division, I have to deal with taller opponents and I’ve definitely dealt with girls her height and came out on top. So, I don’t view the height as a big thing to worry about.”

Like Sundell, Buntan lives a life very focused on her career. She works at the gym, coaching others in the art of eight limbs, and other than that, she just hangs out with her boyfriend and her dog, and she goes to the beach and restaurants, like any other 24-year-old. She is very much a full-time fighter through and through. And, tomorrow night, at ONE 156, live from the Singapore Indoor Stadium, she plans on taking a huge step early in her career.

“I’m the type of person who lives day by day, but obtaining that title is my number-one goal,” Buntan said. And I guess coming after that is to keep that belt for as long as I can and as long as I want.”

ONE 156: Eersel vs. Sadiković airs live on the ONE Championship website with the lead card starting at 5 a.m. ET, followed by the main card at 8:30 a.m. ET. Check below for full results.