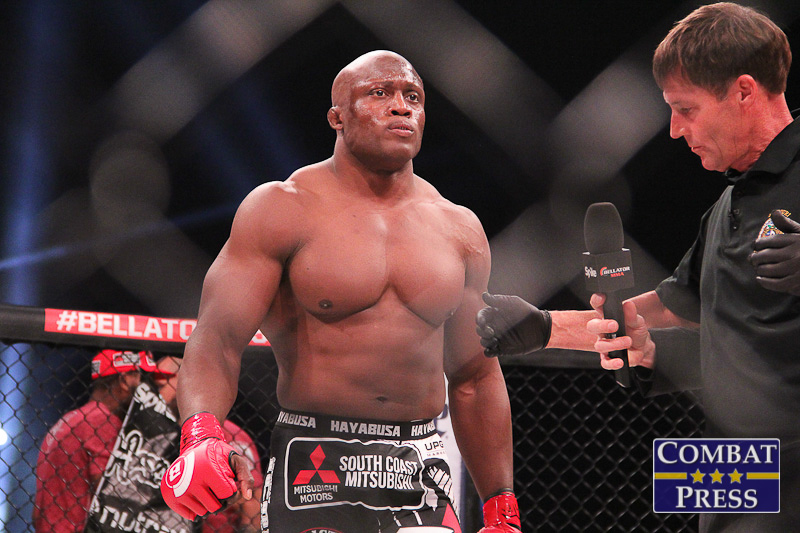 As I sat on my couch this weekend and watched a mediocre night of fights and a horror show of judging at Bellator 155, it wasn’t so much the fighters in the cage that caused the gears in my brain to start turning. Rather, it was the names of those mentioned in relation to fighters on the card. And what was tumbling through those gears? Just one thing: it’s time for another Bellator tournament.

In particular, I’m talking about the heavyweights. After Bellator’s recent decision to remove the title from around the waist of Vitaly Minakov, the promotion is in need of a new heavyweight kingpin. And with the company’s recent signing spree, the timing is perfect for Bellator President Scott Coker to do what he did so well in the final days of Strikeforce when he gathered some of the world’s best heavyweights into a single bracket that eventually sparked the rise of Daniel Cormier.

Bellator might not have quite the arsenal that Strikeforce had when it put Fedor Emelianenko, Alistair Overeem, Antonio “Bigfoot” Silva, Andrei Arlovski, Fabricio Werdum, Sergei Kharitonov and Brett Rogers into its tournament and later replaced Overeem with the aforementioned Cormier. However, the organization could certainly put together a Heavyweight Grand Prix “Lite,” so to speak, in order to fill the vacant heavyweight crown.

Dan Charles, who fought the undefeated Augusto Sakai at Bellator 155 and suffered plenty of punishment to his family jewels all for a majority draw outcome, has suffered a loss to Bobby Lashley. Meanwhile, Joey Beltran, who once lost to recent Bellator signee Matt Mitrione, nearly edged Chase Gormley on the scorecards. Neither affair was awe-inspiring, so these guys can probably be counted out for any tournament bid. However, those other names — Lashley and Mitrione — are intriguing.

Mitrione is one of Bellator’s recent acquisitions. He already has a fight slated for June against Carl Seumanutafa. If he emerges victorious, then he’s a strong candidate to star in a tournament for the belt. He is on a two-fight skid, but his losses came against Ben Rothwell and Travis Browne, a pair of heavyweights who are solidly planted in the UFC’s upper echelon. The big man may not have been in contention for the UFC strap, but Bellator could make good use of him in a tournament to decide a new champion.

Then there’s Lashley. The 39-year-old has torn through four Bellator opponents, including the aforementioned Charles and the well-traveled James Thompson. The pro-wrestler has a recognizable name, but he’s hardly viewed as a top heavyweight. A tournament bid would give Lashley one chance to prove that he can rise above legitimate competition and emerge with gold.

The Bellator promotion also recently added a fighter who was part of that historic Strikeforce tourney: Sergei Kharitonov. The Russian striker has not lost since his defeat at the hands of Barnett in the Strikeforce Heavyweight Grand Prix. The 35-year-old, much like fellow recent signee Mitrione, would be best utilized in an immediate tournament seeding.

Given the nature of the heavyweight division, where fighters hardly have the stamina to go three or five rounds in a single fight in one evening, this tournament would extend over multiple events, just like its Strikeforce counterpart. So, beyond these three obvious names, who else would make it in?

There’s Justin Wren, who could continue to spread the word about his cause of helping the Pygmy people of the Congo. The 29-year-old former The Ultimate Fighter participant abruptly left the MMA world in 2010, but he returned in 2015 as a member of the Bellator roster and reeled off two wins. His brief, but undefeated Bellator run and his charitable cause make him an excellent candidate for a tournament.

Of course, there’s also Cheick Kongo, who went from UFC gatekeeper to Bellator mainstay. Remember, the Strikeforce tournament delivered a number of fighters to the UFC who have contended for or won UFC heavyweight gold. The format can be a path to career resurrection, and Kongo is in desperate need of such a resurrection. His resume makes him worthy of consideration for a spot in the bracket.

Tony Johnson is another undefeated Bellator heavyweight who could enter this tournament and emerge with a Cormier-esque run that puts his name on the map. Johnson has defeated UFC heavyweight Derrick Lewis in the Bellator cage and holds a Bellator victory over the promotion’s former heavyweight champ Alexander Volkov.

This leaves two additional spots in an eight-man format. This is where we get to the wild cards.

How about Muhammed “King Mo” Lawal? The 35-year-old fighter has bounced between weight classes recently. His recent light heavyweight fight against UFC veteran Phil Davis ended in a controversial verdict in favor of Davis. Lawal could use an opportunity to bounce back. He edged the aforementioned Kongo on the scorecards in a heavyweight affair in early 2015 and ran through three opponents in a two-day tournament in the Rizin Fighting Federation that was contested at 100 kilograms, the equivalent of 220 pounds. Lawal brings a high-profile presence to the tournament bracket.

There’s no bigger wild card than Fedor Emelianenko. The Russian has led numerous media outlets — admittedly, this one included — on the runaround to determine where he’s going to land. The one lesson every journalist learns is that nothing is ever final with Emelianenko until he straps on the gloves and the opening bell rings. He may be talking about signing with the UFC, but Coker could lure the legend into a tournament.

The promotion could also give Sakai a chance to redeem himself in the tournament. He remains undefeated after the ugly Bellator 155 bout with Charles, and his Bellator resume includes a pair of stoppage victories.

Finally, Coker and company could decide to allow the stripped champ Minakov into the bracket. This is probably a bigger long shot than even a Fedor tourney berth. Minakov’s failure to defend the belt for so long will leave the Bellator brass reluctant to give him an opportunity to once again claim the championship.

While the roster of Bellator 155 may have laid a number of eggs on Friday night, there’s some inspiration to be had from other names mentioned at the event. Coker has masterminded an interesting landmark tournament before. We may not be looking at quite the same level of heavyweight stardom as Coker’s Strikeforce effort delivered, but perhaps it is time for Bellator to revive its tournament format once more and strengthen its heavyweight division by leaps and bounds.