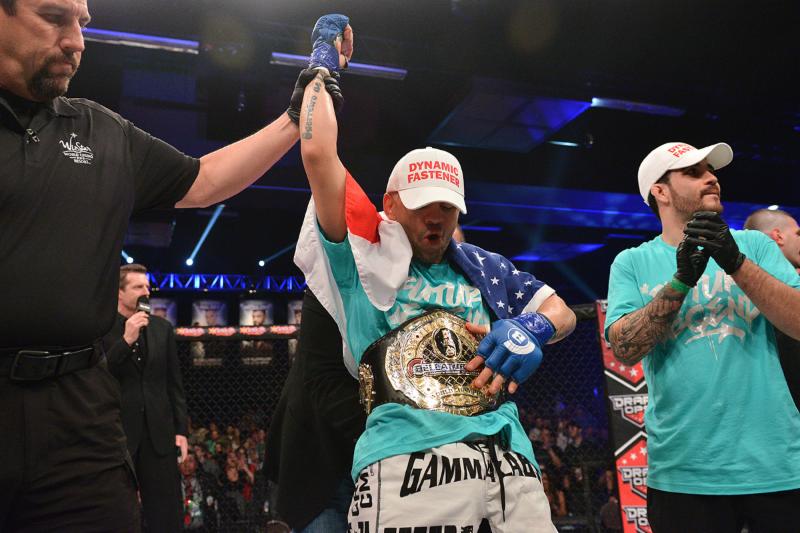 Bellator 150’s Marcos Galvão: Out to Even the Score

They say you don’t get a second chance to make a first impression. Well, Bellator bantamweight champion Marcos Galvão hopes to add that cliché to the list of ones we don’t really need to hear again.

Galvão seeks to even the score with his old rival, Eduardo Dantas, at Bellator 150 on Feb. 26. The first time these two met in 2013, Dantas was the bantamweight champion and knocked out Galvão in the second round.

“I shouldn’t have fought in that fight,” Galvão told Combat Press. “I make no excuses, but I wasn’t 100 percent. But I don’t dwell on the past; I always look forward to the next fight.”

This will actually be Galvão’s second opportunity to right a previous wrong. In 2011, he dropped a unanimous decision victory to former Bellator champion Joe Warren. However, Galvão submitted Warren last year with a kneebar that made Warren audibly scream in pain and gave Galvão the bantamweight title.

“I was very happy to submit a high-caliber fighter like Joe Warren,” Galvão said. “He is not easily submitted, but I have the best Brazilian Jiu-Jitsu and everyone will know about it after this next fight.”

Galvão has developed a nose for the finish over the last few years. He has gone 5-1 over his last six fights, with four of his five victories coming via TKO or submission. Before this recent stretch, Galvão’s last victory via finish came in 2010. He followed it by rattling off five decision victories.

“I’m finally going for the finish,” said Galvão, who sports an overall record of 17-6 and a current four-fight winning streak. “Before, I just wanted to win the mental game and I was just coasting a little bit. But now I’m going for the kill.”

Galvão’s rematch with Dantas will be his 10th fight under the Bellator banner. He previously competed for organizations like World Extreme Cagefighting and Shooto, where he faced fighters like Jin Akimoto, Kenji Osawa, Brian Bowles and Damacio Page.

“It is an honor working with Bellator,” Galvão said. “The other organizations are great, but Bellator is growing every year. I’m happy to be here.”

Much of Bellator’s recent growth has come courtesy of its tent-pole events that featured fights such as Tito Ortiz vs. Stephan Bonnar, Kimbo Slice vs. Ken Shamrock, Slice vs. Dada 5000 and the third meeting between Shamrock and Royce Gracie. Galvão’s rematch with Dantas comes on the heels of Bellator 149, which featured the latter two of these aforementioned fights. The Bellator 149 broadcast drew in the neighborhood of two million viewers.

“Royce is a legend of the sport and helped build mixed martial arts,” Galvão said. “I was excited to see him fight.”

Bellator has been on a campaign to come up with dream match-ups, often pairing legends of the past. What would Galvão’s dream match-up look like? He’d book a fourth match-up between MMA legends Wanderlei Silva and Kazushi Sakuraba. “The Axe Murderer” defeated Sakuraba by first-round knockout in all three of their meetings in Pride Fighting Championship in the early 2000s.

Could Galvão and Dantas put forth a similar trilogy as Galvão’s MMA heroes? We’ll have to wait until Friday to find out the answer to that question.