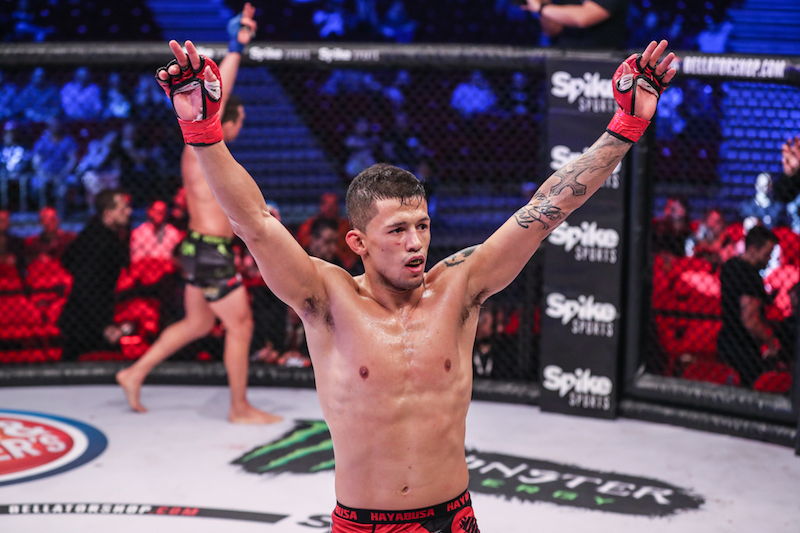 Bellator MMA has packed the last few months of 2017 with cards galore. The promotion kicks off October with Bellator 184, which takes place in Thackerville, Okla., at the Winstar World Casino on Friday, Oct. 6.

The main event of the evening takes place at the bantamweight level, where champion Eduardo Dantas defends his title against Darrion Caldwell. Caldwell was originally slated to face Dantas earlier this year, but he had to pull out of the fight due to injury. Instead, Dantas took on Leandro Higo and just made it out alive, getting the victory by unanimous decision.

The co-headliner heads up one division, where former Bellator featherweight champ Daniel Straus takes on Emmanuel Sanchez. Straus is looking to rebound from his loss in his first title defense to Patricio “Pitbull” Freire. A win against Sanchez would put Straus right back in the title picture. Sanchez, on the other hand, is building off victories over Marcos Galvão and Georgi Karakhanyan in his last two fights to make his case for his very own title shot.

Pat Curran, another former Bellator featherweight champion, is on his own quest to claim a featherweight title tilt. Curran goes up against John “Macapa” Teixeira. Teixeira is coming off a loss to Daniel Weichel in his last fight. Curran is currently riding a two-fight winning streak with victories over the aforementioned Karakhanyan and Sanchez.

Bantamweights kick off the main card when Joe Taimanglo tangles with Leandro Higo. Both fighters are coming off losses against the fighters in the main event.

After suffering a submission loss to Joe Taimanglo and then avenging the defeat with a decision win, does Darrion Caldwell really deserve this bantamweight title shot? How will he fare against the champion, Eduardo Dantas?

That’s a tough question to answer. It really depends on which side of the fence you stand on. Caldwell is easily the best challenger remaining who hasn’t faced Dantas in a title fight. On the other hand, you have a guy who isn’t on a winning streak that’s only getting a title shot after avenging a loss.

However, Caldwell is the best option for this fight. Dantas needs to fight, and Caldwell will definitely give him a tough time. Taimanglo is a good fighter, but Caldwell should have won their first encounter. Caldwell was riding an eight-fight winning streak prior to the loss and then immediately won their second encounter. It isn’t like Caldwell lost and then immediately fought someone debuting for Bellator to get back in the win column. No, he conquered the man who had previously conquered him. That’s how it should be.

Caldwell is a really good match-up against Dantas. The NCAA Division I 2009 national wrestling champ has some of the best wrestling in the lower weight classes. He has looked nothing short of world-class in his victories over Taimanglo, Joe Warren and Rafael Silva.

Caldwell and Dantas were supposed to meet at Bellator 177. Instead, Caldwell pulled out and Dantas faced fellow Brazilian Leandro Higo on short notice. Dantas didn’t look good in that fight, probably due to the short-notice nature of the contest. Dantas didn’t look good in his first go with Warren, either, and was out-grappled in the bout. Caldwell is at a higher point than Warren, and his wrestling will absolutely wear on Dantas over five rounds.

Caldwell will become the new champion.

The two fights immediately below the headliner could be seen as a tournament of sorts to determine the next featherweight title challenger. In one contest, Daniel Straus meets Emmanuel Sanchez. In the other, Pat Curran clashes with John “Macapa” Teixeira. Straus and Curran are former champs, whereas Sanchez and Macapa are seeking their first title reign. Which of these four men impresses the most and emerges as the next likely challenger to Bellator’s featherweight crown?

This portion of the card shows just how deep this division is for Bellator. All four of these fighters are great. Any of them could very well be the next champion. That being said, we have to pick two winners, and it’s the two former champs who have the edge.

Macapa struggled in his last fight against Daniel Weichel, who is another one of the top featherweights on the Bellator roster. Curran should pose the same sort of problems as Weichel, but with an even stronger grappling game. Teixeira is just not quite up to this level yet. Curran has a wealth of experience behind him and the skill set to complement it. Curran is the easier pick out of the two fights.

Straus has been a great fighter during his Bellator tenure. He’s another former Bellator featherweight champ, and he has beaten the likes of Patricio Freire and Curran. Straus is a hard-nosed fighter with tough wrestling that wears on any fighter that steps into the cage with him. He is very determined in getting the takedown and has general success in doing so regardless of his opponent. Straus also has a striking game that has improved with each passing fight. There is a huge difference between Straus now and where he was just a few years ago.

Sanchez is another well-rounded fighter with the ability to make it a fight on the mat, as well as standing. He also has the added bonus of making fights extremely close. Before his unanimous-decision victory over Marcos Galvão, Sanchez had five fights go to either a majority or a split verdict. He is known for those wonky decision outcomes. This doesn’t play well against someone like Straus, who can easily grind this fight out on the ground. Sanchez is lucky enough to have an offensive guard that makes him deadly, but Straus has been there and done that before. Straus has the wrestling edge that is just too good to overlook.

With Curran and Straus as the likely fighters to emerge with the victories, it’s probably safer to say Curran will come out the most impressive. He has a better chance at ending the fight with a finish.

Straus is coming off a fourth fight with the champion, the aforementioned Freire. A fifth fight is a reach, but this is one time it should absolutely be in the cards. Each fight between Freire and Straus has produced.

Of course, this all depends on Freire getting through the aforementioned Weichel at Bellator 188. If Weichel claims the championship, it doesn’t change much — Curran’s winning streak would still trump Straus, and especially with a finish. So, Curran will end up as the next one to get a crack at the belt.

Going to the undercard, it’s Steve Kozola and Carrington Banks.

Both fighters are undefeated and looking to remain that way on their climb up the ranks. They are bright prospects for Bellator, but for vastly different reasons.

Kozola has earned almost all of his victories by knockout while fighting in both the World Series of Fighting and Bellator. This includes his last three fights, all of which ended in a first-round knockout.

Banks carries a strong collegiate wrestling background and has gone 2-0 in Bellator. He also took part in The Ultimate Fighter 21 and fought under the Legacy FC banner.