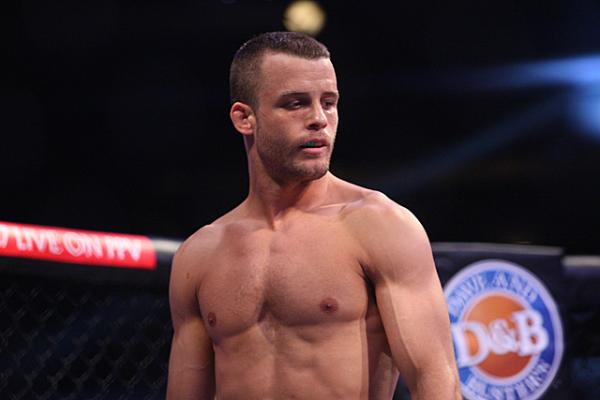 Fall From Grace: Can Pat Curran Pick Up the Pieces after Bellator 133 Loss?

It wasn’t that long ago that Pat Curran was considered among the best 145-pound fighters in all of MMA. A 19-4 record, combined with Bellator gold around his waist, had a good amount of fans wondering if “Paddy Mike” could hang with the big dogs of the UFC. But now, MMA fans have to be wondering if he can even survive among the sport’s second tier of competition.

It certainly didn’t seem like it by the conclusion of Bellator 133, where the former champion dropped his second consecutive fight. On paper, his opponent, Daniel Weichel, represented a guy who Curran could defeat and use to catapult himself back into title contention. A win over the Bellator Season-10 Featherweight Tournament winner would’ve certainly been a nice stat on Curran’s resume. But it was not to be. Weichel was able to take home a split decision win over the former champ.

Curran’s performance didn’t look anything like the performances we’ve seen from him in the past. One needs to only look back a few years to see Curran dropping Marlon Sandro and wrecking Joe Warren en route to becoming the Bellator featherweight champion. Curran would go on to take a split decision win against Patricio Freire and secure a tapout against Shahbulat Shamhalaev. Yet, as Curran’s star power hit an all-time high, Curran was facing his own personal demons.

At Bellator 106, Curran dropped the title to Daniel Straus in a one-sided affair. While Curran wasn’t beaten pillar to post, he looked lost inside the cage. The fighter stepping in to face Straus wasn’t the same Curran to whom fans had grown accustomed. Following the loss, Curran explained why his performance was subpar.

“More than the fight in general, it was my personal life leading up to the fight, which I was able to take care of and get sorted out. To sum it, I suffer from severe depression and anxiety issues. I’ve been dealing with this for a long time, but I was recently able to find this out what it was and address it. I’ve been seeing a doctor, and I got the right medication. And since I sought help and took the steps to change that, I’ve become a new person. I’ve completely changed my world, and I’m feeling great right now,” Curran told MMAFighting.com.

With his personal demons seemingly behind him, Curran recaptured the featherweight strap in front of a raucous pro-Curran crowd at Bellator 112. But that win seems like a distant memory. Curran was bested by his Brazilian rival Freire at Bellator 123 and then suffered a loss at Bellator 133. Those defeats have sent the Crystal Lake native spiraling down the featherweight rankings.

While it may seem the sky is falling in Curran’s quest for Bellator gold, all hope is not lost for Curran and his fan base.

Although Curran has dropped back-to-back fights, it’s not as if he’s getting blown out the water by his competition. According to CompuStrike, Curran landed 54.2 percent of his total strikes thrown while Weichel was only able to land 31.1 percent of his strikes. Weichel outworked Curran, throwing 34 more total strikes, and ultimately it was Weichel’s forward pressure and work rate that won him the fight. In his bout with Freire, Curran outlanded his opponent in total strikes, but it was Freire’s significant strikes that took the gold from Curran. So, at first glance, it would seem Curran is still following the rules of MMA 101, which is hit the other guy more than he hits you.

Avoiding damage will go a long way in helping Curran sustain a longer career, too. It’s hard to believe, but Curran, even though he’s only 27 years of age, has already had what would amount to a lifetime’s worth of fights for many guys. With 27 fights under his belt, Curran can be considered a seasoned veteran. Yet, despite all of his activity, Curran has only been finished once and that was via submission in 2009.

Curran should be entering his athletic prime and has the experience of a veteran to fall back on after consecutive losses. He hasn’t shown a drastic decline in skills and is still a tough match-up for virtually everyone in Bellator’s 145-pound division. But where does a man who has lost consecutive fights go from here?

The answer is a bit cliché but definitely rings true: he goes back to the drawing board.

Curran’s game is solid and well balanced, so he shouldn’t start over completely. But adding some new wrinkles into his game would be beneficial for the former champion. If Curran is going to continue being a slick stand-up fighter, he may want to look into utilizing more power strikes. He is pretty adept with his head movement and defensive skills on the feet, but he isn’t throwing enough to win by pure volume punching alone. Considering how much MMA judges value visible damage to an opponent, the former Bellator champion would be wise to sit down on his counters a bit more to put some extra power behind them.

Another wrinkle Curran possesses but hasn’t shown much in recent years is his grappling game. We saw it at Bellator 95 with his submission win over Shamhalaev, but there’s so much more to Curran’s grappling game. As anyone in the Illinois-Indiana area knows, Team Curran (Pat and his cousin Jeff) have a fantastic grappling program. Even if it’s just to score some points to close out a round or keep his opponent off balance, Curran should utilize his grappling skills more. He attempted to do so against Weichel at Bellator 133 but with mixed results. I don’t know how much work Curran put in the gym for his takedowns, but if he’s going to lose a statistical battle on the feet, then taking a fight to the ground couldn’t hurt his cause.

With Bellator’s tournament format going by the wayside, Curran also benefits from his rivalry with current Bellator featherweight champion Freire. Despite Curran’s lack of resentment toward the Brazilian, it’s clear the feeling isn’t mutual. With their current series standing at 1-1, Curran needs only a few wins to put himself right back into the title picture with a marketable fight for Bellator CEO Scott Coker, a man who is known to have no issues with putting entertainment before rankings when he greenlights a match-up.

Curran is enduring a struggle unlike any he’s faced before. He has consecutive losses, but if history has shown us anything, it’s that the man knows how to be resilient and bounce back. If he can win his battle against depression, I’m inclined to believe he can handle the current situation in which he finds himself. Despite the setbacks, Curran is still one of Bellator’s most recognizable faces and has the best years of his career still ahead of him. With all the positives outweighing the negatives, look for “Paddy Mike” to rebound and insert himself back into title contention with his upcoming bout.