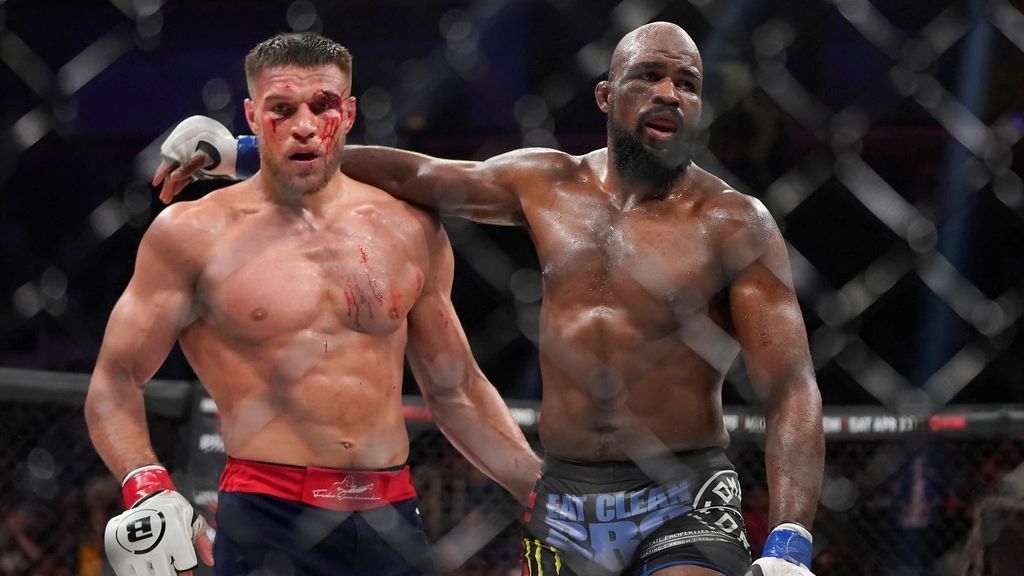 Bellator is making a trip to Chicago, Ill., for their 16th event of the calendar year. Bellator 288: Nemkov vs. Anderson 2 will be headlined by two title fights with a handful of rising prospects on the undercard. The fight card currently features fifteen bouts after Jaylon Bates vs. Journal Lugo was scratched due to Bates pulling out.

In the main event, Vadim Nemkov and Corey Anderson are finally ending the Bellator light heavyweight grand prix. They first fought in April, where Anderson dominated before an accidental clash of heads led to a no-contest. ‘Overtime’ has an opportunity to claim the one million dollars he was on track to win, and the Russian has a chance to flip the script.

Patricky “Pitbull” Freire is looking for his first lightweight title defense in the co-main event. The Brazilian world champion just started his title reign, but he’s taking on arguably the best fighter in the division, Usman Nurmagomedov.

The Bellator 288 preliminary card airs live on YouTube starting at 6 p.m. ET, followed by the main card on Showtime at 9 p.m. ET. Check out the full preview and predictions below.

The first meeting between Vadim Nemkov and Corey Anderson ended in anti-climatic fashion; does the second showdown have a definitive ending?

Vadim Nemkov needs to make significant adjustments after fighting Corey Anderson in April. Overtime proved too much for Nemkov to handle before the anti-climatic no-contest. Anderson missed out on becoming the Bellator light heavyweight champion, but more importantly, he didn’t win the one-million-dollar prize. Anderson can right his wrongs by beating Nemkov at Bellator 288.

The Russian is used to mixing up his low-volume, accurate striking with wrestling. Anderson negated those skills and dominated on the ground in their first fight. Nemkov needs to keep the fight standing and out-strike Anderson from a distance, but the wrestling pedigree of Overtime should be the difference-maker once again. Anderson by unanimous decision.

Does incumbent champion Patricky “Pitbull” Freire have enough left in the tank at 36 years old to hold off the undefeated Usman Nurmagomedov?

Pitbull needs to make this fight ugly. Whether striking or grappling, Nurmagomedov has looked world-class as he continues to evolve. With that said, the Brazilian tends to find success when his opponents start to brawl instead of keeping the fight technical. Nurmagomedov should be able to show the hype is real and win the lightweight title inside the distance.

Daniel Weichel welcomes Timur Khizriev to the Bellator cage; does the veteran become the first person to beat the Russian prospect?

Daniel Weichel and Timur Khizriev are at opposite points in their MMA careers. Despite his first-round finish last fight, Weichel is 37 years old with his best fighting days behind him. On the contrary, Khizriev is 26 years old and making his Bellator debut after building a perfect 11-0 record.

Weichel has experience as an advantage which could pay dividends at Bellator 288. Khizriev is aggressive and talented but seems to get impatient and wildly hunt for a finish. ‘Drake’ has fought the best featherweights in Bellator history and likely won’t make any mental errors. Unfortunately for Weichel, Khizriev is ruthlessly aggressive, which should lead to a finish before the third round.

The sleeper match-up is a lightweight preliminary bout between Killys Mota and Jairo Pacheco. Mota was once an 11-1 prospect with a solid win against Mandel Nallo. He then racked up experience in two consecutive losses before bouncing back against Dan Moret in June.

Meanwhile, Pacheco is making his Bellator debut with a record of 7-0 at 25 years old. ‘Mumuzinho’ is an impressive prospect, but he’s never fought an opponent like Mota. Pachecho has an opportunity to put the division on notice, while Mota looks for respect by taking out the undefeated Brazilian.