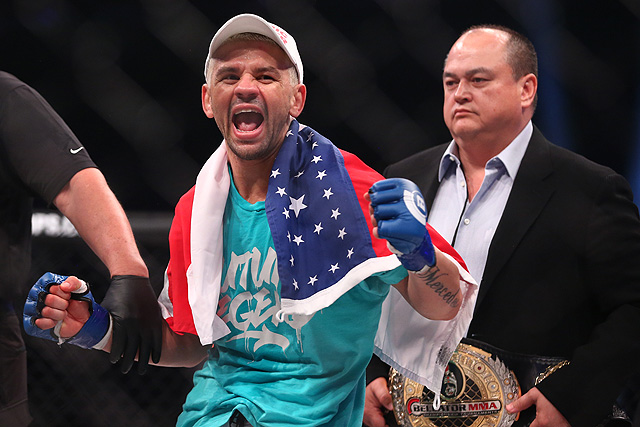 After one of the more, um, interesting Bellator cards in recent memory, Bellator MMA comes back one week later with Bellator 150 at the Kansas Star Arena in Mulvane, Kan. The main-card lineup will consist of five fights.

The main event of the evening is a bantamweight championship rematch. Current champion Marcos Galvão defends his belt against former champ Eduardo Dantas. In their first meeting, Dantas was the champion. Now, the tables are turned on the former student. Dantas was able to come out victorious with a TKO finish of Galvão, but Galvão will look to change his fortunes in their second go-around.

The co-headliner takes us several weight classes up, where heavyweights Cheick Kongo and Vinicius Queiroz clash. Kongo, a former UFC heavyweight, will look to continue his winning ways after taking out Alexander Volkov in his last fight. Queiroz, on the other hand, will look to extend his two-fight winning streak.

With Bellator set to crown a women’s flyweight champion at some point this year, Lena Ovchynnikova is out to stake her claim at the first crack at gold when she meets Rebecca Ruth. At lightweight, David Rickels returns against Bobby Cooper. Another UFC veteran, Kendall Grove, also returns to action in an effort to put together his first winning streak since 2013. Grove faces Francisco France.

The Bellator 150 preliminary card will air on Spike.com beginning at 7:40 p.m. ET. The main card action will air live on Spike TV beginning at 9 p.m. ET.

Galvão and Dantas previously met at Bellator 89 three years ago. Dantas reigned supreme that night with a second-round TKO of his former mentor and training partner. Dantas later dropped the title to Joe Warren and then Galvão defeated Warren to claim the title. Dantas and Galvão were expected to meet late last year, but an injury to Dantas forced the date change.

It will now be almost a year since both fighters have been inside a cage. Dantas last fought in May in a unanimous decision victory over Mike Richman. Galvão last fought in March 2015 in the title fight against Warren. It will be interesting to see just who gets the benefit from the time off. Neither fighter is really known for their high activity, though.

The last fight played just as it was expected to unfold. Dantas had an edge in the striking department and Galvão had the edge on the ground. Galvão couldn’t really get his ground game working, however, and he was overwhelmed on the feet. Dantas has a four-inch reach advantage and should be able to once again settle into his striking.

The 27-year-old Dantas did struggle in his last fight against Richman. He had trouble overcoming Richman’s size advantage and lost exchanges on the feet. Dantas also tried to switch his game up against Richman by using takedowns to control the fight, but he couldn’t figure out how to continue that success over three rounds.

This might be a closer fight than expected. Galvão has looked the better of the two since their first fight. He smothered Warren on the ground, something Dantas failed to do, and eventually was able to work in a leglock to finish the fight. “MMA math” says Galvão beat Warren and Warren beat Dantas and therefore Galvão should beat Dantas. However, Dantas did defeat Galvão before, which complicates the equation.

The outcome here totally depends on which Dantas shows up. Will Dantas feel comfortable to keep Galvão on the feet, where Dantas has the edge, or will he look to the ground in an attempt to smother Galvão? The former happened the first time, and the former should happen again. Dantas by TKO.

Kongo has been a real mixed bag in his Bellator tenure. He has faced and beaten some of the best heavyweights in the sport, but since entering Bellator, and despite a 5-2 record with the organization, he really hasn’t been able to perform when he is put against the better names in the promotion.

Kongo is coming off a victory over Alexander Volkov just over a year ago at Bellator 139. However, beyond Volkov, the only other big name on his record would be Lavar Johnson. This should speak volumes. The 40-year-old Kongo has come up short against Muhammed “King Mo” Lawal — based on size alone, it’s a fight Kongo should have won — and a loss against champion Vitaly Minakov. Whether it be age or some other factor at work, Kongo, who has proven before that he is one of the better heavyweights on the planet, just struggles in big fights.

Queiroz isn’t the type of big name that tends to give Kongo trouble, and the Brazilian should be the underdog in this fight. Kongo has a smothering top game. When he brings you to the ground, you’re staying right there. The style isn’t particularly fan-friendly, but it’s what gets the job done. Kongo will also enjoy a few inches in reach over Queiroz, which could help him secure the takedown better and keep Queiroz away from landing the knockout blow.

Queiroz could conceivably take this by either submission or knockout. He has flashed some leather before, most notably against the aforementioned Johnson. His most recent victory was a choke submission, albeit against Ewerton Teixeira, a striker.

There is no doubt Kongo is the better fighter on paper. With the reach and strength advantage, he should take the win by unanimous decision.

Much like Kongo, Grove has been a mixed bag under the Bellator banner. He was absolutely dominated by Brandon Halsey in May, but bounced back with a quick TKO victory over Joey Beltran. Beltran isn’t exactly a name that will drive Grove back to a title shot, but it was a nice bounce back after the loss to Halsey.

Grove is going to be the longer fighter in this contest. His long limbs not only give him the ability to keep opponents at a distance on the feet, but also help the UFC veteran in securing positions and submissions on the ground. Grove’s strength is on the ground, where he has secured 10 of his 22 victories via submission. He has a weakness on the feet, where his chin has been targeted to the tune of seven knockouts in his professional career.

Grove’s best chances come on the ground, and France’s best chances come there, too. Out of France’s 13 victories, a total of 12 have come by way of submission. France upset the odds in his last fight against wrestler Ben Reiter at Bellator 146. It was the Resurrection Fighting Alliance veteran’s Bellator debut and he was able to secure the submission against a good up-and-coming fighter in the company’s middleweight division.

Grove should be able to use his four-inch reach advantage to keep France at a distance and therefore stay away from becoming yet another submission victim. The result of his efforts will be a decision nod in Grove’s favor.

Rickels gets a chance to get back in the win column after a loss to Michael Chandler and a no-contest against John Alessio last year.

Rickels is a very fan-friendly fighter who puts it all on the line in the cage. The 27-year-old’s biggest strengths come from his power and aggressive style. If he can land a couple of shots, he’s likely to put his opponent on his back. His aggressiveness does have its downfalls, though. Rickels can leave himself exposed when he pushes a tad too hard.

Cooper has bounced around a few different promotions over the past few years, including the RFA and Titan FC. Cooper has previously fought twice in Bellator, and he won both times. Cooper’s last fight came against Pablo Villaseca at Bellator 139 in June. Cooper was able to secure the split decision in a closely contested bout.

Rickels is Cooper’s toughest test in the last few years. He could continue Cooper’s streak of alternating wins and losses. Rickels suffered his four losses against some of the better names in Bellator, including Patricky Freire, Karl Amoussou and the aforementioned Chandler (twice). Rickels typically takes the non-top three of Bellator’s lightweight division and dispatches them with ease, and this is another one of those situations. Rickels by first-round TKO.

Bellator is beginning to fill in the women’s MMA division gaps the UFC has yet to produce. Here is one of those divisions: women’s flyweight.

Ovchynnikova is one of Bellator’s bigger signings on the women’s side. Her record may be misleading. She owns eight of her 10 victories by submission, most prominently by armbar, but to call Ovchynnikova a striker may be an understatement. She has bounced between kickboxing and MMA for some time now. The 28-year-old hasn’t fought in MMA since October 2014, though, which could be a little bit of a hurdle heading into this fight. This would be her first appearance with a major promotion after bouncing around smaller promotions across the world, most notably the Super Fight League where she dropped a decision to UFC strawweight Joanne Calderwood.

Ruth has fought primarily for Shamrock FC, with one fight — a split decision loss to Jocelyn Jones-Lybarger — under the RFA banner. The 37-year-old has also fought much more frequently in MMA than Ovchynnikova. All five of Ruth’s victories came by TKO. This outcome could be tough to come by against Ovchynnikova.

Bellator is notable for handing out what should be easy victories for fighters it wants to see shine later on in the year. The company is crowning a women’s flyweight champion later this year, and Ovchynnikova is a top candidate for a title reign. Ovchynnikova will get the win, most likely a finish, to help bolster her rep before vying for the belt later in the year.