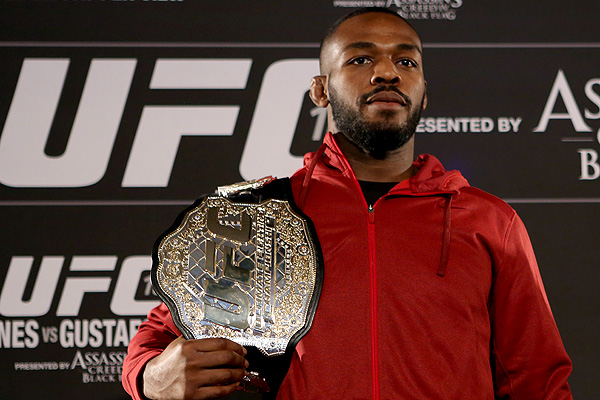 The Disdain for UFC Champion Jon Jones Is Not About Race

Take a moment to think about three UFC fighters you’d spend your hard-earned money on to see fight. Was Jon Jones one of them? If he wasn’t, it’s because he is black. Or, at least that’s what UFC commentator Joe Rogan believes.

Rogan, speaking on his podcast about Jones’s lack of popularity, took the stance that racism could be the contributing factor as to why Jones isn’t perceived more favorably amongst MMA fans. He made comparisons between Jones and Chael Sonnen to highlight his point.

“I think that if he was a white guy and he was doing the same thing, a la a Chael Sonnen, I think he would be way more popular,” Rogan said on the podcast. “Chael was never the successful athlete that Jon is, but I think Chael was way more successful as a promoter than Jon is. Jon has not been nearly as cocky or outwardly braggadocious as Chael was.”

I find it hard nowadays to say race has nothing to do with a particular event. Our society has reached incredible sensitivity levels when it comes to racism, gender issues and political correctness. While it’s fair to say we can never have too much awareness when it comes to racism, we also need to be mindful of not using that as a crutch to explain things we don’t understand.

Rogan has some fascinating opinions, and if you haven’t heard him talk outside of his UFC or network television arenas then you really are missing out on some mind-blowing discussions. Someone blaming racism for the lack of popularity in that individual isn’t much of an unprecedented event, but it’s surprising for it to come from somebody who has had their pulse on the world of MMA for such a long time.

One of the biggest draws from 2007-2010 was Quinton “Rampage” Jackson. Here was a fighter who embodied everything people were looking for. The way he was able to sell a fight, build rivalries, make people laugh with his charismatic personality and flourish with a somewhat brawler like fight style, that was the perfect combination to entice fans to spend their money. He still portrays himself as he did a decade ago, but his lack of success in the UFC and eventual release has diminished his star power quite a bit.

One can even take a look at Kimbo Slice, another example of a black fighter that took the MMA world by storm around the same time Rampage was rising in the UFC. People were amped to watch Slice fight, and he helped drive MMA to network television when EliteXC featured him on card that was broadcast on CBS. Slice was also brought in by the UFC for a season of The Ultimate Fighter for a shot to earn his way onto the roster. UFC President Dana White scoffed at Slice at first, but saw how intrigued the fans were in his story. If racism factored into the fandom of the majority of MMA fans, then how in the world would somebody like Slice move the needle the way that he did?

Phil Davis doesn’t grab the attention of fans. Rashad Evans isn’t somebody we have to watch fight. Demetrious Johnson may very well be the most complete fighter in the world, but he’s often an afterthought to most fans of the sport. Does that make the fan base racist? Give Davis the personality and knockout power of Rampage. Substitute out Evans’s 10 wins by decision a insert 10 victories coming with the same head kick with which he nailed Sean Salmon. Have the UFC spend more effort promoting the flyweight division so the mainstream can see how great Johnson really is.

Popularity in fighters is about how they appeal to fans. Some fans want to see an exciting product, with nothing but blood and knockouts. Other fans appreciate the beauty of the sport when it goes to the ground and both fighters are trading precise technical moves with each other. We, as fans, are not looking ahead to future events and making our plans based on who’s black, white or from the many other beautiful races we have out there in this world. For Rogan to suggest Jones isn’t popular because of his race is completely reckless.

The divide within our culture is never more apparent than when it comes to social issues. In many instances the divide is created with how those issues are addressed. There are those who have a sincere interest in understanding an issue before passing judgment, and there are those who immediately start crying out and pointing fingers. Instead of taking into account everything Jones has done in the public eye over the last few years, Rogan is using skin color as an avenue of reason.

There was the cancellation of UFC 151, in which public perception was that Jones was to blame for not stepping up and taking on a new opponent when Dan Henderson went down due to injury. Dana White certainly didn’t do Jones any favors in that situation. Were fans upset with Jones because he was black? No, they were bent because they wanted to see him fight.

Jones had to endure flak for poor judgment as well for driving under the influence and crashing his car into a pole. There have been other incidents of Jones not making the best choices on social media. And, of course, his two biggest feuds have come against a couple of the sport’s most well-liked people in Chael Sonnen (outside of Brazil and prior to his latest failed drug tests) and Daniel Cormier.

Rogan is an outstanding commentator. Just because he views the negativity towards Jones the way he does doesn’t take any credibility away from him or the great job he continues to do. Rogan has since expressed his displeasure with MMA media outlets drawing attention to his opinion on this by saying he has been misquoted and the story is only being reposted for “clickbait.” That’s not our intention here. Anybody can post a headline and get somebody to click on it. What we’re trying to do here is establish a true reason why Jones isn’t everyone’s favorite fighter. And it has nothing to do with race.

There is so much more that goes into the popularity of a fighter, and one shouldn’t be so quick to use the broad stroke of racism, especially somebody in the position of Joe Rogan who has such a prominent voice in the UFC landscape. All his comments have done is push real examples of racism below the headlines of the irresponsible comments he made on his podcast.