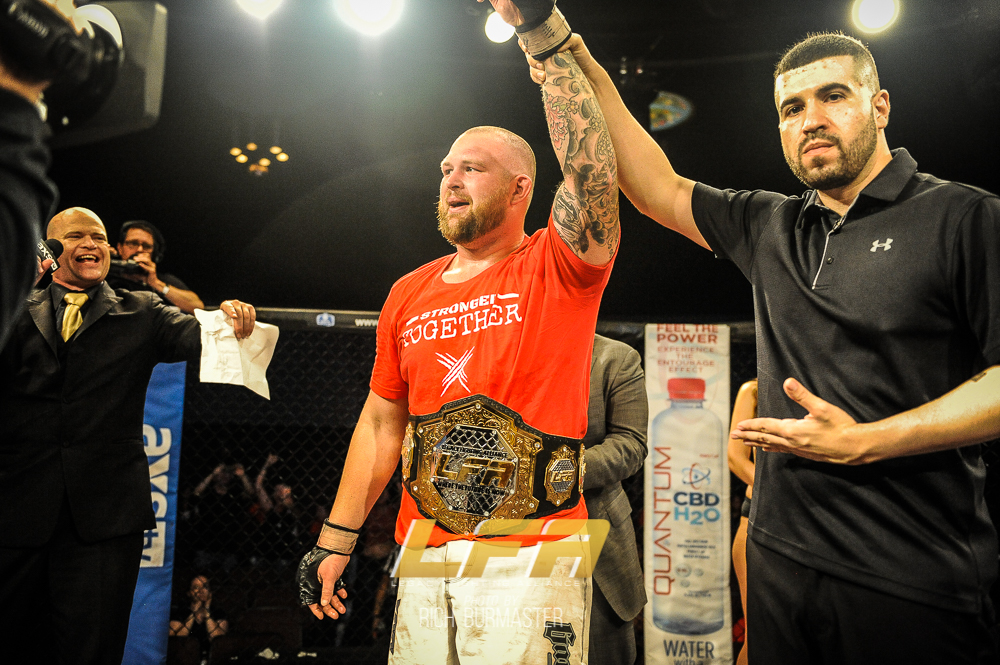 Let’s start with the heavyweight division, a weight class that has added new talent, but needs more talented fighters on the roster to deepen the division. It’s still one of the toughest classes to fill, but there is good talent available.

The title of world champion in Greco-Roman wrestling is a very high accolade for any mixed martial artist. It immediately makes them an intriguing prospect. Aliakbari is just that, and he has already found success eight fights into his career.

The 6-foot-4, 250-pound Iranian monster is highly explosive and powerful, whether he’s throwing meat hooks on the feet or shooting takedowns on his opponents. He trains at American Kickboxing Academy Thailand, where he’s been working diligently on his striking. That said, he does his best work when he closes the distance and grounds his opponent. From there, he can use his devastating ground-and-pound to score stoppages.

After taking his first career loss at the end of 2016 against Mirko “Cro Cop” Filipovic, Aliakbari had a strong 2017. He scored first-round stoppages due to strikes over massive Brazilian striker Geronimo dos Santos and The Ultimate Fighter alum Tyler King. Those wins, coupled with past victories over Valentin Moldavsky and Heath Herring, prove Aliakbari can hang with the big boys.

Aliakbari could definitely hang in the UFC, so long as he can get out of his contract with the Rizin Fighting Federation and get a respectable number from the world’s top MMA promotion. The UFC should target Aliakbari to help bring depth to a division in need of it.

Poland has been a bastion of MMA talent in recent years, but Andryszak has been around for a little while developing into quite the prospect. In recent years, he has become a top European heavyweight talent. He has 26 pro fights at just the age of 25.

Andryszak is a monster of a man, standing 6-foot-5 and weighing over 250 pounds. He is heavily muscular, too, which is why he’s so powerful with his striking and his ground work. His best work comes on the feet, where he throws with grit and is willing to take a punch to hand one out in devastating fashion. Most of his wins come via knockout, showing he doesn’t like leaving fights up to the judges.

2017 was very good to Andryszak, who destroyed the competition with three first-round stoppages. Not only did he submit fellow Pole Michał Kita, he destroyed former KSW heavyweight champion Fernando Rodrigues with strikes and smashed through a veteran of this prospect series, Denis Smoldarev. The stoppage over Smoldarev came via knees, in what can only be described as a violent end to a fight.

In his last 12 wins, Andryszak has not left the first round. UFC President Dana White loves guys who finish fights, so Andryszak should be a priority signing. He would have to get away from KSW, however, which could be tricky.

The only representative of the United States in the heavyweight category of this series, Hughes has quietly floated under the radar. However, now that he’s the Legacy Fighting Alliance heavyweight champion, he has re-emerged onto the radar and is ready to prove he belongs in the UFC.

Hughes does not really excel at one part of MMA more than any other, making him a jack of all trades. He’s pretty spry for a guy his size and moves very well. He is good from the top on the mat, which is how he earned wins in most of his amateur bouts and some of his pro fights. He’s tough as nails, too.

After ending 2016 with his only career loss to UFC vet Dan Spohn, Hughes came back in 2017 with a 2-0 run that included the LFA title win. His victories came by unanimous decision over Ryan Pokryfky and Richard Odoms, the latter of whom Hughes bested for the title he now holds.

Hughes may need to score at least one more win before the UFC comes calling, but he’s put himself in the position to secure a roster spot with the company after securing the LFA title. He needs to score more finishes, though, since decision wins tend to dull the interest from the UFC brass.

There are usually two types of heavyweights in MMA. They are usually either short and walk around with a beer belly, or they are tall and powerful. Prasel, who stands 6-foot-7, falls under the latter category.

Prasel is a very good submission fighter. Because of his size and length, he’s able to handle himself on the feet as well, using distance and long strikes to score damage and set up takedowns. Not only does he have good chokes on the mat, but he loves looking for leglocks and does so with success.

Prasel only fought once in 2017, but it resulted in a huge victory. He scored a 43-second toe-hold submission of Edison Lopes to capture the Aspera FC heavyweight championship. He’s done all this by the age of 27, and he appears to be getting even better from fight to fight.

His title win probably put him on the UFC’s radar, and rightfully so. His natural gifts and MMA skills make him an enticing prospect that could definitely hang at the highest level. The UFC goes to Brazil enough in each calendar year, so when the UFC touches down in his homeland, Prasel should be a guy the company considers to add to the card.

The second Brazilian on this list, Souza may have less experience than Prasel as a pro, but he is just as talented, if not more so. That’s a high compliment for Souza, as Prasel is a scary man to stand opposite of in the cage.

A member of the Nova União network, Souza has the trademark ground game, but he also has very powerful striking. All of his fights have come to an end via finish, with five knockouts and one submission. The fact that he’s a finisher makes him an even more intriguing prospect — it’s what fans pay to see.

2017 was Souza’s best year to date. He scored victories over two notable opponents. He opened the year by knocking out TUF Brazil veteran Job Kleber. Then, he tapped out Marcus Vinicius Lopes. The win over Lopes scored Souza the Jungle Fight heavyweight championship, which should bring him great hype and attention.

Like Prasel, Souza is a guy the UFC should snag when the company touches down in Brazil. He’s a high-value prospect that could make waves in the UFC heavyweight division.