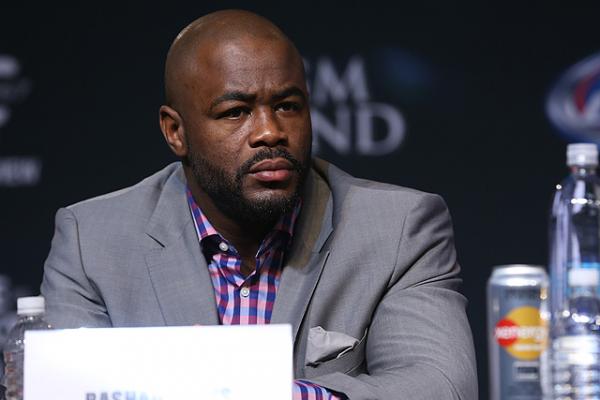 Dropping down a weight class has become all the rage the past few years as more and more fighters look for a competitive advantage and a clean slate.

Rashad Evans already made one move down after competing at heavyweight on The Ultimate Fighter. For the last couple of years, Evans has teased yet another move down in weight class, this time to middleweight. However, Evans has been more than comfortable staying at light heavyweight.

Despite the tease every now and again, the 35-year-old has won his last two fights as a 205-pounder. Evans last fought in November 2013 when he defeated Chael Sonnen by first-round TKO. He was originally slated to fight Daniel Cormier earlier this year and has been linked to a couple of bouts since then, but injury has kept him sidelined.

As much as he has teased a move to 185 pounds, the drop to middleweight may never happen for Evans. The door is closing for the former champion, who isn’t getting any younger. A drop to middleweight, which means cutting 20 extra pounds, might get tougher the older he gets. That’s not to mention just how dangerous it can be to try to navigate the waters of the middleweight division’s top tier. The 185-pound division is filled with great contenders. It is possibly the deepest the UFC middleweight division has ever been, so getting to champion Chris Weidman is a tough road to travel.

Evans is a great fighter. His losses have been to high-level opponents. Lyoto Machida served Evans his first loss, and it came in the first defense for Evans. Then, in another championship affair, there was Jon Jones. A year later, Evans dropped a decision to Antonio Rogerio Nogueira. Those are the only three losses of the former champ’s career, and only Machida was able to finish Evans.

Despite talk to the contrary, Evans is more likely to stay at light heavyweight. Why put himself through the added torture of a weight cut to 185 pounds when he can collect paychecks while fighting at 205 pounds, where he’s still a top-10 fighter? Furthermore, he is sinking into his role as an analyst on Fox and these one-off fights seem to suit him. He hasn’t maintained the type of rigorous schedule that would allow him to quickly climb the ladder to contendership, and he’s far enough removed from his light heavyweight title reign that an instant free pass to the front of the middleweight contender line seems like a longshot.

A move to middleweight could potentially spell career suicide. Sure, Evans has a better shot at a title bid at 185 pounds than he does at 205 pounds. After all, Evans has already fought — and lost to — Jones, but he has yet to fight Weidman. But, Evans has been out a while. He’s going to need at least a few fights before stepping up to face Weidman. Given his long layoff, he could return and find that ring rust is difficult to overcome. Or, he could run into weight-cutting issues that result in a poor performance and a loss in his middleweight debut.

If a move down is to happen, it shouldn’t be until after his next fight. Evans needs to take a fight at light heavyweight, see how it feels and then move down to the 185-pound weight class. But that is a big if.

Evans isn’t exactly known as an active fighter these days. He has already had major time off in between fights a few times, and this current layoff marks the third time in his career where he has gone more than a year between fights. He needs to fight at least three times in a year if he wants to make a serious run at the title. People quickly forget about you if you don’t fight at least that often. Evans has only notched three or more fights in a calendar year four times in a 10-year span.

Evans isn’t getting any younger, and if he is to make the move it should be soon. That move will never come, though. Light heavyweight is home for Evans, and it has been for a while now. It’s where he feels comfortable, and it’s where he will stay until he takes up permanent residence in the broadcast booth.