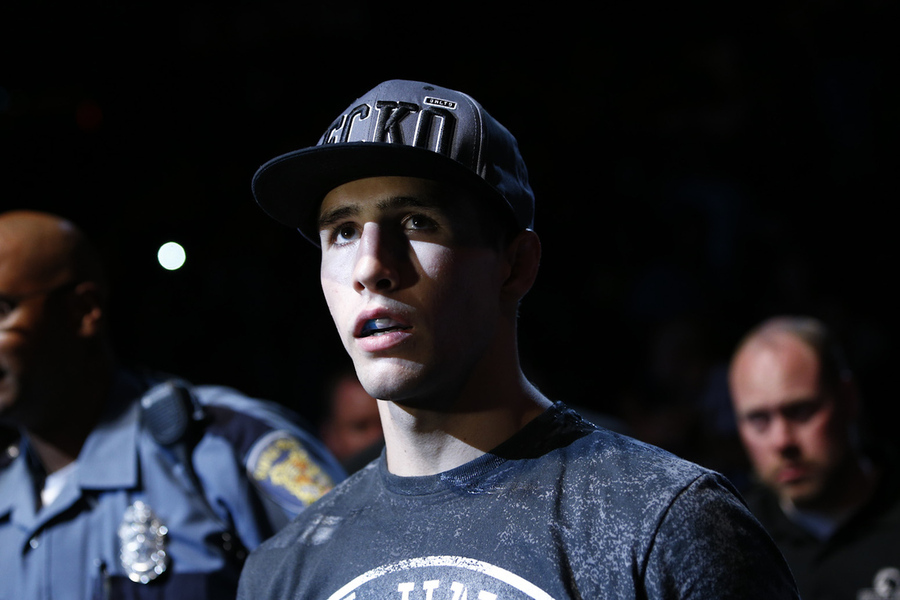 Canadian welterweight Rory MacDonald scored a third-round finish of former Strikeforce champion Tarec Saffiedine to cement his place as a title threat at 170 pounds. In the opening frame both fighters looked to establish their range, trading single shots. Saffiedine tried to throw off MacDonald’s rhythm by switching stances, but MacDonald earned a takedown late to earn the round. Round two saw Saffiedine open up with kicks, but MacDonald kept coming forward. Saffiedine was aggressive to start the third round, shrugging off a takedown attempt from MacDonald and firing off combinations. MacDonald was patient and landed a vicious left uppercut from inside the pocket that dropped Saffiedine. MacDonald followed with heavy shots on the ground, forcing the referee to intervene.

Brazilian bantamweight Raphael Assuncao showed why he’s a top-10 fighter, cruising to a clear-cut decision win over Bryan Caraway. Caraway pushed the action early, but Assuncao countered with outside leg kicks. Caraway looked for takedowns, but Assuncao defended well and scored with counter punches. In round two Caraway managed to score two takedowns, but Assuncao quickly scrambled back to his feet and battered Caraway with strikes. The pace of Caraway slowed in the final round, allowing Assuncao to score a takedown. The Brazilian threatened with a guillotine choke, but Caraway escaped. In the end, Assuncao’s striking was too much for Caraway.

Another TUF winner kept his perfect record intact as Chad Laprise easily controlled Yosdenis Cedeno from the opening bell and claimed a decision win. Laprise scored with leg kicks to open the first and second rounds before scoring with a takedown. Laprise passed to mount and took Cedeno’s back in each round, but he could not find a finish. The third round was primarily spent at striking range, with Laprise again using kicks to slow Cedeno. All three judges gave Laprise all three rounds.

Unbeaten TUF winner Elias Theodorou outlasted Brazilian Bruno Santos and earned a decision win. The first round was sluggish as the fighters spent a large portion of it pressed against the cage. Santos scored two brief takedowns to take the advantage. Theodorou pressed the action in round two, significantly outlanding the Brazilian on the feet with kicks. Santos got Theodorou’s back late in the round, but could not find a finish. Santos started round three with a takedown, but Theodorou powered out and repeatedly put Santos on the mat. Theodorou gained the mount late in the fight and took the back of Santos, but the fight went the distance.

In a grueling fight between TUF alums, Nordine Taleb edged Li Jingliang by split decision. The opening round saw the pair brawl from close quarters. Taleb scored a takedown in the waning seconds of the frame that likely tipped the round in his favor. Round two was more of the same as the fighters peppered one another with strikes. The Chineses fighter earned two takedowns in the frame. In the final stanza, Taleb ended up on top and rode out the fight in the final minutes to convince two of the judges to reward him for his efforts.

Bantamweight Mitch Gagnon made short work of promotional newcomer Roman Salazar. Gagnon sought the takedown early, but Salazar was able to fend it off. Salazar then looked to bring the fight to the mat, but Gagnon reversed the position and quickly took the American’s back. Salazar tried to stand but Gagnon applied the fight-finishing rear-naked choke to earn the victory.

In a battle of striking specialists, it was the wrestling of Daron Cruickshank that was the difference against Anthony Njokuani. Njokuani opened with a thunderous leg kick, but Cruickshank fired back with combinations before securing his first takedown. Cruickshank’s level changes stifled the offense of Njokuani. In round two Cruickshank scored with a spinning backfist and then a big slam. Njokuani seemed perplexed throughout as Cruickshank cruised to the clean sweep on the scorecards.

TUF: Nations runner-up Olivier Aubin-Mercier got back in the win column with a second-round submission of Jake Lindsey. Aubin-Mercier showed improved striking early in the contest, before closing the distance and putting Lindsey on his back. Lindsey showed resolve, getting back to his feet and scoring a takedown of his own. Lindsey scored with nice body shots in round two, but Aubin-Mercier’s ground prowess and judo base proved to be the difference as he secured an inverted triangle choke that coerced a tap from Lindsey.

Lightweight newcomer Paul Felder earned a hard-fought split decision win over Canadian Jason Saggo. The first round was razor-close as Felder scored with heavy strikes, but Saggo put Felder on his back for a large portion of the round. In the second stanza, Felder turned the tides, delivering damage from the top position. The close nature of the bout continued in round three as both fighters secured dominant positions, but could not find a finish. Saggo flurried hard near the final bell, but Felder’s striking prowess was the difference on the scorecards.

Canadian flyweight Chris Kelades overcame the fact he had less than a week to prepare for Patrick Holohan, scoring an upset win by unanimous decision. Holohan came out strong, looking to overwhelm Kelades on the mat with repeated takedowns and a rear-naked choke attempt. Kelades fired back with a big right hand and turned the tides. Kelades took control in round two, moving to mount and battering Holohan from the top. In round three Kelades continued to push the action and outworked Holohan to claim the decision win.

Albert Tumenov needed just one minute to violently dispatch of Canadian Matt Dwyer. Tumenov was undeterred by Dwyer’s height and reach advantage, unleashing a lightning-fast head kick that rocked Dwyer. As Dwyer tried to recover, Tumenov delivered a second kick that put Dwyer out for good, just 63 seconds into the fight.

Former RFA bantamweight champion Pedro Munhoz gave Jerrod Sanders a rude welcome to the bantamweight division, submitting the former Oklahoma State wrestler in under a minute. The Brazilian Munhoz threw a kick early that Sanders caught and looked to turn into a takedown. Sanders left his neck exposed and Munhoz latched onto a guillotine choke and forced a tap in just 39 seconds.