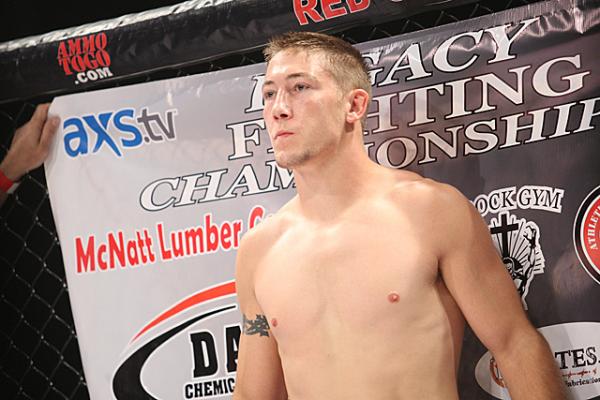 It goes without saying that no fighter enjoys cutting weight before a fight. It was no different for Derrick Krantz when he began his pro mixed martial arts career. Trying to cut weight in order to compete at 155 pounds would leave him, in his words, “on the verge of death.”

“I had no energy,” Krantz said of his weight-cutting troubles while competing at lightweight. He began his amateur MMA career competing at 170 pounds, before dropping down to 155. Krantz has since returned to welterweight, where he is reaping the rewards.

“I feel strong at 170 pounds,” Krantz told Combat Press. “The energy is there and I feel more durable.”

Durability was in demand for Krantz at an early age, since he grew up around combat sports thanks to his father, who was a fan. Krantz participated in karate and kung fu as a kid and wasted no time fancying himself as a fighter.

“I just like to fight,” he said. “I fought after school in parking lots, and an old instructor of mine asked me if I wanted to fight in a MMA bout. I fought a local guy who was well known, and I won. Seeing the audience and getting the adrenalin from the crowd, the whole shebang, pulled me in. I was addicted right away. I never had any intention of doing MMA, and I didn’t find MMA — it found me.”

Krantz began his pro career by winning nine of his first 10 fights, with all but one of those victories ending in a first-round finish. The other victory was also a stoppage, but it ended in the second round. Although Krantz experienced success right away, he had to learn to pace himself as his career evolved.

“I had to teach myself not to give it my all in the first round,” Krantz said. “I tried to finish each fight in the first round, and I would blow my load and gas out. I had to learn to take a slower approach and not force the fight, but to just let it happen.”

Krantz has also faced some of the better-known names in MMA over the course of his career, including the UFC’s Dustin Poirier and Sean Spencer, Bellator’s Andrey Koreshkov and Derek Campos, and veterans Rich Clementi and Brock Larson, whom Krantz defeated in 2015 to win the Legacy Fighting Championships welterweight title.

“It was an accomplishment to know that I could do this,” Krantz said of these fights. “It helps my nerves to know I can be at that level and can hang with those guys.”

But despite an overall record of 19-9, Krantz is not resting on his laurels. He is still working on all aspects of his game.

“Everyone likes to see the stand-up game and knockouts, but once you get on the ground, you can’t move,” Krantz said. “But if you start punching them there, then they can’t move, but you spend a lot of energy. I think it’s better just to pepper them and choke them out.

“I don’t think I’ll ever stop growing. I still work on everything, including the mental training. If I’m mentally there, then I can beat anyone.”

“I liked both organizations and thought it brought something different to the table,” Krantz said. “It’s just big for me to be on TV so people worldwide and my family can watch me. I like how efficient Legacy FC was, and they got better with the more cards they did. And now they’re doing really well after joining with RFA. It was the coming together of my two favorite organizations.

“I really hit it off with the people there. I got to talk to [LFA CEO] Ed Soares, and the people there are easy to talk to, and I got to become friends and create relationships. I try to be friendly with everyone and do what I’m supposed to do.”

But there’s no time for friendship when Krantz faces Ben Neumann, whose record stands at 12-4, for the LFA welterweight title on Friday, May 19.

“He’s a dangerous opponent, and he’s unorthodox,” said Krantz. “They think Ben is good enough for the title, so I’m not taking him lightly.”

Krantz believes that if he keeps fighting better opponents and winning those fights, it’s only a matter of time before he’s considered the top welterweight in the world.

“I want people to know my name, and I also want to set a good example for my kids,” Krantz said. “I want to take it to the next level. I think I put in enough time, and I just take it one fight at a time also. I hope they keep feeding me guys so this can become an actual career for me. I also work as a foreman in construction, and I got a good wife who helps me out a lot and pulls more weight with our house and kids.”