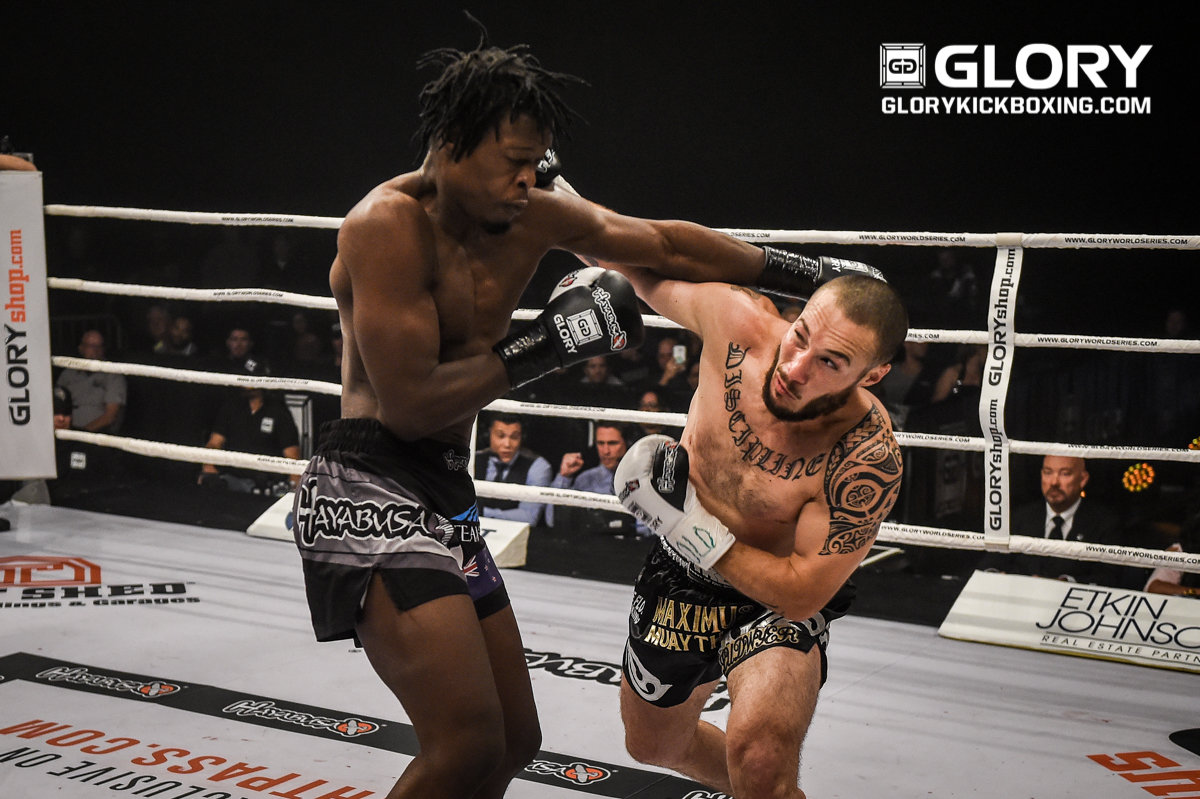 GLORY 38’s Richard Abraham: ‘I Fight Because I Love It’

Pulling up to Fusion Fitness & MMA on a chilly February evening, one thing is immediately clear upon arrival. The sweat-stained windows of the gym let everyone know that athletes are putting in serious work behind closed doors. Chief among them is GLORY welterweight Richard Abraham.

The fighter is far from the biggest or tallest fighter in the gym. At first glance, one would think he’s there to join others in a weekly class going over drills. However, it only takes a few moments for those standing by the entrance to greet Abraham as their conquering hero. It’s a familiar feeling for the Chicagoland native. Abraham is from nearby Itasca and enjoyed the chance to fight in front of his hometown fans the last time GLORY came to the Second City.

“It was electric,” Abraham told Combat Press. “I couldn’t believe in just four weeks we sold over 300 tickets. It was surreal hearing people chant my name.”

How Abraham ended up in the middle of a GLORY ring with rabid fans chanting his name is a tale that sounds like something more from Final Destination than real life.

“God works in mysterious ways,” said Abraham. “I had my ticket to Thailand booked and was set to fight out there. Then, all of a sudden, I get a call from GLORY offering me a fight here. I asked who it was, and they said Paweł Jędrzejczyk, a five-time world champion. Of course it sparked my interest, because I’m interested in fighting the best guys.

“I took the fight and wound up losing my ticket money, but the stadium in Thailand ended up catching on fire. It was a bizarre chain of events of how I got to where I’m supposed to be.”

Fighting the best guys in the sport is certainly nothing new to Abraham. Although he doesn’t have as much experience as some of his GLORY counterparts, Abraham has fought some of the sport’s biggest names. That includes current Lion Fights champion Jo Nattawut.

“It was when I was first coming on the scene,” Abraham said of fighting the Muay Thai champion. “I had fought a few times in Thailand. Lion Fights was talking to me, and I told them I don’t care who it is, I’m a fighter. They said, ‘Well, we have Jo Nattawut,’ and I was like I don’t care, I’ll fight Jo. Even though I hadn’t fought at that weight, I still made the cut because I love this sport. I don’t fight for money; I fight because I love it.”

The love Abraham has for fighting is clear to see when watching the man compete inside the GLORY ring. Whereas some fighters may take some time to look for an opponent’s weakness or sit back and counter, Abraham moves forward like an unstoppable hurricane. His aggression has made him a fan-favorite in the GLORY welterweight division.

“I’ve always trained like that,” Abraham said of his aggressive style. “That’s part of the reason I credit for how I got here. I train hard and don’t throw any light shit. My coach [Mike Valle] told me, ‘Everyone gets tired, [but] champions know how to push through it.’”

Valle has given Abraham the tools to succeed with the gloves, but it’s Abraham’s father that left a lasting imprint on the mental game of the GLORY contender.

“When we were growing up, my dad bought us a pair of 16-ounce TKO gloves and threw them to us,” recalled Abraham. “He said, ‘Put these on and be a man. Don’t use any weapons.’ Ever since then, it’s been stuck in my head.”

Antoine Pinto is looking to stop Abraham’s aggressive climb up the welterweight rankings. Only 26 years of age, Pinto has already taken part in well over 100 recorded fights. Abraham will be in familiar territory as the fighter with less experience. Both men are riding impressive winning streaks. Abraham sports a 4-0 record inside the GLORY ring. Meanwhile, Pinto is in the midst of a five-fight winning streak. Abraham’s fight against Pinto serves as the co-headliner of the GLORY 38 main card, which begins 10:30 p.m. ET on ESPN3.

“My path is to just be me and outworking him,” Abraham said. “It’s finding a will to win. I know his brother just got knocked out, and he feels like he has something to prove. He has a big name and has accomplished a lot in Muay Thai. I’m happy for the guy. People keep asking me why don’t I say negative things about him, because he is saying negative things about me. That stuff doesn’t really matter to me. Antoine Pinto is just a guy fighting me. He isn’t part of my family. He’s not paying my bills. He’s just someone standing across from me. And as soon as that bell rings, we’re going to try and hurt each other.”