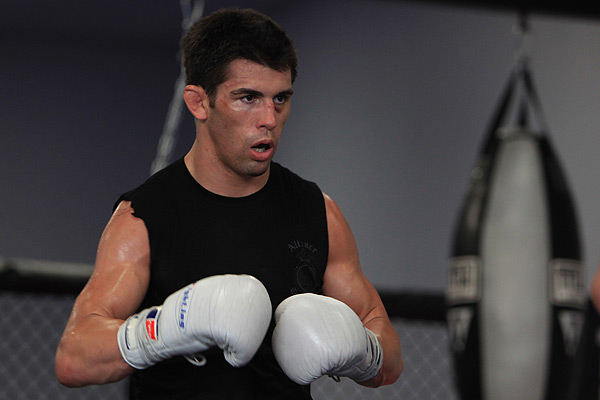 Could 16 Be the Lucky Number of UFC Fight Night 81’s Dominick Cruz?

When the WEC merged with the UFC in October 2010, a huge opportunity arose for the fighters in the lighter weight classes to make their mark and become household names. One of those fighters was Dominick Cruz, the reigning WEC bantamweight champion at the time.

Cruz won his title at WEC 47 when he defeated Brian Bowles by TKO. He went on to defend his belt against Joseph Benavidez and Scott Jorgensen before being promoted to the UFC roster, where he was immediately crowned as the promotion’s bantamweight champion. His first title defense came at UFC 132 against the man who had given Cruz the only blemish on his record, Urijah Faber. Cruz successfully defended his title against Faber and went on to defend it against current UFC flyweight champion Demetrious Johnson. Shortly thereafter, it was announced that Cruz and Faber would have a rubber match after coaching The Ultimate Fighter: Live.

Unfortunately, Cruz would have to pull out due to injury and, after 16 months of inactivity, he was eventually stripped of his title.

Renan Barão, who had captured the interim bantamweight title in Cruz’s absence, was then promoted to the status of undisputed champion. His first title defense came against the aforementioned Faber at UFC 169. Barão successfully defended his title against Faber before meeting T.J. Dillashaw at UFC 173. In what has been called one of the biggest upsets in recent UFC history, Barão was stopped in the fifth and final round and Dillashaw was crowned the new bantamweight champ.

The division was in the middle of major changes. Four short months later, another challenger would make his argument for a crack at the title: Cruz.

It would be almost three years before fans saw Cruz back inside the Octagon. Many wondered what shape the former champion would be in and if the infamous ring rust would be a factor. Cruz didn’t need long to answer the doubters. He obliterated Takeya Mizugaki at UFC 178 in just over a minute, gaining the first knockout victory of his career. This victory was enough to warrant a shot against the aforementioned Dillashaw. However, before the two were able to meet, Dillashaw defended his title against Barão at UFC on Fox: Dillashaw vs. Barão 2. Dillashaw was again successful and finally, 16 months later (ironically enough), Cruz is getting his chance to reclaim what he never really lost.

Now, almost two years to the day, Cruz will look to capture the championship belt and show everyone that he is truly back. The most interesting aspect of this match-up has to be the similarity in footwork. Dillashaw’s footwork has been compared to Cruz’s footwork many times.

For Dillashaw, it’s a chance to gain one of the biggest wins of his career against easily his highest-profile opponent to date and silence all those who doubt his legitimacy as champion.

The stakes are much higher for Cruz. He will be looking to prove, not unlike Dillashaw had to, that his win was not just a fluke.

To play dream matchmaker with the division, let’s say Cruz is able to reclaim the belt. It would be hard to imagine the UFC not trying to book the rubber match with Faber and end the animosity and questions once and for all. If Dillashaw is victorious and retains his title, the bad blood between Dillashaw and his former training partner and mentor Faber puts the pair on a collision course.

Really, in the end, the biggest winner from Sunday’s title fight could actually be Faber. Either way, the fans will be get what they want.