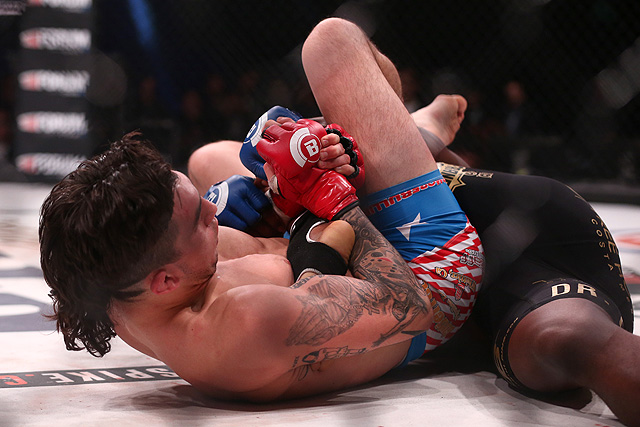 The show, which continues on its home on ESPN+, aims to give top prospects a chance to impress the UFC brass in an attempt to earn a contract with the company. The show’s fourth episode of the new season takes place on Sept. 21 and streams live at 8 p.m. ET.

This episode of the Contender Series is a little bit shorter on talent than some of the cards that preceded it, but AJ Dobson looks to be the standout prospect to watch on this episode. Dobson is a good, well-rounded fighter, but it’s his striking that is his standout attribute. Three of his wins come by way of knockout, including his biggest win over former prospect and Contender Series vet Kailan Hill. He’s definitely the guy to have in the main event of this card.

Speaking of that main event, the Dobson-Arkhagha bout is definitely the fight to watch. This is based on the excitement factor, as both Dobson and Arkhagha love to strike. This will basically be a kickboxing match with MMA gloves. Both guys have big power and are head hunters, which is why this bout will be a firefight. Definitely keep your eyes on this one.

On late notice, CFFC vet Santo Curatolo gets an opportunity on the Contender Series and he’s a true dark horse on this episode. He’s an absolute brute of a human being and it’s almost shocking he can make 125 pounds with how muscular and thick he is. He’s insanely powerful, which has been seen in his five knockouts and his powerful submission win. He takes on Kleydson Rodrigues, a Nogueira brothers student, so he will likely avoid long-term ground exchanges, even though his wrestling is solid.

There are a couple long shots on this episode, but I think Contender Series vet Jacob Rosales seems to be the guy with the tallest mountain to climb. He has a 68% win percentage as a pro MMA fighter, and while his losses do come to respectable fighters like UFC roster member Jonathan Pearce, UFC vet Justin Jaynes and Bellator roster member Bryce Logan, those fights show that he’s not ready to break out at the next level. Plus, he’s 2-2 in his last four fights, so he’ll have to do something very impressive to earn a contract.

There’s a lot of fighters here that need more seasoning and likely won’t be signed with a win, unless they do something crazy. The three that get the nod on this night will be Dobson, Veretennikov and Curatolo. Dobson puts in a typical impressive performance, which earns him the contract. Veretennikov got this spot because of Dana White: Looking for a Fight, so this will be the second time he fights in front of the boss. That gets him a shot. And Curatolo is a horse in a flyweight division that needs bodies.