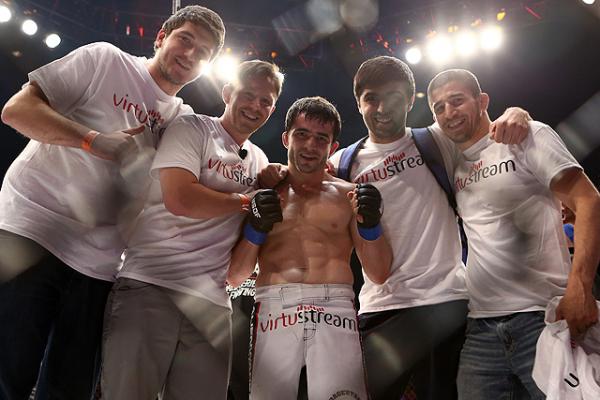 For the second straight year, Illinois fighter Askar Askar is a part of this series, albeit his appearance this year comes as a bantamweight. The Midwest Training Center product is tough and skilled. At 25 years old, his best days are still ahead of him.

Askar has solid striking and a strong ground game. He has effective takedowns, uses transitions well to get to an advantageous position, and smashes opponents with ground-and-pound. He also has a great submission set, which helps him finish fights. He had a couple of scrapped fights in 2019, which made the year a slow one for him. However, he did score a rear-naked choke victory in October.

Despite his recent inactivity, Askar is still a top 135-pounder with a bright future in the sport. Many regional fighters don’t want to fight this guy because he is so skilled. The UFC should step up here and put him in its bantamweight division, where he could potentially rise to become a part of the top 15 within a couple of years.

You’d be hard up to find a fighter in pro MMA, given the differing stylistic match-ups, that is undefeated through 20 fights but has not built his record exclusively on fighting scrubs. Luxembourg-born Russian Khusein Askhabov, 24, has done so, proving himself to be among the top bantamweight prospects in the world.

The Tiger Muay Thai export has a problem finding fights, and for good reason. Many potential foes in the European and Russian regional scenes don’t want to risk extending their wait on a UFC or Bellator career by fighting a guy of this caliber. As a teenager, Askhabov built up his record by fighting similarly inexperienced fighters, gaining needed experience along the way. In doing so, he showed off his impressive grappling and striking skills. However, starting in 2014, he began accepting fights with more credible opponents, whom he continued to defeat handily.

In 2019, he fought just once. The contest ended in a guillotine choke of Luiz Filho. Askhabov continues to get better. He has many years ahead of him, which is scary given the amount of fights he’s already taken. With few regional fighters willing to step into the cage with him, he needs the opportunities that would come in the UFC against the best the world has to offer.

For many years, it’s been puzzling that the UFC has not inked veteran Victor Henry. He’s a very talented fighter who has fought a number of respected opponents with a great success rate. This year, we’re including him on this list as a fighter the UFC needs to sign. He would be an immediate contender in the bantamweight division.

The UWF USA representative is an explosive catch wrestler known for his great takedowns, transitions, and finishing ability. He’s also a very good striker, making him quite the well-rounded competitor. That’s why it’s shocking that neither the UFC nor Bellator has inked this guy to a contract. Henry has not lost since 2017. In that time, he has gone 7-0 with four finishes. Those finishes include a front kick to the body and a reverse triangle choke. He scored three wins in 2019, with a decision over Yuki Motoya, a knockout of Nikita Chistyakov, and a submission of Trent Girdham via the aforementioned reverse triangle choke.

Henry should be considered more than just a typical prospect at this point. He should be a top priority for the UFC. He’s 32 years old, but clearly, based on his performances, he’s approaching his prime. Now is the time for the UFC to pull the trigger on this guy.

Hey look, another Nurmagomedov! Unsurprisingly, he’s a very good Nurmagomedov with an impressive undefeated record at 12-0. Umar is possibly the top prospect in the family right now. He’s been beyond dominant and looks to continue his outstanding cage work into 2020.

Umar, like his cousin and UFC champion Khabib, is an outstanding wrestler. He is suffocating on the mat and has good submission skills. He’s not a bad striker either, which helps him to set up his takedowns more effectively. He went on an absolute tear in 2019, running through four opponents with two rear-naked choke wins (Brian Gonzalez, Taras Grytskiv) and two unanimous decisions (Sidemar Honorio and Wagner Lima). Umar is ready for the big time.

One of the Eagles MMA product’s wins came under the Professional Fighters League’s banner, so perhaps he will want to participate in the organization’s 2020 season. However, the UFC needs to get this guy signed up immediately. He’d be a bantamweight contender in no time.

Russia’s Timur Valiev makes his second — and final — appearance in this series. The Jackson-Wink fighter remains outside of the UFC, which is quite baffling. Not only is he consistently one of the best guys at both 135 and 145 pounds, but he moved to Jackson-Winkeljohn MMA to improve his game and garner more notice from the UFC. Despite consistently proving he can hang with top-level talent, the UFC has shockingly not pulled the trigger on this prospect.

Valiev is no one-trick pony. He has high-level striking abilities and great kickboxing skills. He is also fully capable on the ground. Valiev has a strong submission game to go with his precise, violent striking attack. The PFL has given him some fights, but he seems unwilling to commit to a full season with the company, preferring instead to wait on the UFC. In 2019, he secured two victories. He destroyed The Ultimate Fighter: Brazil veteran Giovanni da Silva with strikes in under four minutes and decisioned Taigro Costa.

Valiev has consistently offered to step in on late notice for the UFC at both featherweight and bantamweight. He is hungry and ready to show the UFC that he’s a guy who could quickly become a contender. Whatever the hold-up may be, the UFC needs to get past it and add Valiev to the roster. He’s too good to be wasting away on the Russian regional scene.