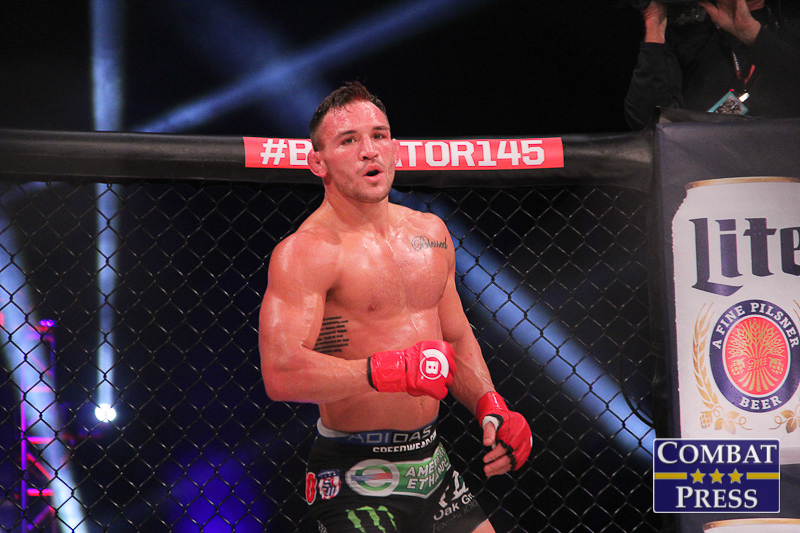 Three Fights To Help Us Forget Bellator 155 Ever Happened

Unpredictability. It’s what keeps our eyes focused on that car in the next lane that keeps drifting across the white line. It’s what keeps us looking over our shoulder when we hear footsteps while walking down a poorly lit street in the wee hours of the night. It is what makes MMA the most exciting sport that exists today.

In the MMA world, though, sometimes exciting gets left out of the equation. In turn, that can leave a bad taste in the mouths of the fans. This was the case for Bellator 155.

On paper, the event was sure to feature a striking exhibition between two feared men from Bellator’s middleweight division. Those men were newly crowned champion Rafael Carvalho and knockout artist and feared kickboxer Melvin Manhoef. It was a fight that Manhoef did not seemingly deserve after going 2-1 with one no-contest since joining Bellator’s ranks. It was widely believed that the man that Manhoef had most recently defeated, Hisaki Kato, was to be next in line for the belt had he defeated Manhoef. Manhoef derailed Kato’s rise, though, and claimed the title bid for himself instead. So, of course, Manhoef, with 28 of his 30 wins coming by way of knockout, was going to make this an exciting war for the title, right?

This fight had fans and critics alike appalled at the lack of excitement. Carvalho didn’t even land a single strike in the first frame — yet, the judges still gave him the edge for cage control — and the men often stood in front of each other while feinting punches, but not throwing any. It turned into a controversial split decision win for Carvalho, which capped off an “off night” for the world of MMA. Alongside a draw between heavyweights Augusto Sakai and Dan Charles following some repeated low blows, the controversial finish to the headliner was enough to turn Bellator 155 into an event many fans would just as soon forget.

So, how does Bellator rocket back from such a disaster? It’s simple. The company has to book some fights that bring eyes to the brand. Here are a handful of pairings that Bellator fans need to watch in order to “reformat” their minds and therefore erase the debacle that was last weekend.

With the abrupt departure of Bellator lightweight champion Will Brooks to the free-agent market, Bellator wasted no time in announcing who would fight for the vacant title. It will be none other than former lightweight champ Michael Chandler and the man who’s coming up on his first title shot, Patricky “Pitbull” Freire.

Just over five years ago, these men battled it out at Bellator 44. The fight propelled Chandler into his unforgettable title upset of the reigning champion of the moment Eddie Alvarez, who is now preparing for a title challenge of his own in the UFC. Since their first affair, a lot has changed for Chandler and Freire.

Chandler went on to defeat the likes of Rick Hawn, Akihiro Gono and David Rickels before an eventual rematch with the aforementioned Alvarez at Bellator 106. Chandler lost his belt to Alvarez and ended up coming up short in capturing the interim title from Brooks. It was the worst skid of Chandler’s entire career. However, Chandler has since bounced back, rattling off impressive wins against Derek Campos and Rickels for a second time. It only seemed logical that Bellator would give him another crack at being the face of the promotion’s lightweight division.

Pitbull, just like his opponent, has been through some ups and downs since their first fight. After rebounding from his Chandler loss with a win over former UFC fighter Kurt Pellegrino, Pitbull suffered through a three-fight skid. He put together another winning streak, with notable victories over the aforementioned Rickels and Campos before running into Marcin Held at Bellator 126. The loss to Held was just a temporary setback, and Freire bounced back with a win over Saad Awad just over a year later. Pitbull’s luck turned again when he wound up going 2-1 in his next three fights with a loss to Derek Anderson and wins over Ryan Couture and Kevin Souza.

It’s interesting that Bellator opted to book Pitbull against Chandler for belt. There are a few other fighters that could have matched up better with Chandler, but Bellator is going for the grudge match. It will force these fighters to prove that they are not the same men they were five years ago.

Combat Press writer Justyn Likes recently broke the news that Rickels and Melvin Guillard will fight at Bellator 159 on July 22.

When it comes down to it, Guillard is in a bigger must-win situation than he has ever been in before. If the UFC veteran loses this fight, he really has nowhere to go. He’s already on a two-fight skid in Bellator and has already been released from the UFC and the World Series of Fighting. Guillard may have a chance with Venator FC, since the Italian-based promotion does seem to be scooping up former big names, but that’s the limit of Guillard’s future if he can’t find the win column against Rickels.

This fight plays into the strengths of Rickels, as well as playing into his ability to please the crowd. “The Caveman” has never been in a boring fight, whether he is victorious or laid out on the canvas. Either way, this fight is a win-win not only for the fans, but for the fighters as well. Guillard gets a chance to prove he is still relevant, while Rickels has the chance to add a huge name to the list of fighters that he has put away.

If Rickels wins, it puts him right back into title contention, too. Meanwhile, the two men vying for the belt are both men who hold victories over “The Caveman.”

If you have not watched a Liam McGeary fight, then you are doing yourself a huge disservice. McGeary, like former UFC light heavyweight champion Jon Jones, is a tall, lanky and dangerous fighter. He burst into the Bellator scene and needed just under 90 seconds to dispatch of his first opponent. He went on to finish his next five opponents, all in the first round, including an inverted triangle choke of Kelly Anundson, before earning his shot at Emanuel Newton, the reigning champion of the moment. While it didn’t end with a McGeary highlight-reel finish, McGeary’s performance against Newton was enough to prove that he was a top-echelon fighter that deserved recognition. McGeary went back to his finishing ways in his first title defense, defeating former UFC champion Tito Ortiz with yet another inverted triangle choke in the first round. It seems only logical that he would be on a crash course with Phil Davis, another UFC veteran.

Davis, instead of re-signing with the UFC after his loss to Ryan Bader, decided to test the free-agency market and eventually signed with Bellator and entered the organization’s four-man, one-night tournament. Davis dispatched of both the aforementioned Newton and another former UFC standout, Francis Carmont. The stars didn’t quite align for Davis to get a shot at the title, though, and he was matched up with the man he should have fought in the tournament final, Muhammed “King Mo” Lawal. The two met at Bellator 154 a couple of weeks ago. The fight was widely scored in favor of Lawal, but the judges weren’t watching the same fight and Davis was given the unanimous nod. The win sets him up for his long-awaited title shot.

Davis is a stiff test for McGeary. He will be the strongest wrestler that the champ has faced, and he also has some decent striking abilities. The difference is McGeary’s length and incredible jiu-jitsu on the ground. It will be a fight to watch to determine if Davis made the right decision in coming to Bellator, or if McGeary is going to make Davis regret his choice.

Daniel Straus vs. anyone

This is a bonus fight added to this list for a few reasons.

Daniel Straus is a two-time Bellator featherweight champion, most recently capturing the belt from Patricio “Pitbull” Freire, the man who took it from him originally. It was one of the most exciting fights that Bellator has showcased. Straus was able to outwork and outclass the former champion. He has held the belt twice in the past three years and is currently mending a broken hand that he suffered in the first round of his title winning bid. The only losses Straus has suffered inside the Bellator cage have come to the aforementioned Freire on two occasions and former featherweight champion and recent Bellator 155 winner Pat Curran.

Bellator’s featherweight division is still the company’s most competitive weight class. There are plenty of challengers waiting to take on Straus. Could the fans see Curran-Straus IV? Or maybe Pitbull-Straus IV? It may be odd to see a fourth bout take place between two fighters, but it’s one pairing that Bellator could easily sell given the exciting contests that have occurred between Straus and his rivals.

Bellator could easily shy away from rematches, though, and pit Straus against guys like Daniel Weichel, who, had he had five more seconds, could be champion today instead of Straus. Or Georgi Karakhanyan. Even though Karakhanyan has losses to Curran and Weichel, he is still a formidable opponent. The list also includes Bubba Jenkins, Goiti Yamauchi and Emmanuel Sanchez. Regardless of the match-up, the fans will most certainly win when Straus fights.