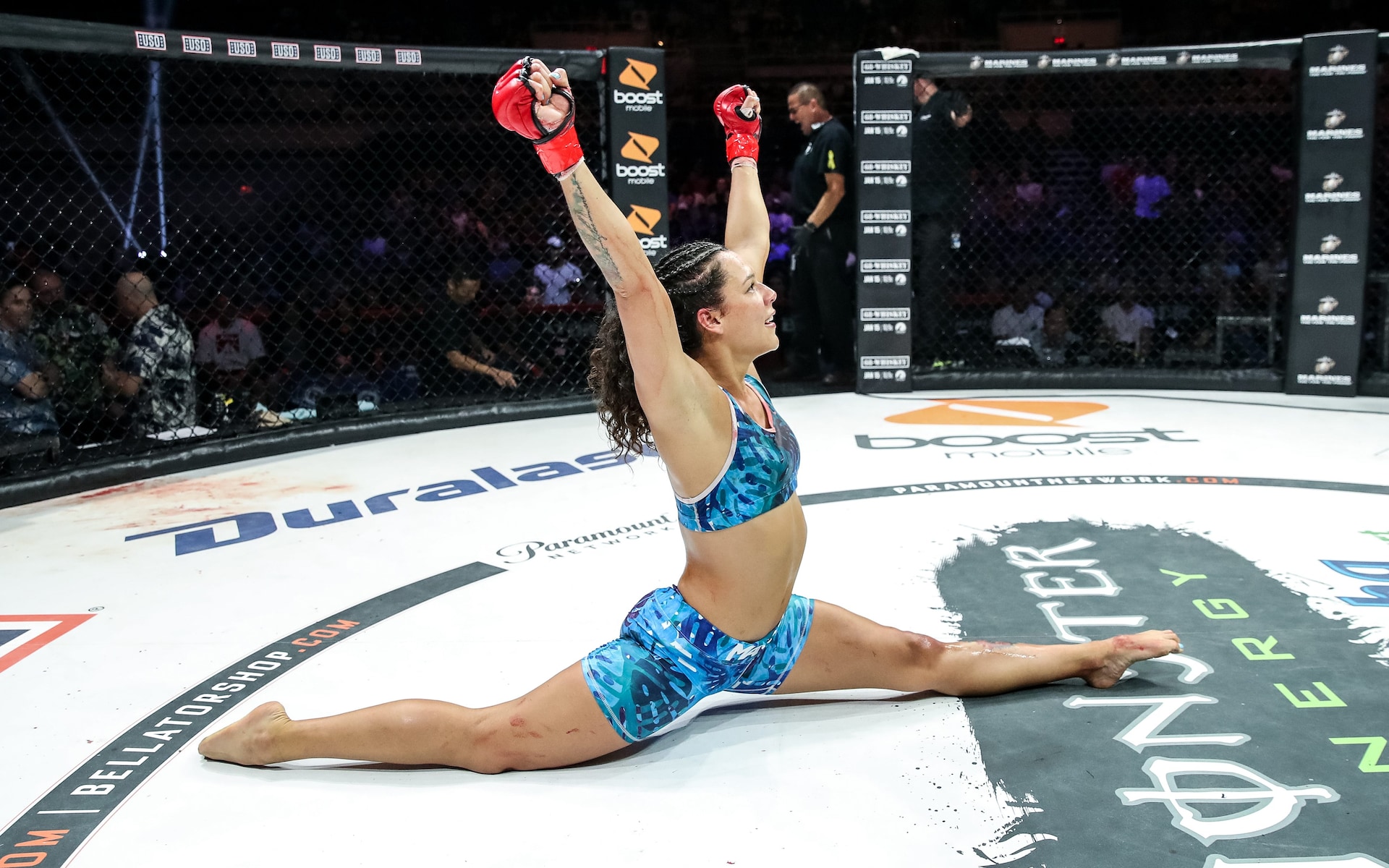 There’s not a UFC event this weekend. In addition, there aren’t a whole lot of female bouts in general. However, there are a couple: Bellator 255 features Kana Watanabe and Alejandra Lara, while Mountain Force MMA 24 hosts Brooke Mayo and Akeela Al-Hameed. Let’s take a look at these fights.

Watanabe enters at 9-0-1, while Lara sits at 9-3 after a really impressive win over Veta Arteaga.

I am so high on Watanabe’s potential. If she gets her striking up to the level where it needs to be, then she has championship potential. The knock against her has been her strength of schedule. She has had a lot of opponents who were very much below her level of experience. However, in her last fight in December 2019, she notched a third-round stoppage of Ilara Joanne to answer the question of what she can do against tougher opposition.

Striking is definitely Watanabe’s weak area. That is going to be problematic for her here, because she is facing someone who has, by design, a very awkward striking style. Watanabe can be hesitant to throw, and she will leave her head centered. When she does throw, she is slow to get her hands back up. These are all bad things in this fight that hopefully she has spent time working on.

Watanabe surely does not want to get into any wild exchanges with Lara. She is not going to win those and will more than likely provide Lara with opportunities to really hurt her. I would like to see Watanabe utilize kicks. Using them early can perhaps slow down the aggression of Lara, who likes to punch into clinches.

While Watanabe won’t want those lengthy exchanges, she should not shy away from them. When she sees Lara punching and moving forward, Watanabe can take a few steps back to the cage and let Lara initiate the clinch. Why? There are a variety of reasons, really.

First, Watanabe is very strong. She incorporates a lot of weight training into her routine. This means she should be the stronger fighter in the clinch and can dictate things. Lara, while a good striker in the clinch, leaves her body somewhat open, and Watanabe can perhaps take advantage of this to do some damage there.

Mainly, however, this is where Watanabe can get the takedowns. She has some really nice judo accomplishments, and her takedowns can be really good. She doesn’t have to rely on traditional takedowns, either. She is good at hooking an arm and using leverage to get her opponent down.

Watanabe has really good ground-and-pound. She makes slight little position adjustments to enable those ground strikes. She also is good at applying pressure, such as putting her shoulder on the neck to distract from what she is really trying to do.

Watanabe shouldn’t try to get it down right away, though. If she goes to it too early, then she’s really going to give away what she is trying to do. This would then allow Lara to be prepared and take the steps to avoid it as the fight goes on.

Lara should be able to control the stand-up battle. It is in her best interest to keep it there, too. She will have a nice little reach advantage as well. Lara is aggressive, which is good, but she doesn’t want to be overly aggressive. Watanabe, as someone who keeps her head centered, will allow Lara to have success with some basic combos, such as a jab-jab-cross.

Lara can have success on the ground, but she does not want to be on bottom. If she senses the takedown coming, then she has to try to position herself to land on top. Watanabe won’t be afraid of the bottom position, whereas Lara will be better off on top. Lara can do damage from the top. On bottom, though, she should focus on controlling Watanabe’s hands and avoiding ground-and-pound.

Fans should go out of their way to watch this fight. I can’t imagine it not being incredibly fun.

OK, so, why should you care about an outing between an 0-2 fighter and an 0-1 fighter? Well, because they are both much better than those records suggest. This could be a really exciting fight, too. We have a great grappler in Mayo against a great striker in Al-Hameed, which means this is a pretty easy one to break down. It’s going to be a case of two fighters wanting very different things, and it’s really just about how they can get the fight into their world and keep it there.

Mayo suffered her two losses in the Bellator cage. That was a long time ago, though. This will be her first fight since September 2017. After previously fighting at flyweight, she is no longer interested in cutting weight. She returns two classes higher at featherweight. Al-Hameed has been away from action for a long time as well. Her last fight took place in January 2018, when she lost to Felicia Spencer in the Invicta cage.

Despite moving up in weight to fight against someone who is probably cutting to get down to 145 pounds, it isn’t out of the question that Mayo performs better at this weight. Perhaps not cutting will make her stronger, leave her with more energy, and allow her to feel more confident.

Of course, Mayo wants it on the ground. How does she get it there? Mayo throws really nice high kicks. She doesn’t throw them recklessly just to throw them. They always have a real purpose and usually hit their target. Al-Hameed, while she has great movement, might circle right into those kicks.

On the negative side, Mayo can be hit. She really doesn’t want a boxing or kickboxing match. However, those high kicks can keep Al-Hameed at bay until Mayo figures out her entry for clinches and takedowns.

Eventually, Mayo’s going to want the clinch. She is very good on the outside, where she can control an opponent and be patient in waiting for the takedown. Al-Hameed is really good at preventing takedowns, but she can be controlled in the clinch. This means Mayo’s patience is key. Once she gets the clinch, there is no need to rush. She should be able to hold Al-Hameed there. Whether Mayo opts for a trip, a double leg, or whatever, it all rests on her patience. Meanwhile, Mayo can also mix some strikes.

If Mayo is in trouble on the feet, then she might even pull guard. Do you want someone with Al-Hameed’s power on top of you? Not really. However, Mayo is so good off her back, and her guard game is outstanding. She will be more dangerous off her back than Al-Hameed is on top of her. Once the fight is on the ground, Mayo will have so many options available to her to try to finish the fight.

Al-Hameed wants to stay on the feet in her fights. She has great boxing and even had Spencer backing up and taking damage. Her movement is great, both with her head and feet. She has power and throws nice combos.

Al-Hameed will want to be very aggressive on the feet. She’ll want to move forward, throw the proverbial “punches in bunches,” and not let Mayo get going. If she really pressures Mayo, then it will likely pay off in a big way. By being aggressive and not circling on the outside, this also limits the chances of running into one of those high kicks, because Mayo won’t have the space to throw them.

Mayo is durable. She’s not done until she’s done. Al-Hammed can’t get cocky in thinking she has the finish before the ref calls it. She also has to be aware of the shot, as Mayo might look to come low on her if she is coming forward. Al-Hammed must be prepared to sprawl.

If Mayo gets the clinch, Al-Hameed should look to try to get an underhook and use her strength to turn Mayo. While the clinch isn’t the best place for Al-Hameed, she is very good at it when she is on the outside.

The ground is the one place Al-Hameed will absolutely want to avoid. If she gets taken down, she can’t get in a grappling match with Mayo. Mayo will be very happy with that. If your opponent is happy that you are doing something, then it means you shouldn’t be doing it. Al-Hameed has to look for ways to get up, whether that means getting her back to the cage, kicking Mayo off, or stalling to get a stand-up.