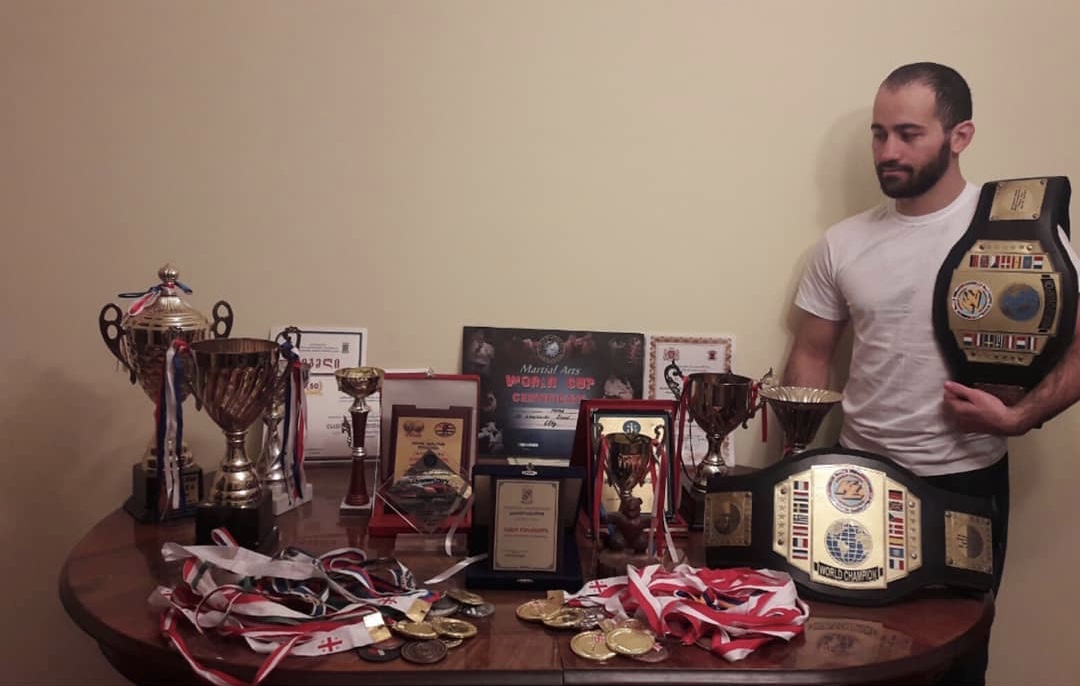 The above stats pretty much sum up the professional career of 28-year-old Georgian mixed martial artist Zviad Lazishvili. Pretty impressive, right? The craziest part is that he hasn’t seen the inside of a cage in four and a half years.

“After 2015, I decided to take care of my business,” Lazishvili told Combat Press. “I took some time off and moved to Moscow, where I signed with Strela promotion. I had four fight camps, and, unfortunately, four of them were canceled in fight weeks due to my opponents’ injuries. Then, I got injured and had to do surgery. It took a long time to recover and then I moved to the [United States] and needed some time to get back to shape.”

From May to June of 2015, Lazishvili fought three times before he started facing this series of setbacks. However, it was not the first time he had faced adversity in his life.

“I grew up in a small town called Kobuleti in the Republic of Georgia,” Lazishvili said. “It’s a very beautiful city with a mixture of mountains and sea. In my childhood, unfortunately, the crime rate was high, and I was basically fighting every day in the street. I guess I had developed some fighting skills, and, later, when I started training seriously, it helped me to learn everything very fast. Despite those bad parts, I remember my childhood as the happiest time. I had a chance to learn so many things and got lifetime experience in a very short time with my big and amazing family.”

Lazishvili grew up in a wrestling family and might have done a lot of fighting without actual training. As he got older, he decided to formally learn the crafts that he had already grown accustomed to through the school of hard knocks. At age 19, he started down his current path.

“I officially started training combat sports in order to learn self-defense,” Lazishvili explained. “I was very lucky that I was surrounded by a couple of professional fighters since the beginning, and I got hooked on MMA. I became obsessed with MMA, because it was of diverse emotions and feelings, and I loved the fact that I could learn multiple combat sports. I can say that MMA changed my life in so many different aspects. It taught me to be more calm, patient, and focused in everything that I do. I will never back down until I achieve my goal.”

Lazishvili currently trains at Kaizen MMA in Virginia under the tutelage of Nima Mazhari, Najim Wali, Toney Waldecker and Gustavo Tutera. He was more than ready to get back in the cage this fall. He was scheduled to face veteran Josh Huber at a Legacy Fighting Alliance card in Broomfield, Colo. However, a week before the event, things got postponed. The LFA’s broadcast partner, AXS TV, had come under new ownership and abruptly ended its relationship with the organization. The LFA had to delay a couple of events, but the promotion is now back on its feet with UFC Fight Pass. The show — LFA’s 79th event — will go on this Friday night at the 1STBANK Center in Broomfield.

“I found out about Josh around three months ago,” Lazishvili said. “He is very experienced and a tough fighter with a warrior’s heart, which excites me a lot. I think our fight will be very interesting. He is a more steady and durable fighter, but, on the other hand, he has no explosiveness. But he is very smart and knows when to do what, which makes him a pretty dangerous opponent. Every fighter has some weaknesses, and I am going to use those holes against him to get my victory.”

Lazishvili has a solid game to back up his confidence, and his team is full of killer training partners. However, both his hometown of Kobuleti and his current home gym in Falls Church, Va., sit near sea level. This does not bode well for conditioning to fight at altitude in the Denver area. So, the Georgian fighter has spent the latter part of his training camp in the Mile High City.

“My coaches allow me to train in different places, which helps me get a lot of experience,” Lazishvili said. “For this particular fight, I did my fight camp in Denver with the Elevation Fight Team under [UFC veteran] Cody Donovan. This place is one of the best gyms I have ever been to — very hospitable and knowledgeable people. I had an opportunity to train with Cory Sandhagen, Alistair Overeem, Austin Hubbard, Arut Pogosjan, Cory Galloway, Justin Wetzell, Jota Ninomiya and so many other great fighters.”

The Elevation Fight Team and Huber’s team at Factory X Muay Thai are the two biggest and baddest camps in Colorado. Both crews often face each other in the cage, so it’s fitting that Lazishvili would train with Elevation to prepare to fight Huber, who is coming in on an eight-fight winning streak, two of which were striking-only matches as part of a one-night tournament. This might seem like a daunting opponent for most guys who are getting off the bench for the first time in five years, but Lazishvili is young, talented, and confident he will taste victory.

“I don’t like to predict the fight, because MMA is a very unpredictable sport,” Lazishvili admitted. “One mistake can change everything. I have not fought for five years, and I really want to fight the whole three rounds and taste blood and all the mixed feelings which comes with a fight.”

Lazishvili’s goal for the next 12 months is quite clear. He wants to fight as much as possible and get into the UFC. Barring any additional adversity, a win over Huber should get him on the fast track to realizing this goal. On Friday night, fans can watch Lazishvili’s fight on UFC Fight Pass in the co-main event of LFA 79.

“I would say one thing,” Lazishvili stated. “It’s never too late, and nothing is impossible if you have the desire and you are streaming for something. I have been in this sport since 2012, but around five years I was out of MMA. I still managed to accomplish some things in this very short time, and I’m still trying to follow my dream no matter how difficult life is. I will never back down on my goals and dreams. I am just a country boy with a hunger to learn and explore as many things as I can.”