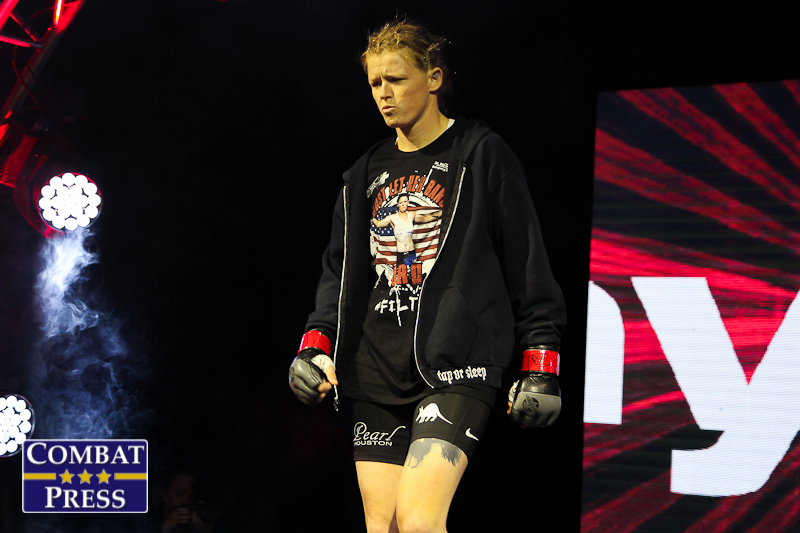 Walk to the cage.

For the last few years, this had been Invicta FC bantamweight titleholder Tonya Evinger’s checklist for a fight, and all the boxes had been ticked.

At Invicta FC 20, however, this was not the case. In a wild string of events fueled by incompetent refereeing, Evinger found herself on the end of a loss. There was no destroyed opponent. No belt, either.

Her rival, Yana Kunitskaya, was ruled the winner of the fight by submission after Evinger was erroneously warned to remove her foot — the only thing preventing Kunitskaya from locking in an armbar — from Kunitskaya’s face by official Mike England.

Evinger, of course, appealed the fight’s outcome, and the governing commission saw what she and many other fans did. The result was overturned. Evinger was given her belt back.

“I go back and watch the fight again and I’m like, ‘Holy shit, that all happened so fast,’ like, I didn’t realize it happened so fast because in my mind it went slow motion,” Evinger told Combat Press. “I knew that [the referee] messed up, but the point of me knowing something — and we see it all day long in MMA — the point of knowing something is wrong and they fucked up, to actually getting something overturned just doesn’t happen. I just really didn’t think I had a chance of getting it overturned. I was like, ‘Fuck, I seriously just lost this fight because of this stupid-ass call that was ridiculous.

“It was one of those things where I guess it needed to happen. It definitely changed a lot of things in the sport. For the sport to grow, it had to happen. Certain things have to happen. There’s a million gray areas in the rules and a million possibilities that could happen, but they haven’t, so they hadn’t come up to question.”

This is, obviously, a Tonya Evinger story, and a Tonya Evinger story doesn’t end without a few fans attacking her on social media and her, being ever so gracious, responding to them with her opinion on the whole matter. It’s what made her into one of Invicta’s most colorful personalities. She isn’t afraid to speak up and say what’s on her mind.

“So I see someone post something, ‘Well, it’s never been overturned like that, and since it’s the first time it didn’t happen, it should’ve never happened.’ I’m like, what the fuck? Are you completely stupid? That’s the most ignorant way of thinking,” said Evinger. “That’s why a sport will never grow. And then people want to talk about, ‘Well, you tapped.’ Yeah, it’s called chain of events. This happened to make that happen. No shit, I tapped — my arm was going to fucking break — but I shouldn’t have even had to tap because I was already freaking out.

“I wasn’t doing anything illegal. It was such BS, but every sport has gone through this process. You have instant replays for a reason in certain sports because of this kind of situation. You can’t just go off a judge’s call or a judge’s that. At the end of the day, you have referees who don’t have to take any kind of test [or] have to know anything. They just have to know, ‘These aren’t the rules. You can’t do this, this or that.’ Well, she elbowed me in the back of the head after I took her down, three straight times — didn’t get in trouble for that. She used her feet to get the damn armbar — her damn toes in the cage, which is illegal. And he even called her to get her toes out of the cage multiples times and she still used it to get the armbar. At the end of the day, I didn’t do a single thing wrong and she did two illegal moves.”

The the inconsistencies, follies and straight up head-scratching moments you see out of trained professionals can be maddening. Imagine how a fighter must feel. Wins and losses, championships and future opportunities are at stake. It’s become all too commonplace for a fighter to talk about a call a referee made in their fight instead of talking about the fight itself.

“We all know the rules,” Evinger said. “I don’t care if you give a warning, two warnings, and then you’re gonna take a point on the third warning. I don’t give a shit if you don’t give any warnings at all. Just be consistent. If you come into the rules meeting — and we have this — referees come in and say, ‘You know the rules. I’m not going to warn you. If you punch to the back of the head or you grab the cage, I’m gonna take a point.’ That’s what I expect as an athlete then. I expect you to do what you said you would do. You got to be qualified, and it seems they’re not.”

The past can’t be changed. The future, though, is not yet written. However, a chance for vengeance is on the horizon. Evinger is set for a rematch with Kunitskaya for the bantamweight strap at Invicta FC 22 in Kansas City, Mo., on March 25.

“I’m tired of hearing her corner and her team and her talk shit,” said Evinger, “and I’m sure she’s tired of hearing my team talk shit, but we’re about to settle it. I think I took the whole situation really respectful. I didn’t down her. I didn’t run my mouth online. I didn’t do shit. I protested the fight, it turned over, and next thing I know it was nothing but hate from her side. Just shit talking.

With a victory, Evinger would notch yet another defense of her belt and improve her unbeaten streak to nine wins in just over six years. It’s quite the track record. You’d think it wouldn’t go unnoticed. However, the UFC sure seems to be doing a good job of ignoring it.

“Alright, I’m going to make this clear so people don’t twist my words,” said Evinger. “Obviously, I want to go the UFC. I want to make money [and] I want to fight on the biggest platform. That’s the whole reason you compete, is to go as far as you can. But at the end of the day, I don’t feel like I should beg to someone to fight for them if they don’t want me to fight for them. I haven’t been approached once by them. I’ve done everything I could to be a spot on their radar so they could pick me up. I’m not gonna sit and cry about it any longer. I’m happy with Invicta. I’m literally in a spot I dreamed about being.

“I’m a world champion. I’m winning fights. I feel great. It doesn’t matter if these fanboys from the UFC don’t think Invicta’s shit. They don’t know what they’re talking about. Go look at UFC’s roster and see how many are from Invicta. Look at the strawweight division. I’m happy where I’m at, and I’m where I need to be.”

Evinger is respected by Invicta FC, and she can’t ask more as a fighter. If the UFC calls, they call. If they don’t, they don’t. Either way, Evinger is going to bring the style of fighting she calls “filthy” with her to the Invicta cage every time. After all, she has some more boxes to check off.