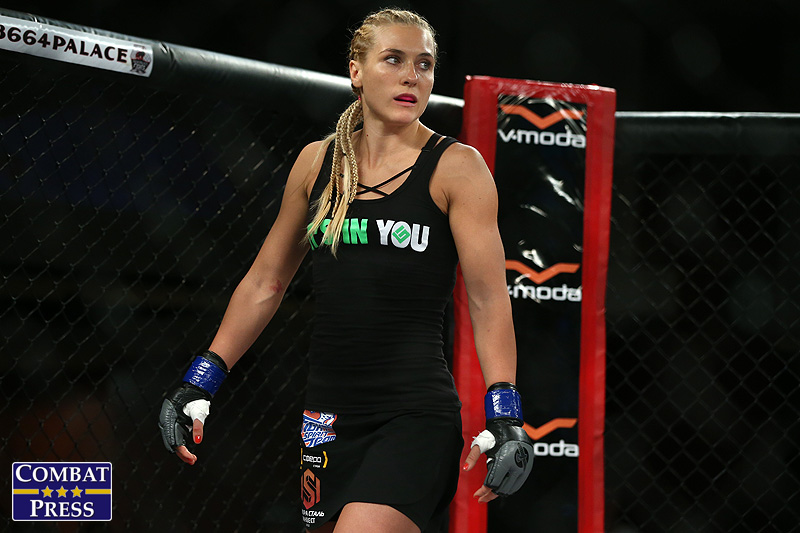 Unfortunately, I was unable to see the Open Fighting Championship 2 fight between Zaira Dyshekova and Irina Degtyareva. When I initially wrote about the fight, it showed as being streamed on YouTube. However, for whatever reason, that changed at some point and the stream was put on a site I am unable to access. Dyshekova won via a third-round submission that put her one step closer to a possible call-up.

So, let’s look at the UFC fights.

O’Neill defeated Dobson via TKO in the second round.

This fight started as expected, with both ladies coming out swinging. O’Neill did exactly what I was wanting to see from her: she came out aggressively and stalked down Dobson, showing no signs of any Octagon jitters. Dobson landed some very good power shots, but O’Neill was having a little bit more success.

The fight then went to the ground and got a bit sloppy. O’Neill was on top and landing punches, but she was being loose, looking to just land. She didn’t really establish any type of positioning. This allowed Dobson to move around and avoid anything too serious. Dobson did well to survive, but it was a clear O’Neill round.

In the second frame, O’Neill fixed the control issue. I wanted to see Dobson try to force a clinch and put O’Niell’s back to the cage. She is very good in that situation. Had she been able to do that, she could have had success. Instead, O’Neill got it down and this time established a dominant position.

Then, whether by design or just by circumstance, O’Neill did something smart. Dobson was trying to use her feet and kick off the cage to escape or sweep, but O’Neill had her butt positioned on Dobson’s hips. In doing so, she prevented Dobson from using her hips to kick off, which eliminates a large portion of the explosiveness that Dobson could muster. Dobson didn’t quit trying, though. She showed her heart and toughness, but eventually O’Neill was able to land enough shots to cause the referee to step in.

What’s next for O’Neill? Perhaps the winner of the upcoming fight between Montana De La Rosa and Mayra Bueno Silva? They will be on the same timeline, and it’s a good next step up for the undefeated O’Neill.

Kunitskaya defeated Vieira by way of a unanimous decision.

This is the one I really want to talk about, especially regarding round three.

The first round made it clear from the start that Vieira didn’t have an interest in standing with Kunitskaya. The Brazilian forced the clinch right away and secured the takedown after some resistance from her opponent.

From the top, Vieira controlled the round. She was more interested in trying to advance and look for submissions, so she didn’t throw a lot of strikes. I think she was confident the submission would come and therefore had a one-track mind. Kunitskaya, to her credit, was able to avoid any damage and prevent the submissions from getting too close. The frame went clearly for Vieira, but Kunitskaya ended it with a definite confidence boost.

In round two, Vieira forced the clinch. Kunitskaya had great defense, though, and Vieira couldn’t get the takedown. She resorted to trying to muscle Kunitskaya down, but this is the worst thing she could have done. When you try to get someone down just using your strength, then you are usually using only your upper body. You are not using your legs — think of the phrase “lift with your legs.” This is much more physically exhausting and is going to sap away some energy. The other negative is that your legs are not usually turning with your upper body. The end result is what we saw: Vieira got the takedown, but Kunitskaya was able to land on top.

Kunitskaya was great in this position. While I was wanting her to try to stand, she was doing fine and landing ground-and-pound. She gave her counterpart no time to rest or set up anything from the bottom. She kept Vieira on the defensive and herself out of danger. It was a great round for Kunitskaya — almost a 10-8.

Now, we get to the key third round. I scored it for Vieira. She got the takedown quickly and stayed on top. I have seen people say she wasn’t improving her position, but that is incorrect. Improving position does not always mean moving to side control or getting mount. To be fair, some strikes from Vieira would have been ideal. Had she done that, then there would be no doubt about the round. It might have opened up submission attempts, too. However, she still remained on top till the closing seconds. Kunitskaya was able to escape at the end and land some punches to finish strong, but it was a Vieira round in my eyes.

I saw people on social media praising the scoring of the round by the judges, two of whom scored it for Kunitskaya. I disagree, though. How often do we see people say they hate when someone dominates on the feet for four minutes and then their opponent takes them down in the last minute, does nothing, and gets the round? We see that very often, and it’s a valid complaint. I agree with it. Judges should score the whole round and not just the last minute. They need to award the round to the person who was dominant for most of those five minutes.

Was the score here almost a mirror of that? Did we not see someone control the first four-plus minutes only to have the judges reward the person who won the last minute? Yes, I know Vieira did not throw punches. However, she still controlled the round. She was on top and improving her position, even if it was ever so slightly. It is a great skill to hold someone in place for four minutes when they are doing everything they can to escape.

I am guilty of seeing this from a grappler’s perspective, of course. It’s my base and my background. I will get some hate for this point of view. I expect some tweets. That’s OK. I welcome and encourage those responses. I love engaging and talking. Just be respectful. I love to have respectful discussions about the sport, even when the person doesn’t agree with me. Maybe I can make you see something you didn’t, or maybe you can make me see something I didn’t.

I also want to make sure to not take anything away from Kunitskaya. I was really impressed with her in this fight. Almost the entire contest was spent in Vieira’s world, and Kunitskaya still held her own. She survived against a great grappler and even had big moments of success. I just disagree with the scoring of round three.

What’s next for Kunitskaya? Maybe Sara McMann. Usually you want to match up people coming off wins, but McMann makes some sense.