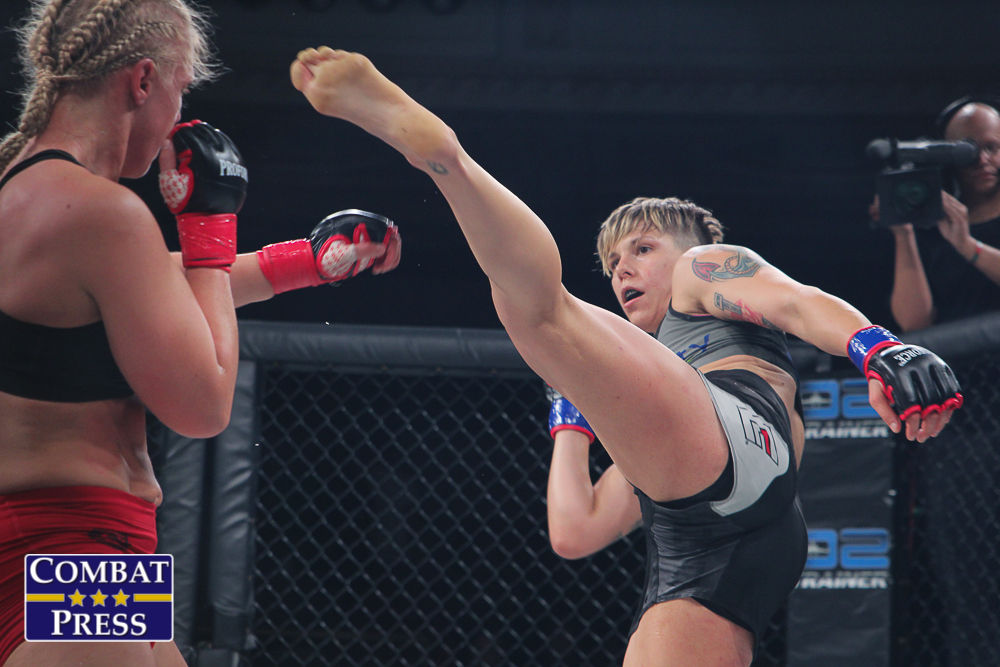 UFC Fight Night: Brunson vs. Holland was cut from three female fights to two when Julija Stoliarenko fainted twice on the scales, forcing a cancellation of her bout with Julia Avila.

I am going to do things a little differently this time. I’ll briefly go over Macy Chiasson’s victory over Marion Reneau, but then I really want to get into Montserrat Conejo’s victory over Cheyanne Buys. There was a lot of talk during and after the fight, and I have some opinions I want to zshare about that.

Chiasson defeated Reneau via unanimous decision, but I really liked how Reneau started the fight. She fought at a safe, comfortable range where she landed some nice kicks and really had a good game plan. It was initially confusing Chiasson as well. Perhaps Chiasson expected Reneau to shoot in sooner?

As the first round progressed, Chiasson started having success and was able to get the clinch that I expected out of her. They both did some good things in the clinch, though. If Chiasson had gone to the Thai clinch, then she could have really taken over. However, Reneau was doing something smart and important: over/unders. She had one arm hooked under Chiasson’s arm and one hooked over, which made it very hard for Chiasson to bring her hands up for the Thai clinch.

Round two was big for Chiasson. She was landing really well on the feet, whether it be in exchanges or the clinch. Reneau was really hurt by a strike once or twice, and what worked well for her in round one suddenly wasn’t there for her in round two. Chiasson was able to get to a range that worked for her, and it made the leg kicks harder for Reneau to get off. In the first frame, Chiasson showed Reneau too much respect. In the second, she realized that wasn’t going to work.

Round three was actually closer than I expected. After what we saw in round two, I really felt like Chiasson was going to completely take over. She did do well, but Reneau showed her toughness. Not only did Reneau not fold, but she became a bit more aggressive. Chiasson was definitely winning the stand-up battle, but it wasn’t entirely one-sided. Reneau did go for a takedown, which I felt could be smart but also risky given Chiasson’s long legs. Chiasson can grab a submission out of nowhere with those legs. Reneau got it down, but she might have relaxed a bit and allowed Chiasson to survive and actually end on top.

Chiasson took the third round and the decision, but this was a really great fight. The only reason I’m keeping it brief is because I want to talk a lot about the other fight.

What’s next for Chiasson? Alexis Davis is coming off a recent win. She makes a really good veteran test for Chiasson.

Conejo defeated Buys by unanimous decision. Let me begin by saying that I have no dog in this fight. I am just an unbiased observer. I am not really interested in breaking down the action itself, because there is other stuff I want to discuss.

First and foremost, I was shocked at the betting odds. I get Buys being favored, but those odds were insane. I felt like everyone was discrediting Conejo in what was a 50/50 fight to me.

Conejo repeatedly tried and succeeded in getting the same takedown, what you have seen referred to online as a “headlock takedown.” I have seen this move called “basic” and “something you learn in the first few months of training.” Well, maybe the takedown itself is something learned early on, but that is also not doing it justice. To get the takedown and land in the same dominant position repeatedly is not easy. There is a skill in landing exactly how and where you want time after time after time, especially when your opponent knows it’s coming.

Furthermore, to call this takedown so basic is insulting to Buys. What are you saying about her if she can’t stop something that is supposedly so basic? Buys tried to defend it. She was doing what she could to avoid it, but Conejo kept hitting it. Buys deserves better than to have it implied that she can’t stop a basic maneuver. Conejo also deserves better than to have something called basic that she does well and that is not easy.

Then, there’s the implication that Conejo only does that one thing. Incorrect! When you can win comfortably with one thing, why do other things? Why should she stand up and fight on the feet with Buys? Buys has the advantage there. If this had been a three-round kickboxing match, then Buys was likely going to win. When we get in the cage, we have one objective: to win. It’s not about showing your range of skills or spending time fighting to an opponent’s strength. It is about winning. Conejo identified where she could win and went there.

When a basketball player is on fire from three-point range and the other team can’t guard him, is he supposed to start dunking just to show he can? Is he supposed to start passing up the shot and giving the ball to someone else just to show he can pass? No. He’s going to keep throwing up those threes as long as they are going in. You show your other skills when your other skills are needed.

It’s interesting that when someone is piecing up an opponent on the feet and then suddenly gets a takedown, we hear people ask why they did that. “He was doing so good on the feet, but now he’s letting him recover,” they say. But why isn’t it ever the other way around? Why here, when Conejo is dominating on the ground, was she expected to stand and let Buys have a chance to do what she does best? Conejo had an advantage. She knew she had an advantage. She took advantage of that advantage.

Now, let’s talk about the claims that Conejo wasn’t looking to finish the fight. That is also incorrect. What Conejo was doing is what I always preach: be patient, don’t rush, and don’t force anything. Buys was defending really well, which meant Conejo had to have a lot of patience. If Conejo sensed Buys letting go of her body lock at any point, then she would start going for the keylock grip. You don’t go for that unless you are trying to submit your opponent.

This is where we have to give Buys credit, because she knew what the next step from Conejo was going to be and prevented it. Buys has a ground game, but she was forced to use it defensively in this contest. Just because there are no obvious visual attempts at a finish doesn’t mean there are not steps being taken to try to get the submission. Conejo wanted to tap Buys, but Buys was very smart on defense. We were witnessing a great chess match between them, with Conejo wanting to get something and Buys knowing and preventing it from happening. Maybe it’s because I am a grappler, but I absolutely loved what I was watching.

So, let’s talk about the post-fight shenanigans. There is a belief by some that Conejo spit on Buys. From the angles I have seen, there was no spitting. This doesn’t mean it didn’t happen. If it did happen, then it is disgusting and there is no excuse for it. A short suspension for Conejo would be justified.

The more popular belief is that Conejo called Buys “puta.” Feel free to look it up, as I don’t care to discuss its meaning. Now, for me, there’s no excuse even for that. If you’ve followed my career at all, you’ll know that I have never once talked trash and have been friendly with my opponent after several of my fights. I am not a fan of such language, but I also am not going to sit on my moral high ground either. We see male fighters often call opponents some pretty mean, rude and vulgar names in interviews and on social media, usually to zero outrage. I don’t think we can then turn around and be outraged when a woman does it.

In the end, all of this is a shame, because I thought it was a really fun fight. I enjoyed watching it unfold. Conejo is legit, and she showed it. Buys has a lot of potential, too. The young fighter will learn from this and bounce back.