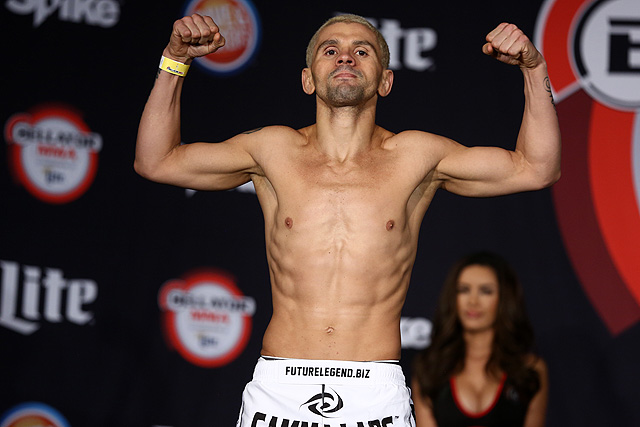 On Friday, June 17, Bellator MMA will host its 156th event from the Save Mart Center in Fresno, Calif.

In the night’s main event, bantamweight champion Marcos Galvao will rematch former training partner Eduardo Dantas. The pair met previously at Bellator 89 in 2013, with Dantas earning a second-round knockout of his countryman. Dantas would lose the title to Joe Warren in late 2014, which allowed Galvao to once again challenge for gold. He submitted Warren via kneebar to set up the rematch with Dantas. The pair were originally expected to meet at Bellator 150 earlier this year, but the fight was scrapped at the last minute due to illness.

The event kicks off Friday at 8 p.m. ET with a live preliminary card stream, while the four-fight main card follows at 9 p.m ET live on Spike.

Above is live video of the event’s weigh-ins (courtesy of Bellator MMA) which kick off at 8 p.m. ET on Thursday.