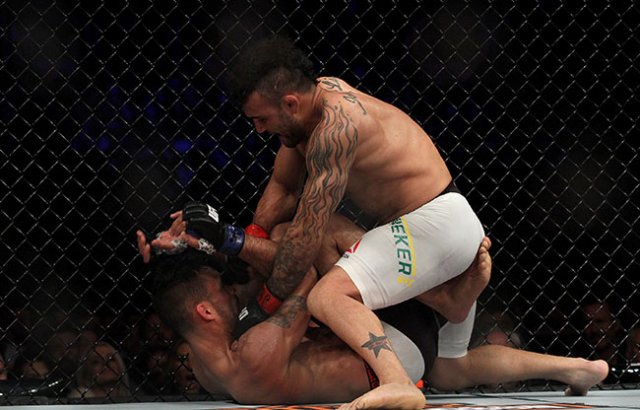 The showdown will headline the event, which is aptly named given that the two Brazilians have a heated rivalry that has erupted into a war of words on more than one occasion. Lineker puts the blame for the rivalry square on the shoulders of the champ, after an exchange on social media turned sour.

The verbal battles have only gotten worse as time has gone on, and it even got to a point where the reigning divisional king said that he’d fight Lineker on the street. A proposition that the title challenger scoffs at.

“Bibiano saying he would fight me even on the street is a delinquent attitude,” said Lineker. “MMA has evolved a lot. In the old days, there was a lot of this thing, to solve [issues] on the street or invade other people’s gyms to solve it based on strength. But not today. Today, MMA is a professional sport.

“I’m not a delinquent. I get in the ring to fight for my family, for myself, and for the sport. Before, fighters were called outcasts because of attitudes like this. And, Bibiano saying he would fight me on the street doesn’t help at all. As I said before, I’m not a delinquent, I’m a professional, and I fight in the ring.”

When it comes to the matchup inside the Circle, the American Top Team product knows he’ll have to contend with Fernandes’ incredible grappling en route to winning the gold. Lineker, known for his brutal bodywork and knockout power, will need to keep the bout on the feet to upend “The Flash” and begin a new era in the bantamweight division.

“He’s a black belt, a Jiu-Jitsu world champion, and has very good grappling, but I’m very confident,” said the 31-year-old. “I’m training really hard to nullify all his takedown attempts and all his attempts to take my back. This is my moment, and I believe he’s never fought a guy like me – an aggressive guy who never backs down, who walks forward all the time and has very heavy hands. My opponents know this very well. So my confidence is in what I can do and what I’ve done in my past fights. And what I can say is that I’m very prepared to nullify any submission attempt by Bibiano.

“I don’t feel threatened by his striking. Him saying he’s going to knock me out is one thing. Getting it is another. I think 70 percent of the opponents I faced also said they were going to knock me out. Some even said that I would see the real stone hands. But when you get in the ring, the story is different, the strategy changes, and, when they feel my hand, they realize they will have to put me down.”

With the feeling that Fernandes’ time has passed, Lineker is focused on kickstarting his reign with another highlight-reel knockout. The Parana native hopes that, after years of working on getting to this moment, his time on the global stage will culminate with the ONE bantamweight belt over his shoulder.

“As in all my fights, I go to knock out my opponents,” said Lineker. “I don’t like to leave the decision to the judges. Sometimes, it happens, but I always try to finish the fight before the full fight time.