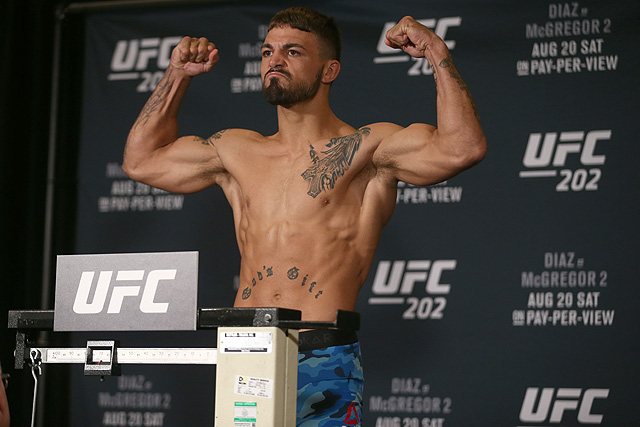 There comes a time in life where it seems like everything just fits together the way it was imagined. The combination of getting the right job, the right girl and perfect home is one example. In the sports world, it could be the routing underdogs with the comeback of a century. In the MMA world, the number of variables that need to occur for this to happen are limitless. The sacrifices. The timing. The training. Knowing or not knowing the right people. Health. Family. The list goes on and on. So, for an amateur fighter to make his way through the ranks and countless opponents and reach their ultimate goal of a UFC contract, it seems like a pipedream. Another wasted venture, so to speak. That didn’t stop Mike “Platinum” Perry.

Perry first began his amateur career in 2011. It was then that his dreams of becoming a UFC star were born. He never looked back. After winning five of his seven amateur bouts, Perry began his tear as a professional fighter. It didn’t take long for the fans and UFC President Dana White to take notice. His entrance into the UFC proved that the decision to bring him in was not only beneficial, but that the timing could not have been any better.

The concept of trash talk is not foreign to the sports world, but it’s prominence in MMA is on a different level. The world will never see Tom Brady and the Patriots calling out another football team or boasting about how much better they are. The PR team does a good job of putting a halt to that. Before the age of Twitter, fighters would trash-talk their ways into titles using the minute or so of post-fight speeches or even the limited media to further their career. With the technology age we’re in, it’s easier than ever for two fighters to stir up a fight that benefits both themselves and the fans.

The co-main event of UFC Fight Night 116 was supposed to pit Mike Perry against Thiago Alves. That fight did not end up happening. Alves was forced to withdraw and Perry took on Alex Reyes, who took the fight on less than three days’ notice. The fight itself became a lose-lose for Perry and a possible upset opportunity for Reyes. However, Reyes did not score the upset. Instead, Perry steamrolled his opponent in just 79 seconds.

With Perry’s victory, he moved no further in the division, though. Reyes normally competes at lightweight and took the fight on short notice. Perry’s victory over a non-factor in the welterweight division did little to change his own stock, no matter what it added to his highlight reel.

Instead of complaining, Perry used his time on the mic wisely. He also employed the use of social media to call out former UFC welterweight champion “Ruthless” Robbie Lawler. The idea seemed insane at the time, but really this is the time for Perry.

Perry is brash, cocky, controversial and arrogant at times, but he backs up every single attribute with his performances inside the cage. Since August 2016, Perry has fought five times, only suffering a decision loss to Alan Jouban. His other four fights have ended in vicious knockouts or technical knockouts.

The reason that this is the time for Perry is thanks to Conor McGregor. The comparison is a reach at best, sure, but look at the two of them. Young. Brash. Bold. Cocky. Both of them have been able to get themselves into fights that they want.

As of right now, there are quite a few UFC welterweights calling Perry out and some that Perry has called out. There are Carlos Condit, Thiago Alves, Emil Meek and Colby Covington, just to name a few. It’s Perry’s brash attitude, in addition to his incredible talent for showing his opponents the world of unconsciousness, that is getting him the attention he needs. His use of Twitter has been nothing short of brilliant. All this from a man who hasn’t even turned 30 yet.

The days of Ronda Rousey have passed. The days of Jon Jones have passed. Who knows if Conor McGregor will ever fight again. Whether the fans like him or not — and his and his corner’s forays in racist territory have many leaning toward the latter — Perry has become a face to continue watching in this division. If Perry continues to steamroll his way through the division, it’s only a matter of time before “Platinum” and gold become one.