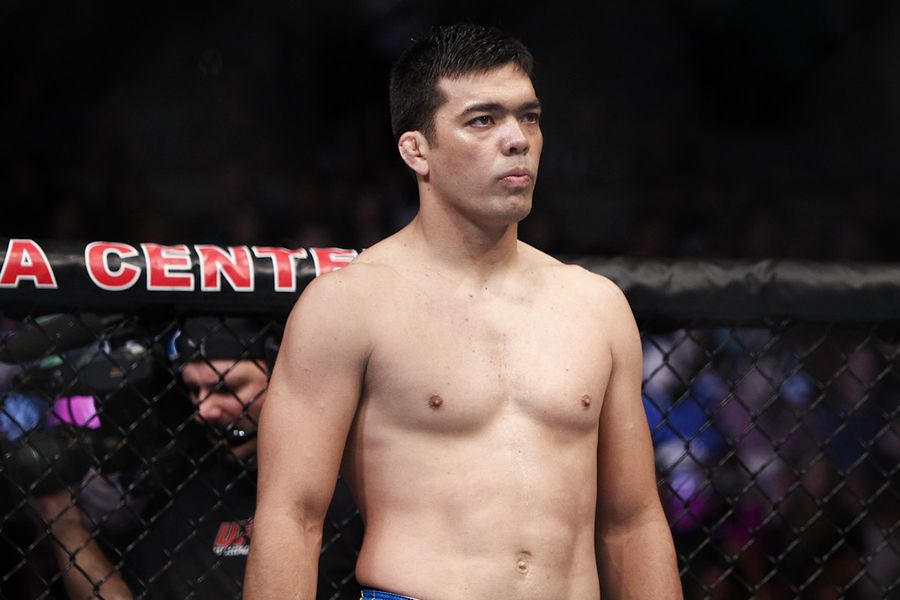 Brazilian Lyoto Machida triumphantly rebounded from his title loss earlier in the year, demolishing C.B. Dollaway in just over a minute. Dollaway marched forward looking to disrupt the timing of Machida. Machida patiently waited for his opening, connecting with a kick flush to Dollaway’s liver. Dollaway crumpled along the cage and turtled up as Machida flurried with punches, forcing the referee to halt the contest.

Former bantamweight champion Renan Barao methodically wore down challenger Mitch Gagnon and coerced a submission win via arm-triangle choke. Barao used his reach advantage in the first round to score with his right hand. Gagnon fired back and looked to clinch. Barao easily shrugged him off and dropped him with a left hook. Gagnon survived and continued to look for takedown attempts in round two. Barao landed the fight’s first takedown in the final frame. Late in the round, Barao put Gagnon on his back once more, passed to mount and locked in the choke.

Light heavyweight Patrick Cummins used his superior wrestling to control opponent Antonio Carlos Junior from bell-to-bell. Carlos Junior landed a big knee from the clinch early in the fight, but Cummins took him to the mat. The Brazilian countered with a heel hook attempt, but Cummins escaped and scored with punches from the top. In round two, Cummins earned another takedown and controlled the fight from the top position. It was more of the same in round three, as Cummins briefly mounted Carlos Junior. Carlos Junior rallied late, but it wasn’t enough, as all three judges rewarded Cummins for his efforts.

Dagestani lightweight Rashid Magomedov handed Brazilian Elias Silverio the first loss of his career, earning a third-round TKO win. Silverio came out the aggressor, but it did not take long for Magomedov to establish his range and timing. He peppered the body of Silverio with kicks and scored with counter right hands. Rounds two and three were very nearly identical to the first stanza, as Magomedov repeatedly landed counter strikes. Late in round three, Magomedov dropped Silverio with a jab. He flurried for the finish and got it with just three seconds remaining in the fight.

Welterweight Erick Silva wasted little time putting Mike Rhodes to sleep. Silva threw a spinning back fist at the opening bell, but quickly secured a takedown. He passed to side control and set up an arm-triangle choke. Rhodes tried to defend, but ending up going unconscious.

Daniel Sarafian made a successful return to the middleweight division with a bizarre win over former training partner Antonio dos Santos Jr. Sarafian came out throwing big shots, including a head kick. Dos Santos took it well and countered to put Sarafian on the mat. As the first round wore on, dos Santos frequently scored with counter strikes. In round two, dos Santos tried to block a punch with an open hand and dislocated his left ring finger. He tried to ask for time to put it back in place, but the referee waived off the bout, handing Sarafian the TKO win.

Marcos Rogerio de Lima stopped veteran Igor Pokrajac with punches in the first round of their light heavyweight match-up. “Pezao” closed the distance early and pressed Pokrajac against the fence. When they were separated, Pokrajac barreled forward and absorbed a huge left hand from the Brazilian. Pokrajac crashed the mat and de Lima rained punches to force the stoppage.

Stepping in on just two week’s notice, Brazil’s Renato “Moicano” Carneiro dispatched of Finland’s Tom Niinimaki via rear-naked choke. Moicano used his reach advantage to stifle Niinimaki in the opening round. It was more of the same in round two until Moicano landed a big left that rocked Niinimaki. Moicano followed him to the canvas and quickly took his back to sink in the fight-finishing choke.

Featherweight Hacran Dias ended a two-fight skid with a dominant performance against Darren Elkins. Dias landed with combinations early, before planting Elkins on his back. That set the table for the rest of the fight as the Brazilian showcased his takedown ability with regularity against the wrestler Elkins. Elkins desperately looked for a finish in the final frame, but it wasn’t enough as Dias got the nod on the scorecards.

Lightweight Leandro Issa snapped the eight-fight winning streak of Japan’s Yuta Sasaki with a second-round submission. Brazil’s Issa scored early with right hands before taking the fight to the ground. He threatened with a kimura, but Sasaki survived the opening stanza. Round two saw Issa again take the fight to the ground, but was forced to defend a D’arce choke from Sasaki. Once free, he took Sasaki’s back and coerced a tap via neck crank.

Welterweight Tim Means survived some questionable officiating and questionable judging to walk away with a split decision win over Marcio Alexandre Jr. Means connected with a big knee in round one, but the referee paused the action because he thought it was illegal. The fight continued and Alexandre scored with a head kick. Means kept the pressure on in the final round, battering the Brazilian with punches to seal the victory.

Brazilian Vitor Miranda spoiled the UFC debut of former RFA champion Jake Collier with a tremendous comeback win. Collier dominated the majority of the first round, keeping Miranda on his back. However, in the waning seconds of round one, Miranda worked back to his feet and delivered a violent head kick that sent Collier crashing to the mat.